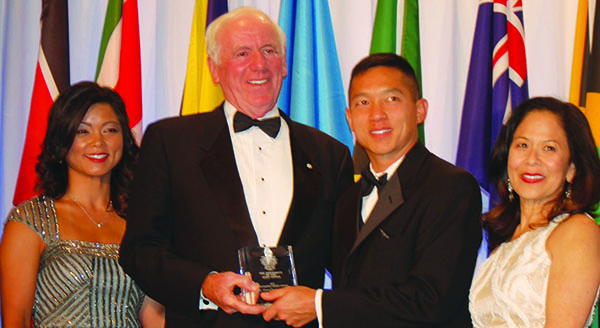 TORONTO, Ontario – The family of G. Raymond Chang, continuing the role he held as patron of the Sixth Annual University of the West Indies Benefit Gala in Toronto, has presented the inaugural G. Raymond Chang Award to a business and community leader who embodies the qualities for which he stood.

Chang was patron of the gala since its inception and passed away in July 2014.

“Tonight, we remember with great love and fondness our inspiring founder and patron, G. Raymond Chang. Andrew, Brigette and I are honoured to continue Ray’s legacy in the role as patron,” said Donette Chin-Loy Chang at the gala held at The Ritz-Carlton in Toronto on March 28.

The recipient of the inaugural award, Charles S. Coffey, has a 44-year career with RBC and has been a champion for children and early childhood development, young people, Aboriginal peoples, women entrepreneurs and women in public office, as well as education and diversity.

Brigette Chang-Addorisio, daughter of Ray Chang, speaking on behalf of her brother, Andrew Chang, announced that the award is to “an individual who exemplifies the leadership and ideals for which our dad stood; hard work, humility and a commitment to the betterment of communities in Canada and abroad.”

“The tears I’m sharing with you are, yes, tears of sadness on the loss of Ray but also tears of happiness for the legacy and the next generation that he has left,” said Coffey to them.

“Ray Chang was a role model for me. He gave so much to so many, not only of his time but of his resources and I’ve tried in some little, small way, to emulate Ray Chang.”

Coffey was the seventh of nine children in a very strong Catholic family in New Brunswick and his mother taught him at a very early age the importance of social justice issues.

“Throughout my career I focused on trying to help others not with a hand out but with a hand up, so to speak, and I’ve championed many causes.”

The former executive vice president, government affairs and business development for RBC is an Officer of the Order of Canada, and was named an honorary chief by the Assembly of Manitoba Chiefs for his support of First Nations, economic development and self-sufficiency.

Dr. Sheldon Levy, president and vice-chancellor of Ryerson University who was to retire this year but whose tenure at the university was recently extended by two years, was the Gala Co-Chair, alongside Dr. Herbert Ho Ping Kong.

Elizabeth Buchanan Hind, executive director, Institutional Advancement Division and Chair of the UWI Toronto Gala, said the gala committee has worked to ensure that Ray Chang’s legacy lives on and that the gala remains at the level that it was when he was here physically.

Each year the Scholarship Fund awards 35-40 scholarships, said Buchanan Hind, who noted that the university is very impressed with the support the gala receives.

Rojel Bradford, 23, a 2014/2015 scholarship recipient who is pursuing a Bachelor of Medicine and Surgery degree in the Faculty of Medical Sciences, said he is determined to succeed in his studies.

“You have granted me the opportunity to be the first person in my family to attend university, let alone to become a doctor. This scholarship has reached into the future and has touched many generations by simply giving me a chance,” he said.

The UWI Scholarship Fund is for outstanding academic achievers in the Caribbean who lack the funds to realize their potential. Since its inception, it has raised funds for approximately 200 scholarships.

The event also celebrated the contributions of the UWI, its graduates and the Greater Caribbean community in Canada and worldwide.

Denise Herrera Jackson, CEO of the Scotiabank Caribbean Carnival Toronto, accepted the chancellor’s award given to a Canadian organization that has contributed to the UWI and/or the Caribbean or outstanding organization owned by people of Caribbean heritage.

Anne Sado, president of George Brown College, also received a chancellor’s award, noting it acknowledges the work that the college has done in Jamaica.

“It really speaks to the partnership that we’ve had for many years in a number of programs so our students in early childhood education go down every January for a month, they work with the basic schools and one of the teachers colleges and they have helped implement a number of standards for early childhood education, which I’m sure have benefitted the children of Jamaica,” she said.

Social service worker students, community worker, child and youth care students accompanied by faculty all go down for placements of up to six weeks.

The college’s new initiative is with the Nine Miles of Smiles charity where dental hygiene students travel to Jamaica. Sado said George Brown is hoping to expand that to other Caribbean countries and to working with the UWI.

Bailey was born in England and started his education as a child in Barbados. He migrated to Canada at age 8 and attended university in Toronto but said he is aware of the respect that the UWI commands throughout the region and the world.

Dr. Chandler-Crichlow dedicated the award to her parents, noting that they instilled in her a strong ethic for work, family, spiritual wellbeing and community involvement.

“There’s a very compelling call arising – we’re no longer in the 60s, we’re in 2015 – and it comes from the refugee camps around the world. And it’s the story of the tens of thousands of young people who are now coming up in those refugee camps without an education. This obviously disturbs us, as educators, as people who are humanized to have expectations. But, more so, it calls us because it means that we are creating a society, which will include many people who will not see themselves with opportunity, and therefore will become breeding grounds for the most heinous of doctrines. And so, this is the challenge that we must carry, all of us, that we must work towards satisfying,” said Justice Westmoreland-Traore.

Born in Jamaica, Shaggy left the island at 18 to join his mother in Brooklyn, New York, where he began performing with Gibraltar Musik, a local Jamaican-style sound system.

“One of the reasons why I decided to come and accept this is because you guys really do a lot – the Chang family, the UWI Foundation. You guys actually make a difference. Our foundation is The Shaggy Make a Difference Foundation and as a charity you guys make a difference,” said the artist who performed two of his songs, “Boombastic” and “Angel” with Rayvon, raising more money for the scholarship fund at the gala.

The luminary award is presented to a person of Caribbean heritage who is an outstanding achiever on an international scale in their respective field or has brought prominence to issues affecting the Caribbean.

Among the entertainers were: Declan Oliver-Santillan, Louis Saldenah Mas Band, JK Pan Vibrations, Culture Our Future, Jessica Yap, Joe Sealy and Paul Novotny. Yap dedicated one of her selections to the late philanthropist.

The master of ceremonies was Michael Anthony Cuffe, Sr. The auctioneers were Gordon Cressy and his son, Joe Cressy.