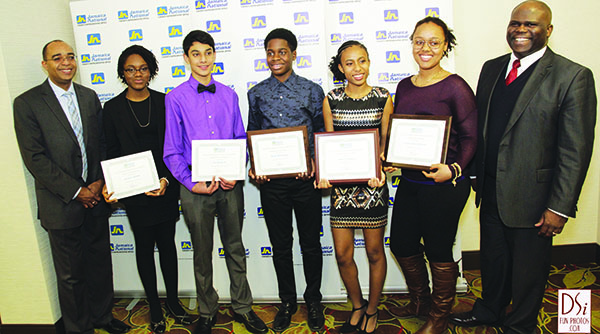 TORONTO, Ontario – Highlighting a thought provoking topic, which affects many persons deemed to be in a minority race in first world countries, and convincingly showing how she continues to push past the many labels associated with her skin colour, Tahnee Pitter-Duncan was announced as the JN Toronto Representative Office Black History Month Essay Competition 2015 winner.

A unanimous decision by the competition’s judges, the grade 12 Central Technical School high school student is the second winner of the annual competition, which was launched in February 2014.

Jerrold Johnson, Chief Representative Officer at the JNBS Toronto Representative Office, while expressing great pride at another successful staging, said the submissions showcased the challenges many young people face and how having the right mentor and influential figure can help them to defy odds, something he’s dedicated to.

“These essays really showed us just how impressionable our young people are, and how having positive role models or support systems can help to mold determined, ambitious and strong individuals who can become productive young women and men in various fields, overcoming any barriers there to hinder them,” said Mr. Johnson.

Targeting high school students in the Greater Toronto area, entrants were required to write on the theme, “Describe a person of  colour  who has impacted your life and inspired you to be a better person. Explain how you intend to apply that experience in your future”. And, Mr Johnson noted that this required entrants to write about someone of colour who has helped to shape their outlook on life in a positive way.

“This person did not have to be a public figure or widely known because of their contributions, because we do recognize that there are many unsung heroes, who in their small way, in the community or their own home, do leave lasting legacies,” emphasized Johnson.

“This competition provided students with a platform to acknowledge and celebrate the contributions of people of colour, past or present and to develop a greater appreciation for their heritage,“ he added.

Tahnee was awarded with a $1,000 bursary toward enrollment in a college, university, apprenticeship training or any vocational training after high school, and an iPad Mini 3.