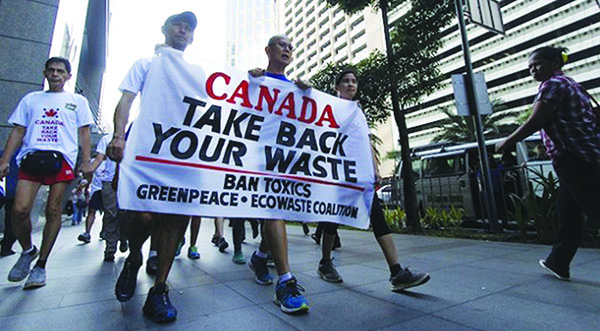 MANILA, Philippines (IPS) – Filipino Catholic priest and activist Reverend Father Robert Reyes, dubbed by media as the “running priest”, joined a protest of environmental and public health activists last week by running along the streets of the Makati Business District, the Philippines’ financial capital, to urge the government to immediately re-export the 50 Canadian containers filled with hazardous wastes that have been in the Port of Manila for 600 days now.

Along with the groups BAN Toxics, Ecowaste Coalition and Greenpeace, Reyes staged BasuRUN, a name derived from the Filipino word ‘basura’, which means trash or waste.

“These toxic wastes are the worst forms of expressing friendship between our two countries,” said the politically active and socially conscious Reyes.

Although praised by activists but criticised by the Filipino Catholic bishops, Reyes’ latest run, which ended across the Canadian Embassy located in the financial district, added another voice to the call for Canada to take responsibility for its “overstaying” toxic shipment in the Philippines.

“Prime Minister Stephen Harper’s government is an embarrassment to the civic-minded and environmentally conscious Canadians,” said Reyes. “We know this is not the real Canada. We urge Prime Minister Harper to take immediate action. Take back your illegal waste shipment now,” he stressed.

When questioned by activists, Canada said that it does not have any legal capacity to compel the Canada-based private corporation to re-export the shipment.

Richard Gutierrez, executive director of BAN Toxics, told IPS the shipment should be re-exported in accordance with the Basel Convention, an international treaty signed in 1982 with 182 parties as of 2015 that regulates toxic waste shipments.

The Basel Convention prohibits illegal toxic waste trade and requires the exporting country, in this case Canada, to take back illegally seized shipments and pay the costs for the return.

Both Canada and the Philippines are parties to the Basel Convention, but Canada has yet to respond to calls for the re-exportation of the shipment under its obligation under international law.

“Canada’s refusal to take back the illegal shipment is a blatant violation of its obligation under Basel,” Gutierrez added. “Toxic waste trade is also not simply an issue of trade or business among private individuals or companies. At its very core is the respect for human dignity. It is about protecting the right to life and health. Dumping of toxic waste is anathema to human rights.”

He said the importation also violates a number of local laws such as the Administrative Order 28 (Interim Guidelines for the Importation of Recyclable Materials Containing Hazardous Substances) of the Philippine Department of Environment and Natural Resources and the Republic Act 9003 or the Ecological Solid Waste Management Act of 2000.

BAN Toxics said the Philippine government is spending at least 144,000 pesos (about 3,000 dollars) a day for the loss of income from storage space and an additional 87 million pesos (about 1.9 million dollars) in demurrage costs to the ship’s owners.

Other activist groups in the struggle include Mother Earth Foundation, Global Alliance for Incinerator Alternatives, and ‘Ang Nars’, a party-list group of Filipino nurses who staged protests last year.

Abigail Aguilar, toxics campaigner for Greenpeace, expressed shock that the waste is still festering in a Filipino port after nearly two years.

“How the Canadian government finds the dignity to let this linger on for more than 600 days is despicable and sickening. It is best that it takes it back and not let the Filipinos suffer. [That] is the moral thing to do,” Aguilar told IPS.

“The international transfer of toxic wastes to developing countries has repeatedly violated the human rights of people who are often in most vulnerable situations, and contravened the principles of equality and non-discrimination,” the rapporteur said, earlier this year.

Tuncak said that without the correct precautions, the transfer of toxic waste is harmful to the environment and to the health of human beings, adding, “Unbridled toxic waste trade often takes place to exploit differences in the cost of labour and enforcement of laws including environmental protection.”

A 2010 study published by the U.S.-government supported scientific journal, Environmental Health Perspectives (EHP), revealed that chemical pollutants from toxic waste sites in India, the Philippines, and Indonesia “put over eight million persons at risk [of] disease, disability, and early deaths from exposure to industrial contaminants in 2010, creating a loss of 828,722 years of good health,” identified in the study as disability-adjusted life years.

The study said that the wastes in question contained an assortment of “toxic metals such as mercury, lead, and cadmium.”

A 2014 study by Ban Toxics and the Ateneo de Manila University School of Government said toxic wastes from other countries have exposed Filipinos to a number of health and environmental risks, such as hazardous e-waste and medical and clinic garbage that include a toxic brew of mercury, lead, cadmium, Polybrominated Diphenyl Ethers (PBDEs) and Polybrominated Biphenyls (PBBs).

Antonio La Vina, dean of the Ateneo School of Government, said, “We need to send a clear signal to the rest of the world that the Philippines is not a dumping ground for Canada’s [or any other country’s] toxic waste.”

He said the Canadian waste is but a symptom of a bigger problem, namely: as long as the Philippines dodges ratification of the Basel Ban Amendment, which prohibits the importation of hazardous waste from developed to lesser developed countries, it will continue to be viewed and treated as a dumping ground.

The shipment currently sitting in Manila’s port was initially described as recyclable material, but Greenpeace reports that the containers are also holding hospital waste, used adult diapers, and sanitary napkins.

Leachate from these containers, or liquid that has percolated through a solid, threaten the surrounding environment, posing great risk to human health in the area. Manila currently has a population of 1.6 million people.

An open petition on Change.org urging the Canadian government to assume full responsibility of the waste shipment already has 25,000 signatures and expects more.

According to the U.N. Commodity Trade Statistics database (UN Comtrade), 4.7 million tons of hazardous waste were shipped by developed to lesser developed countries between 1998 and 2008.