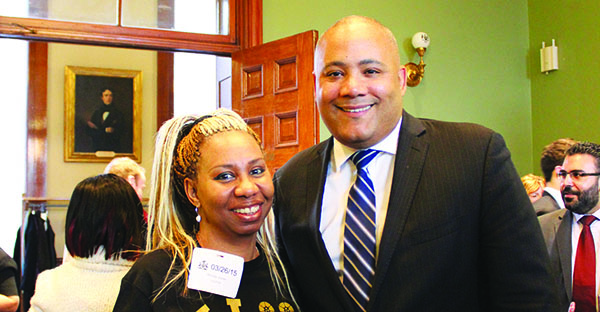 Community Organizations Get Set To IGNITE Ontarians For Games

TORONTO, Ontario – Ontarians will soon get a taste of what several individuals and organizations from the Black and Caribbean communities have to offer to ignite their interest and to connect residents and visitors with the spirit and cultural diversity of the TORONTO 2015 Pan Am/Parapan Am Games – the “People’s Games.”

Through the IGNITE Ontario program, a partnership with TO2015, the province is helping organizations and municipalities celebrate the upcoming Games with 103 initiatives.

“We are pleased to help Ontario communities celebrate and build excitement for the TORONTO 2015 Pan Am and Parapan Am Games. Thanks to the province’s support for IGNITE Ontario initiatives, residents and visitors will be able to explore, experience and enjoy the cultural diversity and spirit of the Games,” said Michael Coteau, Minister of Tourism, Culture and Sport and Minister Responsible for the 2015 Pan/Parapan American Games at a recent reception for the IGNITE Ontario recipients held at Queen’s Park.

IGNITE Ontario is part of the government’s Promotion, Celebration and Legacy Strategy to extend the benefits of hosting the Games to communities across the province.

The nearly $1 million one-time grant program is designed to support TO2015 IGNITE-designated initiatives leading up to and during the 2015 Pan Am/Parapan Am Games.

The South-North Griots Summit will take place at Harbourfront Centre in Toronto from May 27-31.

This international event will bring together culturally diverse spoken word artists — of primarily African Canadian, Caribbean, Latin American and Indigenous heritage — from across the Americas, and will complement the Pan Am/Parapan Am Games to be held in July and August.

“The Northern Griot Network has existed for some time. One of our first efforts was to promote black voices through the spoken word in Canada, so we created an exchange where poets would get to travel to other cities and perform to share our experience as Canadians, but from different parts of the country,” says Dwayne Morgan, poet, social entrepreneur and one of the organizers of the summit.

In 2013, Morgan, Motion, Nth Digri, and Eddy The Original One went to Trinidad to perform and share knowledge.

“While there, we came up with the idea of doing a summit in Toronto, where we would bring together spoken word artists from across the diaspora for dialogue, performances, and reflections on the practice, art form, and its direction,” says Morgan.

The goal of the summit is to learn best practices, network, share, and build bridges between spoken word practitioners around the globe.

“We are happy to have Yasus Safari (Jamaica), Kat Francois (UK), Winston Ferrell (Barbados), Jessica Care Moore (US), and over 40 other poets, spoken word artists, and griots participating in the summit through performances or panel discussions, he says.

One of the final panels/group discussions will involve brainstorming about what next could come from the summit.

“We would definitely love to see this as a beginning, more than a one-time event, so hopefully the synergies align for that to happen,” says the motivational speaker and spoken word artist.

Reflecting on the significance of the summit in relation to the Games, Morgan says: “While the athletes are preparing to express themselves through their bodies, there is no greater form of connection than human communication through words, especially in an increasingly cold and technological world. This summit will serve to ignite the warmth of human interaction, through words and stories, and will be a perfect departure point to the final countdown to the PanAm and Parapan Am Games.”

Nia Centre for the Arts is a Toronto-based not-for-profit organization that supports, showcases and promotes an appreciation of arts from across the African Diaspora. It creates opportunities for young people to develop healthy identities and for communities to enhance their creative capacities.

Harriet Tubman Community Organization (HTCO) will hold the Tubman Games on June 27 and 28 at the Esther Shiner Stadium and the Matanga Festival on July 19 at the Children’s Peace Theatre, both venues in Toronto.

The HTCO is a non-profit agency committed to working with young people, particularly youth of African descent.

The Friends of Fort York – New Generation Steelband Festival will be held on July 4 and on August 3, the group will present an Emancipation Day/Simcoe Day event.

The IGNITE Ontario initiatives are to motivate, engage and inspire Ontarians to participate in the Games and related activities, and to engage communities in Pan Am/Parapan Am sports and healthy active living.

They are also to celebrate the culture and heritage of the Americas and the Caribbean, which are themes of the Games, and to strengthen economic and cultural connections between Ontario and the Americas and Caribbean

The events will also foster inclusivity and diversity by involving youth, persons with disabilities, and members of Aboriginal and francophone communities.

“The TORONTO 2015 IGNITE program is making history by supporting over 650 initiatives, across the Games footprint, helping jump-start grassroots involvement in the TORONTO 2015 Games. It is a first for a Pan Am/Parapan Am Games, which will create a legacy of better, healthier, more connected and joyful communities,” said Rahul Bhardwaj, Co-Chair of the TO2015 IGNITE Program.