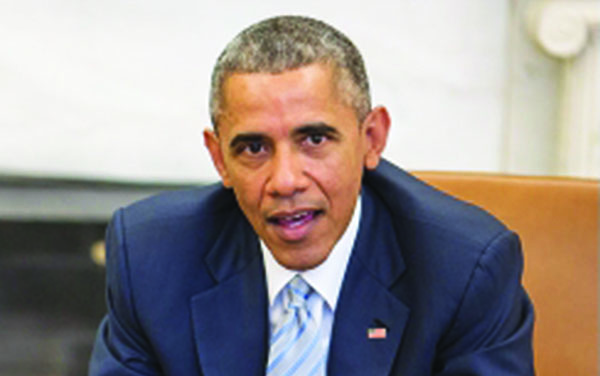 Photo above is of US President Obama meeting with advisors in the Oval Office, last month. White House photo by Pete Souza.

Obama will arrive here on Wednesday for a two-day visit and will also meet with Caribbean Community (CARICOM) leaders prior to his departure for the Summit of the Americas in Panama this weekend.

He said Jamaica’s progress within international circles over the past few years has led to Obama’s visit.

“Make no bones about it, one of the reasons that President Obama is coming to Jamaica is because of Jamaica’s improvement within international circles for the past few years. There is no question about that,” he said, adding, he hopes the visit will foster greater collaboration between the two countries.

Meanwhile, Jamaicans have been told to brace for disruptions in their daily lives as a result of the visit.

Apart from various roadblocks, the public has also been told that there will be increased aerial activity involving various types of military aircraft in and around the Kingston Metropolitan Area until Obama departs.

The authorities said the increased activity will be coordinated and monitored by the Jamaica Defence Force (JDF) and the Jamaica Civil Aviation Authority.

“Owners and operators of Unmanned Aerial Vehicles (UAVs) and Remotely Piloted Aerial Systems are also being reminded of the need to coordinate the use of these aircrafts with the Jamaica Civil Aviation Authority prior to operation, in order to avoid the aerial hazard they may pose, and are requested to abide by all notifications published by the Jamaica Civil Aviation Authority in this regard.”