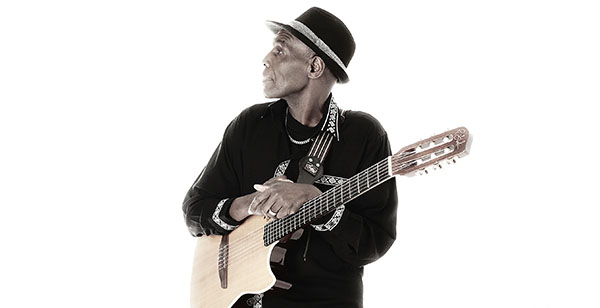 One of Africa’s musical giants and Zimbabwe’s most successful and national treasure, Oliver Mtukudzi, and his band, the Black Spirits, will be in Toronto on Saturday, April 18 for a much-anticipated performance.

The concert, which is being staged by Toronto’s Royal Conservatory of Music, will also feature special guest performer, Kinobe.

Mtukudzi, affectionately known as Tuku, is gifted with a deep and gusty voice, plus a talent for writing songs that reflect on the daily life and struggles of his people.

He began performing in 1977 and has garnered a devoted following across Africa and beyond, has produced 42 original albums, but it is his dedication to the live music scene in Zimbabwe that has also earned him the respect and admiration of the people in his home country.

A member of Zimbabwe’s Kore Kore tribe, he sings in the nation’s dominant Shona language as well as Ndebele and English.

Mtukudzi’s music is heavily influenced by a humanist chimurenga ethos, which, in turn, is inspired by the hypnotic rhythms of the mbira (thumb piano). His music also incorporates South Africa mbaqanga, the energetic Zimbabwean pop style hit, and the traditional kateke drumming of his clan.

One of Mtukudzi’s biggest fans is Bonnie Raitt, who has not only called him “a treasure,” and recorded a cover of “Hear me Lord” but also credits Tuku as the inspiration for the song “One Belief Away” on her album Fundamental.

Mtukudzi — along with Angelique Kidjo, Hugh Masekela and Ladysmith Black Mambazo — is one of the most successful African recording artists in North America, having sold hundreds of thousands of records on Putumayo, Heads Up/Telarc and Sheer Sound.

Apart from the individuality of his music, Mtukudzi’s enduring popularity has largely resulted from his powers as a lyricist. Most of his songs focus on the social and economic issues that govern people’s daily lives.

Mtukudzi has been collaborating with UNICEF Zimbabwe on a number of issues, including child and youth participation and HIV prevention. Mtukudzi’s song “Deaf Hear,” especially composed and dedicated to children at the request of UNICEFZimbabwe, was donated free of charge on the occasion of the 2010 ‘Day of the African Child’ commemorations.

And special guest artiste, Kinobe, a multi-instrumentalist and singer-songwriter, will commandeer the vocals, kora, kalimba, endongo, tama and balafon.

Born near Lake Victoria in Uganda, Kinobe began playing music as a child and, by the time he was 21, he had visited every country in Africa, studying and playing with traditional musicians.

Over the years as a touring musician, he has performed on numerous festivals along with other African artists such as Toumani Diabaté, Youssou N’Dour, Salif Keïta, Angélique Kidjo, Baaba Maal, and many more.

He has given concerts and workshops all over Europe, North America, and Africa, bringing a powerful world-roots-dance sound to festival main stages and theatres, and intimately captivating solo shows that showcase the diversity of various African traditional instruments.

His recordings include Soul Language, Kinobe & Soul Beat Africa, Nomad Soul, Together With Friends, Leaving the Song Behind, Nomad, and Tuli Wamu.

The concert, which is being held on the same day as the 35th anniversary of Zimbabwe’s independence — April 18 — is being held in Koerner Hall, 273 Bloor Street, West, and tickets start at only $25.00 each.