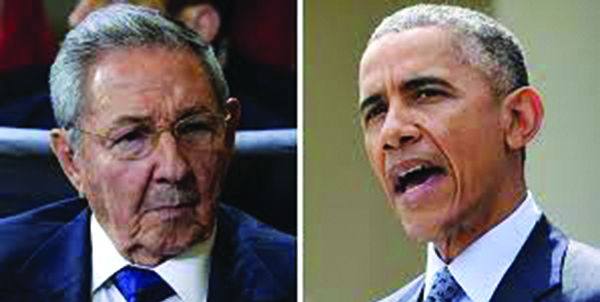 PANAMA CITY, Panama, CMC – US President, Barack Obama, and his Cuban counterpart, Raúl Castro, met here on Saturday in an historic face-to-face discussion between the leaders of both countries in a half-century.

For about an hour, Obama and Castro sat beside each other on Saturday, in a small room in the convention center downtown Panama City, where the Summit of the Americas was held.

“Our governments will continue to have differences,” Obama told reporters after the Summit concluded. “At the same time, we agreed that we can continue to take steps forward that advance our mutual interests,” said the president, who said the meeting was “historic”.

“The United States will not be imprisoned by the past — we’re looking to the future,” said Obama of his approach to Cuba at the summit meeting’s first plenary session on Saturday. “I’m not interested in having battles that frankly started before I was born.

“The Cold War has been over for a long time”, he added.

The US president also said the meeting with Castro was “candid and fruitful,” adding that he will continue working on the goal he announced in December in re-establishing diplomatic relations and reopening embassies in Havana and Washington.

However, Obama said crucial steps in the normalization process would not be completed speedily, stopping short of announcing a final decision to remove Cuba from the United States’ list of state sponsors of terrorism, saying he wanted to study it further.

On Thursday, Obama had said that the Department of State had completed its review of whether Cuba should be dropped from the list of state sponsors of terrorism.

“We will continue to have differences with the Cuban government, but we don’t want to be imprisoned by the past,” said Obama while in Jamaica, where he met with Caribbean Community (CARICOM) leaders before heading to the Summit of the Americas here. “When something doesn’t work for 50 years, you don’t just keep on doing it – you try something new.”

Cuba attended the summit meeting for the first time since its inception in 1994, creating the first publicly planned encounter of the American and Cuban presidents since 1958.

For his part, Castro said he wanted a new beginning with the US, despite both countries’ “long and complicated history.

“We are willing to discuss everything, but we need to be patient — very patient”, he said.

Castro also thanked Obama for vowing to come to a “rapid decision” on removing Cuba from the United States government’s list of states that sponsor international terrorism, a designation that has impacted Cuba’s ability to bank with the United States and some foreign creditors.