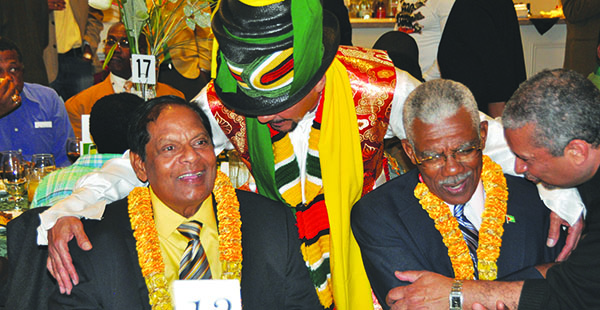 Photo above: APNU-AFC candidates, Moses Nagamootoo, left, and David Granger — wearing garlands of flowers — are greeted by supporters and local media executive, Tony McWatt, right. Photo by John O’Dell, who also sang a rendition of Frank Sinatra’s “My Way” and the National Anthems of Canada and Guyana. The other gentleman was the “Long Man”.

TORONTO, Ontario – Riding the crest of a wave of almost euphoric expectancy of an election victory in the country’s upcoming election on May 11, the presidential and prime ministerial candidates for Guyana’s leading opposition coalition – A Partnership for National Unity and the Alliance for Change (APNU+AFC) David Granger and Moses Nagamootoo, promised over 500 adoring supporters, to create a country, to which they would feel safe returning — to visit or live.

Speaking first, Nagamootoo, a lawyer and a political veteran, took a shot at assuaging the fear of crime and violence that many Guyanese expatriates have expressed, as the primary reason for their reluctance to return to their homeland.

“You are here, hoping and dreaming and expecting that you’ll return to Dear Guyana, but you have been afraid to do so,” he reasoned. “In as much as you wanted and longed for that day, I stand here as prime ministerial candidate for elections on May 11 — an election that we know will be won by this coalition — to assure you, that we will make Guyana safe for your return.”

“And, we can take care of problems back home, with a team that has been well put together — a team of broad-based experienced and knowledgeable people, with a plan, with a program, with a vision, that can bring about both healing and development in Guyana,” he added.

Then, billed as the main attraction by Nagamootoo, the presidential candidate briskly stepped up to the podium, echoing the sentiments of what appeared to be the political talking points, targeted to this audience of Guyanese migrants.

“We don’t have all the answers,” Granger admitted, “but we’d like to assure you, that Guyana could be a destination that you would want to return to. And we know the biggest problem facing many of you is the problem of security. I am going to help you…and Moses and the other members of the APNU-AFC team, are going to help us to make Guyana a safe place for you.”

Granger and Nagamootoo were in Toronto on Sunday, attempting to persuade local supporters to help fund their election campaign, back home in Guyana, and to bring them up to date on the recent developments in the country.

The fundraising effort took the form of a brunch, held at the Elite Banquet Hall, which was completely sold out and which was populated by a surprisingly racially diverse crowd, made up of approximately 60% African-Guyanese, 39% Indian-Guyanese, and 1% Chinese-Guyanese and Portuguese-Guyanese, inter-mingling harmoniously– emblematic of the last part of the coalition’s slogan, “It’s time for change; it’s time for unity”.

Guyana’s political parties are preparing for what is shaping up to be, exciting and close elections, both national and local government, on May 11.

In an impassioned, extemporaneous speech, tinged occasionally with humour and specifically targeted to the Guyanese expatriate audience, the tall, handsome, charismatic Granger also said, once in government, the coalition would establish a department of the Diaspora “so that we can bring the two sides together.”

“And over the next year, between now, April, 2015, and when we celebrate the 50th anniversary of our independence, on May 26, 2016, we are going to convene, right here in North America, a conference of the Diaspora. We want you to tell us how we can help you; how the two sides can work together,” he added, to thunderous applause.

Earlier, before the two visiting political leaders had arrived, Manny Singh, a local realtor and supporter of Guyana’s governing party, PPP-C, staged a fledgling picket demonstration outside the venue, where the brunch was kept.

Singh, also an official of the Guyana government’s Canadian affiliate, The Association of Concerned Guyanese (ACG), the group which had organized a fundraising dinner at the same venue the week before, for the PPP-C, had sent out an email, on the same Sunday of the APNU-AFC brunch at 1:27AM, to “newspaper editors, journalists and friends” saying, “This is to inform you that I will be leading a peaceful picketing demonstration against the PNC (APNU)-AFC Meeting at Elite Banquet Hall – Toronto.”

In response to the email, only six protestors were seen at the venue, three, including Singh, at the eastern parking lot entrance and three at the southern entrance.

Although the protest was mainly peaceful, the three picketers at the southern entrance were seen taunting drivers as they attempted to get into the lot.

A source inside the brunch’s organizing committee, informed Pride News Magazine that they had gotten wind of the impending protest, and in an attempt to forestall violence or disruption, had hired private security to man the front entrance to the banquet hall and called the Toronto Police Service, which sent over a police cruiser and two police officers to bar the protestors from invading the premises.

At one point, the two police approached Singh and two of his protestors, advising them not to break the perimeter of exclusion.

Although the mini-protest appeared to have fizzled and not achieved its desired effect, which, according to Singh, was to get Granger to answer damning questions and allegations about his time as commander of the Guyana Defence Force — which he (Granger) didn’t, he (Singh) said, in an email sent to Pride News Magazine, “I was very pleased with my efforts and those of my few comrades, who joined me yesterday (Sunday) to stage the picketing demonstration against the PNC-AFC leaders and their event in Toronto.”

Singh, who was adamant that the demonstration was his idea only, and not that of the PPP-C, insists his protest was successful: “I feel our protest-demonstration was very successful, and we have achieved our goal, in bringing awareness to the very questionable and controversial record of Mr. Granger, when he was in charge of the GDF Army, during the PNC dictatorship. And, Mr. Nagamootoo, for all his lies and dishonesty that he peddles in his political life.”

Nagamootoo — who, along with Granger, had received a reception that resembled more of a love-in for a Hollywood celebrity, including being draped with garlands of brightly coloured flowers (leis), and accompanied by a masquerader on stilts, called a “long man” in Guyana, waving both the country’s and the coalition’s flags; and was almost mobbed upon their arrival inside the banquet hall — gave an uncharacteristically short speech, which was shorter than the one given to introduce him.

Commenting on the protestors, he said: “All around the world, the opposition would normally picket against the government, and you saw today, what reminded me of the film, starring Yul Bryner, ‘The Dirty Dozen’, was outside picketing — the government picketing the opposition. It’s a sign of the times, that change is coming and that the roles have now been changed.”

Although the candidates’ speeches contained mainly platitudes and lacked specific plans of action and a substantive election policy platform, the swooning audience didn’t seem to care, caught up as they were in the emotional tsunami of the “It’s time for change” mantra.

And Nagamootoo obliged: “Back home, we are fighting an uneven battle with a government that is totally corrupt and is using the state’s resources to promote its campaign. But we have been rewarded with the blessings of the Guyanese people, and we have seen a new energy in Guyana that supports a change of government at the election on May 11.”

Throughout the entire brunch the two candidates were besieged by supporters, requesting autographs and to have photographs taken with them, and, what was almost palpable, was an ambiance of celebration, unabated anticipation of impending change, and the audience-sampled sentiment that the APNU-AFC coalition was headed for victory on election day.