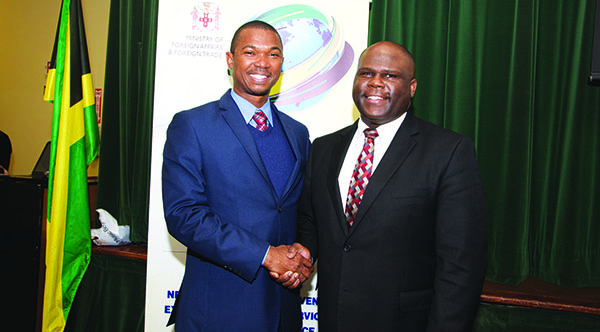 Photo above is of Minister Arnaldo Brown, left, and Jerrold Johnson. Photo by Eddie Grant.

TORONTO, Ontario – Arnaldo Brown, Minister of State, Ministry of Foreign Affairs and Foreign Trade, is urging the Jamaican diaspora in Canada to participate in the country’s development.

He was in Toronto for the official launch of the 6th Biennial Jamaica Diaspora Conference, happening in Montego Bay, June 13-18 under the theme, “Jamaica and the Diaspora: Linking for Growth and Prosperity.”

Speaking at the Jamaican Canadian Centre on April 13, Brown said if Jamaicans have any doubt about the cultural relevance of Jamaica, he thinks that, “it is time that we disabuse ourselves of this doubt.”

He reminded those in attendance that Jamaica’s contribution in the world is significant.

The minister with responsibility for diaspora affairs said it is time that Jamaica comes into its own.

“My message is simple, coming into our own requires Jamaicans at home and Jamaicans abroad to work together. That is what it means and that is why the conference is critically important because it allows us to sit down to dialogue as a family and to say how can we make and continue to make Jamaica great, because Jamaica is great.”

He noted that Vision 2030, Jamaica’s national development plan, is something that everybody buys into and that the government does not conceive of development happening in the country without the participation of Jamaicans everywhere.

“I believe very firmly that Jamaicans working with Jamaicans in Jamaica can help us to realize Vision 2030 in quick time.”

“The reality is that the people who need to be bullish about Jamaica are Jamaicans and it is time we recognize the value that we have, the value that the world places on us, the leadership that the world look to Jamaica for because again it is not by accident that he came to Jamaica. He came there because the United States needed to demonstrate to the region that they have a vested interest in the region and they did that by coming to Jamaica,” he said.

Lloyd Wilks, Jamaica’s consul general at Toronto, said it was significant that the conference starts with two days of worship and that there is a discussion on the role of the church in diaspora development and engagement because many Jamaicans attend churches regularly in the diaspora.

He also introduced the newly formed Jamaican Canadian Youth Council (JCYC), which he said, is following on the heels of Futures Leaders and will serve with them.

“We need to ensure that our neighbours, our friends, our children are engaged because without our engagement in our own business, somebody else goin’ run it,” he said.

The Jamaican Diaspora in Canada has also consistently and significantly contributed to Jamaica’s health sector and investment interests through the years. Last year, the Jamaican Diaspora and Friends Health Forum was held at the Sunnybrook Health Sciences Centre in Toronto.

“Jamaica continues to improve as an attractive business destination,” said Scully, noting that Jamaica has been rated by Forbes magazine as the #1 place to do business in the Caribbean and #43 in Latin America.

He said the conference has been transformed into one that will more speak to investment and trade opportunities.

“It’s a part of our commitment to really foster the growth in Jamaica and to bring partnerships with people like you from the diaspora who have significant contributions to bring to the development of Jamaica,” said Johnson.

This year, the conference will expand the Market Place, showcasing local and overseas exhibitors and the legacy sponsors, who have been private sector partners with the foreign ministry and other government departments and agencies, since its inception in 2004.

A highly anticipated addition to the conference is the special symposium on immigration and deportation, slated for June 17, in light of the draft migration and development policy.

Wade said the objective of the council is to promote the betterment of Jamaican youth within the diaspora and to work with marginalized communities.

Its priority is to establish a strong network of corporate and social partnerships within the Jamaican diaspora. Wilkinson said the group hopes to participate in the diaspora conference in June and intends to be one of action and not just talk.

The opening prayer was by Rev. Dr. Audley Shaw, Revivaltime Tabernacle, national anthems by Allan Jones and Tika Pinnock, president of Wolmers Alumni Association – Toronto was the master of ceremonies.

Other launches took place in Edmonton, Ottawa and Montreal.