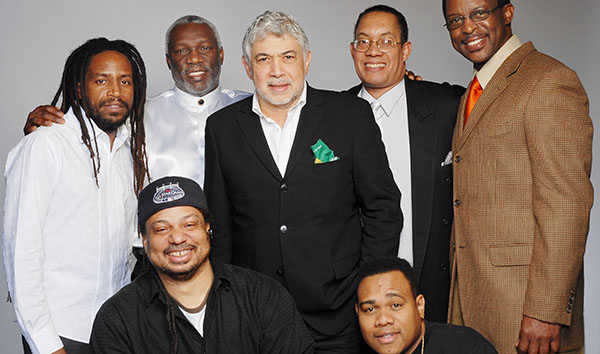 Photo above is of Monty Alexander, centre, and his Harlem-Kingston Express band.

In a career spanning over 50 years, Jamaica-born, internationally renowned jazz pianist/composer, Monty Alexander — born Montgomery Bernard Alexander — has built a reputation exploring and bridging the worlds of American jazz, popular song, and the music of his native Jamaica, finding in each a sincere spirit of musical expression.

Reggae has been such a popular music for so long, it’s surprising that more jazz musicians haven’t recognized its potential as a vehicle for improvisation, a journalist once noted.

“Bridging reggae and jazz without losing the sound of either is a delicate balance. It generally means maintaining the heavy off-beat accents and syncopated bass-lines that hew toward ska without reining in the challenging harmonic substitutions of bebop. Pianist Monty Alexander has made a career of this endeavor….,” wrote Levy.

He “deftly interweaves the island grooves of his Jamaican heritage with a straight-ahead jazz backdrop. Hence Alexander’s percussive rhythmic sensibility, contrasting that Maytals’ one-drop effect with his left hand and dissonant riffs with his right, and his predilection for sweeping lines, inspired at once, by Wailers’ riddims and former collaborator, Milt Jackson’s, fluid exploration of the high and low range,” adds Levy.

For an article in Utah’s Deseret News, Jeff Metcalf, an English professor at the University of Utah and an avid jazz fan, interviewed Alexander, by phone, prior to his opening performance at the state’s Jazz SLC festival, last September.

In the entertainment piece, Alexander explains why, and how, he came up with the new sound and its significance to him personally.

“Although most of my professional life has been spent playing traditional jazz piano, I realized I needed to examine my own cultural heritage,” Alexander told Metcalf.

“It was important for me to explore the deep roots of Jamaican reggae and see if I could integrate it into jazz. Both forms of this music are important to me, so I threw together a combo to unleash who I am. In a sense, I gave myself permission to allow me to be me.”

Born on June 6, 1944 — D-Day — and raised in Kingston, Jamaica, Alexander took his first piano lessons at age six, although he is largely self-taught; and, as a teenager, he witnessed concerts by Louis Armstrong and Nat “King” Cole at Kingston’s Carib Theater. These artists had a profound effect on Alexander’s aspirations.

He formed Monty and the Cyclones in the late 1950s and also recorded on sessions with the musicians who would catapult Jamaican music to international recognition as The Skatalites, the first band that backed Bob Marley.

Alexander and his family came to the United States at the end of 1961 and, less than two years later, while playing in Las Vegas with Art Mooney’s orchestra, he caught the eye of New York City club owner, Jilly Rizzo, and his friend, Frank Sinatra.

Rizzo hired the young pianist to work in his club, Jilly’s, where he accompanied Sinatra and others, and where he met Modern Jazz Quartet vibraphonist, Milt Jackson, who hired him and eventually introduced him to former Charlie Parker collaborator and legendary bassist, Ray Brown.

Alexander recorded and performed with the two jazz giants on many occasions, leading to Jazz’s greatest luminaries welcoming Alexander to their “musical fraternity” in the mid-1960s. Among these earliest enthusiasts for his playing were, none other than Duke Ellington, Count Basie, and Miles Davis.

His projects have been as varied as assisting Natalie Cole in her tribute album to her father, Nat “King” Cole in 1991 (the resulting album, “Unforgettable”, won seven Grammy awards); performing George Gershwin’s “Rhapsody in Blue” under the direction of Bobby McFerrin at the Verbier Festival in Switzerland; and recording the piano track for the film score of Clint Eastwood’s “Bird”, a movie about the life of jazz titan, Charlie Parker.

“I was so fortunate as a young musician. I never formally studied music, but I was blessed to have met some of the biggest names in the industry, and I learned so much from them,” Alexander said in the Metcalf interview.

“I met Louis Armstrong, Nat Cole and Duke Ellington. I was just a kid and they always treated me with respect. I paid attention to them as artists and couldn’t help being influenced by all of them,” he elaborated.

To date, Alexander, who, in August 2000, the Jamaican government awarded with the title of Commander in the Order of Distinction for outstanding services to Jamaica as a worldwide music ambassador, has recorded over 70 albums as a band leader.

Listed in Hal Leonard’s 2005 book, “The Fifty Greatest Jazz Piano Players of All Time”, as among the top five Jazz pianists of all time, Alexander, who also plays the melodica, maintains a rigorous touring schedule worldwide, playing in jazz clubs, concert halls and at international Jazz Festivals in the USA and across continents, from Europe to Asia; in Montreux, Switzerland; Johannesburg and Cape Town, South Africa; and Japan, Russia, New Zealand, Australia.

In the late summer of 2005, Alexander traveled to Bob Marley’s Tuff Gong Studio in Kingston, Jamaica, and teamed up with Jamaican top session players to record Concrete Jungle, a set of 12 compositions, penned by Bob Marley, and reinterpreted with Alexander’s jazz piano-oriented arrangements.

The resulting union of musical perspectives digs deep into the Marley legend and brings together the two worlds that Alexander most treasures, and building the musical bridges that are the very essence of his craft.

As a testament to his versatility, The Good Life, on Chesky Records is a collection of songs written and popularized by one of his all-time favorite artists and good friends, Tony Bennett. His second release on Chesky, Calypso Blues, is tribute to another one of his heroes, Nat “King” Cole.

In 2008, with the invitation of Wynton Marsalis, Alexander conceived and directed the acclaimed program, Lords of the West Indies at Jazz, at the Lincoln Center, broadcast nationally on Black Entertainment Television (BET).

In the winter of 2008, American singer and icon, Tony Bennett, personally invited Alexander to record as the featured pianist on his Christmas album, A Swinging Christmas, with the Count Basie Orchestra. Alexander can be spotted on the album cover, holding a turkey, next to Bennett.

Alexander returned to Jazz at Lincoln Center in 2009 with a new band and program, Harlem-Kingston Express, in which he merged classic Jazz with rhythms and vibrations of his native Jamaica.

Two collections were released in 2011 that capture the excitement of Alexander’s live performances around the world: Uplift, a trio album on JLP Records, and Harlem-Kingston Express: Live on Motema Music.

In the summer of 2012 Alexander was awarded the prestigious German Jazz Trophy, “A Life for Jazz” and in November 2012, he received the Caribbean American Heritage Luminary Award from the Institute of Caribbean Studies in Washington, D.C.

In Alexander’s band’s second release, “Harlem-Kingston Express, Vol. 2: River Rolls On,” he continues to investigate the musicality of this jazz-reggae marriage, wrote professor Metcalf in the Deseret News.

“What I love about this is that even when we’re deep into the Jamaican, I can change at the drop of a hat and bring it back to jazz,” Alexander said.

“I was just in France and a man came up to talk with me after the concert. He’d been a fan since I started playing in Europe so many years ago. He just wanted to tell me how much the music meant to him. But the coolest thing was that he’d also brought his son with him and his grandson. Three generations of jazz lovers. It’s at times like that that I can’t believe I get paid for what I do,” he concluded.

On Saturday, April 25, as part of Toronto’s Royal Conservatory of Music’s 2014-2015 season, featuring the Special Music of the Americas concert series — Soul/Funk/R&B and Jazz” — Alexander and his band, Harlem-Kingston Express, will serve up his unique blend of musical genius.

What can the audience expect?

And Downbeat Magazine reviewed a recent performance: “Monty Alexander presented his refined concept of groove with the recent Harlem-Kingston Express project, blending a jazz trio and a steaming reggae unit, weaving back and forth between the idioms with orchestral finesse.”

But, possibly the best detailed, imagination-grabbing account of Alexander and his band in performance mode, belongs to David Rickert, who wrote a review in ALL ABOUT JAZZ — website, self-described as “The most comprehensive jazz resource on earth” — on July 23 in 2011.

“The Harlem-Kingston Express (evoking not only the combination of the two cities but also the high-powered excitement the band brings to the stage) is essentially two groups in one: a jazz group and a reggae group, with Alexander straddling the two on piano. Each plays more or less purely in their own genre, but with Alexander the common thread that holds them together,” Ricketts revealed.

“The end result is a set of deeply groovy tunes that work so well together that it would be pointless to determine out what’s jazz and what’s reggae.”

And Rickert, obviously a fan, added, “The straight-ahead jazz numbers swing like mad, and the reggae group has the deeply rhythmic groove of percussion and bass that the music requires—no disappointment on either front.”

Alexander and the Harlem-Kingston Express’s Toronto performance will be held in the Koerner Hall theatre, at 273 Bloor Street, West, and will start at 8:00PM, with tickets costing from only $35.00.