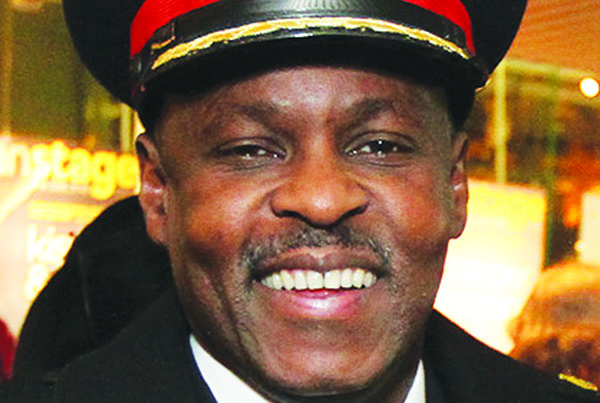 TORONTO, Ontario – The next chief of the Toronto Police Service, Deputy Chief Mark Saunders — the city’s first Black police chief — says he is willing to meet with groups that have issues concerning carding.

But while some of those groups are willing to meet, they think the time for dialogue has long passed, as there have been hundreds of deputations and many hours spent explaining why carding is a problem.

“While we welcome the opportunity to work with and dialogue with him, what’s needed now is concrete action, positive action, concrete change to eliminate carding or meaningfully reform it,” says Anthony Morgan of the African Canadian Legal Clinic, noting that nothing that the ACLC has to say will be new or different from anything Saunders has heard at the countless police services board meetings that the chief designate has attended.

Saunders, 52, will assume office after Chief Bill Blair completes his 10-year tenure on April 25. The appointment comes a few days after the Toronto Police Services Board approved a policy on carding, known also as “community engagement”, that many civil and human rights groups oppose.

“You have been in attendance at the board meetings over the past two years and have heard the various deputations on racial profiling and carding which are violations of the Charter of Rights and Freedoms. Our position has not changed and we will hold you to the ideals and standards that we expect of our police,” says Kingsley Gilliam of the Black Action Defense Committee (BADC) about Saunders’ appointment.

As the chief designate, Saunders says, in the coming weeks, he will lay out a full-scale road map of what he would like the Toronto Police Service to achieve.

The chief designate is looking forward to a strong working relationship with the board and to meaningful discussions that “will move us forward in keeping the city the safest and best place to be.”

“I also want to thank the many community supporters who openly offered their support during this process. There were some community members who were fair in saying they wanted to support me but they didn’t know me. I look forward to getting to know you and having discussions that will earn your support. There were also many supporters within the service who gave me the strength to push through this process,” he said, noting that Toronto is the greatest city in the world with over 140 different cultures and where people live peacefully with each other – “a testament of what great citizens we have.”

“They deserve the best police service in the world; a police service that is bias free and whose members treat everybody with respect and dignity. You have my promise that I will do everything in my power to provide just that. Community relationships will determine the success or failure of our service. I do not take this lightly, the ability for us to work collaboratively is crucial and I want you to know that I recognize this point very clearly,” he said. 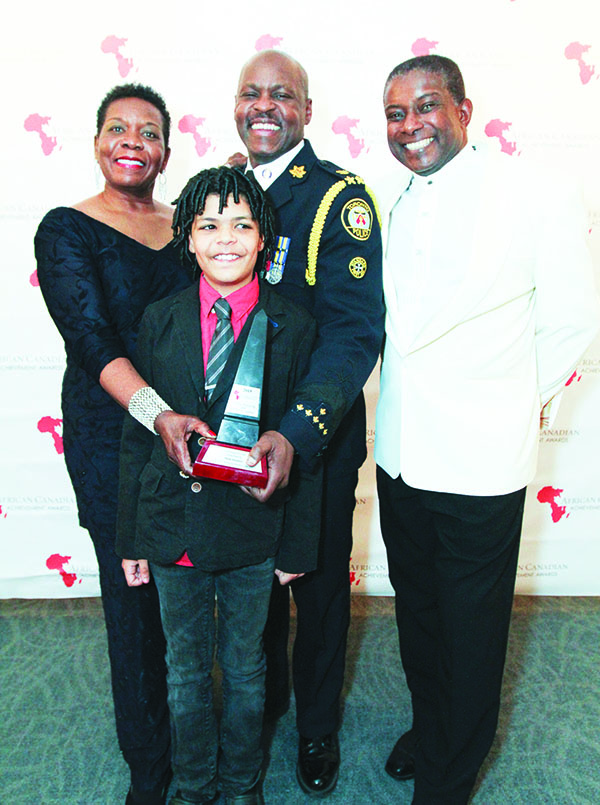 Saunders, who is in charge of the Specialized Operations Command, and Deputy Chief Peter Sloly — both of Jamaican heritage – were shortlisted for the position with many in the African Canadian community giving Sloly the nod over Saunders. Another deputy chief, Mike Federico, also applied for the position.

He said the consultation process combined with the board’s own priorities, as well as an understanding of the challenges of the future, led to a global search for the next leader of the police service.

“Two words ‘leader’ and ‘change’ captured the essential requirements of the job. The board’s objective was to identify an inspired and credible leader, who would work with, and be accountable to, the board to ensure that policing is anchored in community partnerships characterized by mutual trust.

“We sought a leader who would strive to stimulate within the service openness to new ideas and innovative thinking and who would foster a spirit of cooperation and teamwork among all members of the service, both uniformed and civilian,” he said.

The board chose Saunders, who was born in England of Jamaican parentage, after final interviews, last Friday.

“The Board is confident that in Mark Saunders it has found the advocate of effective, equitable policing, the recognized police leader and the creative problem solver that it was seeking. In him, Toronto will find a police chief who is a good listener, who is always willing to sit down for the collaborative search for solutions, who is transparent, who likes a good argument but is willing to be convinced by facts and evidence, who is down to earth and who genuinely cares,” Mukherjee said.

He said that there is much work to be done to ensure that the service addresses issues of public concern: carding, racial profiling, dealing with people in crisis, the cost of policing, to name a few.

Deputy Chief Saunders is in his 32nd year with the Toronto Police Service and oversees 1,200 police officers and 164 civilian members, with a budget of $175 million. Specialized Operations Command is comprised of specialized investigative and response units. These units support front line officers in the Community Safety Command and work hand in hand with municipal, provincial and federal agencies.

He said that was followed with a second round of interviews with three candidates, followed by detailed reference checking and assessments and finally extensive discussion between and among members of the board.

“As far as I know this is the most thorough selection process ever undertaken for a chief of police and by definition, that also means it was the most thorough not only for the candidates and what they had to go through to get to this day, but also the most thorough for the board, in terms of the discipline it applied to itself in making sure that we did our job.”

“Mark is a great guy. He is a good leader, a smart man, and someone who is very transformational,” says Michael Thompson, Toronto city councillor and a former member of the Toronto Police Services Board involved in appointing him deputy chief in 2012.

Speaking on CBC Radio’s Metro Morning, Thompson said Saunders will have to resolve some of the challenges that exist with the service, such as the budget and the relations between the police and the community, in general.

He said the deputy chief has the competency to lead the organization in its next stage and is also a change agent needed for the police service.

Mike McCormack, president of the Toronto Police Association, said Saunders has strong credibility with police officers, having come up through the ranks.

Earlier this year, during Black History Month, the Black community bestowed upon Saunders, one if its highest honours, the African Canadian Achievement Award of Excellence (ACAA) — in law.

“The appointment of Mark Saunders as Police Chief is historical and I would like to offer my congratulations to him. This is someone who has come up through the rank-and-file of policing and understands what it is to be a police officer and now,  the Chief,” she said.

Lawrence, who personally presented the award to Saunders, added: “I am confident that Chief-elect Saunders will, no doubt, inspire others, especially our young people.  It is my hope that he will foster understanding and respect between the police  and all people living in Toronto and beyond.”

Morgan described the appointment of Saunders as historic but a bittersweet moment for the community.

“We support anytime there is a recognition of our qualified, talented individuals who are appropriately regarded and then put in positions of power in our city. We see it as a strong sign to organizations across the board, across Toronto, across Canada, that where you have talent, where you have qualified individuals who are Black, merit can have a Black face; so we support that wholeheartedly.

“However we also find it a bittersweet moment, because in terms of the kind of stance on the issue of carding, racial profiling or even community trust between community and policing, we don’t see that Mr. Mark Saunders is the one who is going to champion that. He has not demonstrated that he is the most progressive on the issues,” said the policy and research lawyer at the ACLC.

Morgan says the ACLC looks forward to the opportunity to work with Saunders, to understand his positions more, but also to work towards having him realize that carding, as a practice, has no place in modern policing.

He said if it is going to be undertaken, it has to be in a way that is much more consistent with the Ontario Human Rights Code and the Canadian Charter of Rights.

Meanwhile, the Black Action Defense Committee (BADC) is looking forward to taking up Saunders’ invitation to meet face-to-face to discuss its concerns.

“The Black Action Defense Committee is very proud of your achievement, bearing in mind that one of the earliest issues that BADC advocated for, was the promotion of qualified and experienced Black officers through the ranks,” the human rights activist organization said, in a statement.

BADC said Saunders will have the opportunity to become the transformative figure that the Toronto Police Service requires, if it is to regain the respect, trust, and confidence of the over-policed community and the citizenry of Toronto.

“The policy that Chief Blair developed and the board voted to approve, is nothing more than a set of lofty principles that every police officer has already sworn to uphold, but many wantonly violate on a daily basis, under the direction of Chief William Blair. These include racial profiling and unlawful stops, arbitrary detention, interrogation, and denial of people’s Charter Rights,” the statement said.

Throughout his career, Saunders has had an extensive investigative background within the portfolios of: Professional Standards, Urban Street Gang Unit, Intelligence Division, Drug Squad, Community Safety Command, Emergency Task Force and served as the Unit Commander of the largest Homicide Squad in Canada.

The chief designate is the Toronto Police Service’s executive sponsor of the Toronto Pan Am/Parapan American Games, recognized as the third largest in the world after the Olympics and the Commonwealth Games. His responsibilities entail both safety and security of the athletes, spectators, venues and the citizens of Toronto, during the hosting of the 2015 Games.

Recognizing current trends in technology, the deputy chief created an investigative cybercrime Unit called “C3”. This investigative unit is housed within Specialized Operations Command – Detective Operations and was developed in order to maximize the use of technology in policing. Combatting these current trends and issues has been recognized by Saunders as a way to improve the type of policing vehicle used to, not only solve and prevent cybercrimes, but to foster and improve communication with all communities that he serves.

Deputy Chief Saunders holds a Bachelor of Arts degree in justice studies from Guelph Humber University. He was selected as a Canadian representative from Canadian Associations of Chiefs of Police to participate and completed the Leadership in Counter Terrorism Course (LinCT), which included studies in Scotland and Ireland, specializing in counter-terrorism with the supporting themes of leadership and intelligence.

He lives in Toronto with his family and is an accomplished photographer who oftentimes donates his work to charitable organizations.