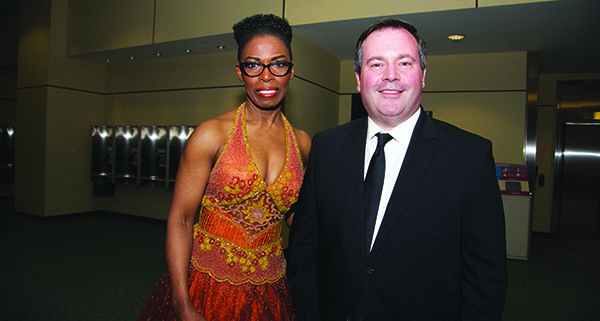 Photo above is of Pauline Christian and Defence Minister Jason Kenny at the HJA gala. Photo by Eddie Grant.

With a federal election in the offing later this year, on Monday, October 19, Kenney revealed the government’s plan, during a speech at the 33rd. annual Harry Jerome Awards’ (HJA) $200-a-ticket gala, last Saturday evening, at the Metro Convention Centre, in downtown Toronto.

The HJA, which is organized annually by the Black Business and Professional Association (BBPA) and recognizes excellence in Canada’s African-Canadian community, bestowed its much-sought-after honour on 15 deserving recipients, this year.

“Friends, I am pleased to announce tonight, just as you are going to be celebrating role models on this stage that, as Minister of National Defense, I think it’s about time that we had a Black Canadian war hero as a role model, and so I am announcing that, the government of Canada will be naming one of our new arctic offshore patrol ships Her Majesty’s Canadian Service HMCS William Hall VC, the first Canadian naval vessel ever named after a Black man,” Kenney told the delighted audience that greeted his announcement with robust applause.

“And when we get that ship, in a couple of years, and commission it in the port of Halifax,” he added. “I hope that some of you can join us for that historic day.”

Leading up to his announcement, Kenny, who has represented the riding of Calgary Southeast in the Canadian House of Commons since 1997, piqued the interest of the mainly African Canadian audience, saying, “The first Canadian to win the Victoria Cross was also the first Black man to win the Victoria Cross, the highest military honour in Canada and the British Commonwealth, awarded for extraordinary valour, heroism and bravery.”

“His name was William Hall,” he continued, “the son of American slaves, who escaped during the war of 1812, came north, like so many others, following the North Star to Canada, the new land of freedom.

“And to repay this country for his freedom, he served in the Royal Navy, and in 1859, he was awarded the Victoria Cross for extraordinary valour.”

Kenney’s statement though, about Hall being the first Canadian to win the Victoria Cross (VC) medal is disputed by Canada’s Veteran Affairs Ministry that lists Lt. Alexander Dunn (Charge of the Light Brigade) as receiving it in February, 1857.

The VC medal was instituted on February 5, 1856 with awards retroactive to 1854.

Hall, who was the first Black-Canadian and first Nova Scotian to be honoured with the VC medal, received it “for his actions in the Siege of Lucknow during the Indian Rebellion. Hall and an officer from his ship continued to load and fire a 24-pounder gun at the walls after the rest of the party had been killed or injured by the defenders”.

William Neilson Edward Hall, was born in Horton’s Bluff, Nova Scotia, on April 28, 1827, to Jacob and Lucy Hall, former slaves who fled the US and landed in Halifax as refugees of the War of 1812. The Halls eventually moved to Horton Bluff, on the Minas Basin in Nova Scotia, where William and six other children were born.

Like many Nova Scotians, growing up in the age of sail, William chose to go to sea. He was only 15 years old when he joined the crew of a merchant ship. He served for three years in the American Navy and in 1852 joined the British Navy as an able seaman.

Hall served in the Royal Navy until 1876, when he retired to live with two sisters in a small farmhouse near Hantsport, Nova Scotia. He died of paralysis in Hantsport on August 25, 1904, and was buried in an unmarked grave in Lockhart, without military honours.

In 1937, a campaign was launched to have Hall recognized by the Royal Canadian Legion, and it was not until 1954 that his remains were reinterred in the grounds of the Hantsport Baptist Church.

A cairn was erected in his honour two years later by the Hantsport Branch of the Legion, which includes an enlarged bronze replica of his Victoria Cross and a plaque describing his actions and devotion to duty.

In 1967, Hall’s medals were returned to Canada from England to be shown at Expo ’67, in Montreal. For a number of years, his Victoria Cross and other medals were lent to the Canadian War Museum in Ottawa.

In February 2010 Canada Post released a stamp to celebrate the remarkable story of Hall. Today, his medals are on display at the Nova Scotia Museum in Halifax.

Just as it appeared that Kenney was wrapping up his speech, he seemed to remember something else he wanted to impart to the audience of an estimated 1000, including the then Toronto police chief, William Blair, and the newly appointed one, chief-designate, Mark Saunders.

Acknowledging that the audience included CARICOM consul-generals, honourary consul-generals and successful business leaders of Caribbean heritage, Kenney, obviously sensing an opportunity to capitalize on this fact, strayed into the purview of the international trade ministry, by pitching them to use their influence and contacts, back home, to help restart the Canada-CARICOM free trade negotiations, which stalled last June.

“You know, our government has been trying, for several years, to pursue free trade negotiations with the CARICOM countries and, it hasn’t gotten very far — we take two steps forward, one step back, and we haven’t had enough forward-leaning political will within the Caribbean countries to pursue this with vigour,” he said.

“Canada has signed trade agreements with 45 countries in the last eight years, and we want to get this done. We want you, the business leaders of the Caribbean-Canadian business community, to help build broader bridges of prosperity between Canada and the island nations of the Caribbean. We think free trade is one way of doing that,” added Kenney, who also holds the portfolio of Minister of Multiculturalism.

“So, I just want to pitch to you, those of you who have connections back in the Caribbean countries, please call on those connections to reboot, to re-energize our free trade negotiations with the CARICOM countries. We want to make that happen. We want to open those doors of prosperity, and thank you for your help on that.”

The Trinidad & Tobago Manufacturers Association (TTMA) in a statement — entitled CARICOM-Canada Trade and Development Agreement — on its website noted that, “In June 2014, based on the apparent inability to conclude the negotiations, Canada had proposed that negotiations for an Agreement in Principle (AIP) be concluded (as opposed to the actual Agreement). The text of this agreement was submitted by Canada to CARICOM for comments (and preferably approval). Thus, Canada is currently awaiting a response from CARICOM. As at 31 December 2014, CARICOM had not re-engaged its North American trading partner.

“Nevertheless, there has been communication between CARICOM and Canada after the June deadline elapsed. The Prime Minister of Jamaica on behalf of CARICOM, liaised with her counterpart, the Prime Minister of Canada (Stephen Harper) on charting a course forward for negotiations. Based on that liaison, CARICOM felt confident that there is still an opportunity for it to submit a response to the AIP.”

The statement continued, “The issue was raised at the 39th meeting of the Council of Trade and Economic Development. During the meeting, the Secretary General of CARICOM, Ambassador Irwin LaRocque strongly urged the leaders present to give the conclusion of this agreement a high level of priority.

“Ambassador LaRocque then mandated that a meeting of the technocrats should be convened, with the aim to solidify CARICOM’s position, while accounting for the differing national positions (the importance of this process cannot be underrated, since decisions of CARICOM are based on a consensus-basis). Consultations at the regional level were held in November and December, so that a position can be communicated to Canada as soon as possible.

“In December 2014, after much deliberation among members of the regional grouping, CARICOM provided to the Government of Canada a revised offer. This submission was made based on Canada’s apparent willingness to still accept proposals from CARICOM.”

“In January 2015, the CARICOM Technical Working Group (TWG) on Market Access and Agriculture, met again to discuss the list of goods that Canada is seeking duty-free access into CARICOM, and by the end of the second day, CARICOM had agreed to liberalise approximately 375 of the 407 tariff lines in which represents in excess of 92% of the tariff lines,” said the TTMA statement.

A meeting of senior CARICOM trade officials is to be convened soon, to come up with a revised offer that could be forwarded to Canadian trade officials.