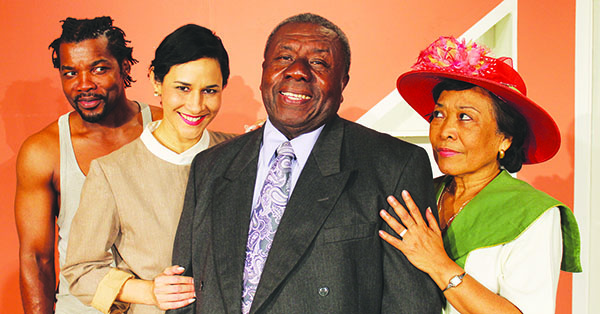 Since almost 25 years ago, and, in spite of a 40-year-old friendship, the Caribbean’s “King of Comedy”, Oliver Samuels, and award-winning playwright, Basil Dawkins, have not worked together on a play — until now. 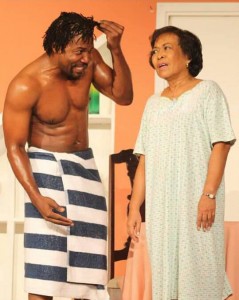 Grace (Ruth Ho Shing) the wife of Augustus, can’t seem to understand what her “sweet man”, Wayne, played by a buffed-up Dennis Titus, is trying to tell her about his hair. Photo courtesy of Basil Dawkins.

In 1986, Samuels was an actor in Dawkins’ “Champagne and Sky Juice” in London, England and, in Toronto, on May 8, 9 and 10, the two theatre heavy-hitters will collaborate on a new comedy/drama play, “Divorce Papers”, in which Samuels reverts back, exclusively, to one of his favourite endeavours, acting.

The new theatrical production, which opened in Jamaica, last December, is being brought to Toronto by producer, Carol Japp, and her production company, Ebony Nile Ventures, as the fare of its 15th. Annual Mother’s Day event.

“It’s God who decided that now is a good time to collaborate,” Samuels told Susumba.com, a Caribbean arts and culture magazine, in an interview, last December in Jamaica, further explaining that a key element of their reunification is that their goals are aligned.

“I am currently deciding where I want to take my career, Basil is looking towards new markets,” Samuels added. “I need to be challenged by the material I am working with, without losing the integrity of who Oliver, as a performer, is. Basil Dawkins, through his excellent writing, is offering me this with ‘Divorce Papers’, so it is the right time to collaborate.”

For the past few years, Samuels said in the interview, he has been writing, producing and directing his own plays, and now he has a chance to return to his true passion, being on stage, and promises that audiences will not be disappointed.

Celebrating over 30 years in theatre as actor, producer and multi-award-winning playwright, Dawkins has scripted 24 successful plays, his latest offering being “Divorce Papers”, which follows a long tradition of issue-oriented plays, rooted in the Jamaican experience, and which theatre-goers, all over the world, continue to find relevant, current, engaging and entertaining. 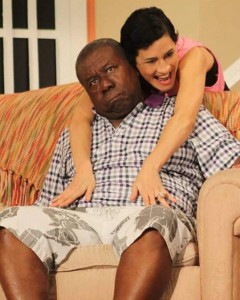 Augustus, played by Oliver Samuels, being cuddled by his “other woman” Stacey, played by Maylynne Walton Lowe. Photo courtesy of Basil Dawkins.

In the Toronto incarnation of the play, Samuels leads a cast of experienced, accomplished actors: Ruth Ho Shing, one of the longest serving thespians still active on the Jamaican stage, copped the 2001 Best Actress in a Lead Role Actor Boy Award for Against His Will; Dennis Titus, who has over 20 years experience in the theatre and film industry, worked alongside Denzel Washington in The Mighty Quinn; and Maylynne Walton Lowe, who has been involved in stage and television for the past 15 years, appearing in Jamaica’s longest running television soap Royal Palm Estate and 4 local feature films, was also the recipient of the 2010 Best Actress in a Lead Role for White Witch of Rosehall.

After cohabiting as man and wife for over three decades, Augustus (Samuels) and Grace Goffe (Ho Shing), an aging upper-middle-class couple, can hardly stand to be in the same room with each other, let alone share a civilized conversation.

The opening scene depicts Augustus laying the divorce papers on the living room table. Accusations of infidelity fly left, right and centre, and between Augustus’ belligerent temper and Grace’s pent-up bitterness over his fling with the maid, their house is no longer a home.

Small wonder that Grace finds solace in the arms of her youthful bodybuilding lover-boy Wayne (Titus), whom she supports financially, while Augustus strikes up a frisky romance with his attorney’s gorgeous assistant Stacey (Maylynne Walton Lowe), who offers him a listening ear and a shoulder to cry on.

But is Stacey secretly expecting a big favour in return? Is Wayne a straight-shooter, who genuinely cares for Grace, or just an opportunist looking out for himself? Can Augustus and Grace find common ground amid the chaos to rekindle the passion on which they built their matrimonial home?

On Mother’s Day weekend, Toronto audiences will get three opportunities to find out.

On Friday, May 8, “Divorce Papers” will premiere at the Chinguacousy Secondary School, 1370 Williams parkway, East, in Brampton, starting at 8PM; on Saturday, May 9 and Sunday, May 10 at the Metropolitan Centre, 3840 Finch Avenue, East, in Toronto, starting at 8PM.

The set design and construction for “Divorce Papers” is being handled by Patrick Russell, who will also execute the lighting and sound for the production, which is being stage-managed by Veronique Smith. And, it is being directed by Douglas Prout, arguably one of the most in-demand directors in Jamaica’s busy theatre circuit.

“This play is not only for persons who are divorced or who are contemplating divorce, but for all persons interested in romantic relationships,” says playwright Dawkins on his FaceBook page.