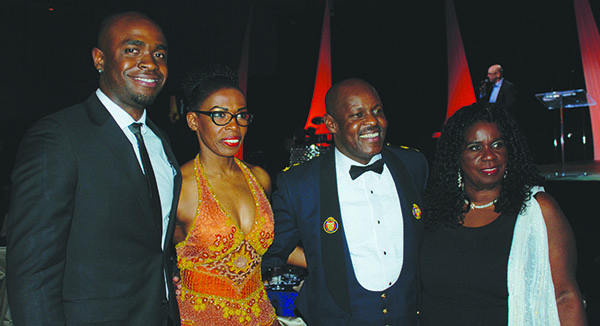 After introducing himself, he was overheard saying to Pauline Christian, the President of the Black Business and Professional Association (BBPA) the organization that organizes the HJA, “I’m going to need your help.”

Saunders was treated like a rock star at the event, with community members seeking him out to congratulate him and request photos with him. He appeared rather comfortable relating to the many well-wishers — and fans? — who approached him, throughout the evening.

Today (Wednesday) at about 2:30PM, he is expected to be addressing community members at the second annual African Canadian Summit, which is organized by the African Canadian Legal Clinic, Midaynta Community Services, the Coalition of Black Trade Unionists, the Ontario Federation of Labour and the Canadian Labour Congress.

This will be the first time that Saunders will address the Black community in his capacity as the Chief of the Toronto Police Service (TPS). Chief Saunders is expected to speak about pressing issues in policing, including carding, racial profiling, police use of force, disclosure of non-conviction records and anti-Black hate crimes.

And Saunders has accepted an invitation from John O’Dell, the co-Chair of the Black Community Police Consultative Committee (BCPCC) to attend the Guyana Ex-police Association of Canada’s (GEPAC) Annual Ball on Saturday, May 3. O’Dell is the Vice-president of GEPAC.

In his first week on the job, as it relates to the Black community-police relations challenge, Chief Saunders certainly seems off to an explosive start.