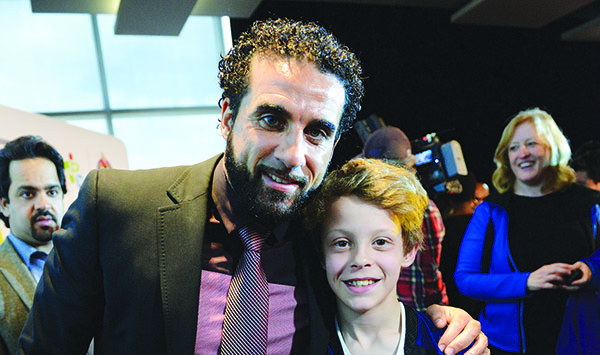 Toronto’s 2015 Pan Am Games Will Reflect Diversity And Inclusion

Photo above is of local soccer star, Dwayne De Rosario, left, and a fan.

TORONTO, Ontario – It might be said that having the Pan Am Games in Toronto is very fitting because it reflects the rich and diverse tapestry of the city –people from all over the world live here. This summer, Toronto will welcome the world to come play sports.

The Pan American Games are  the world’s third largest international multi-sport Games; they are only surpassed in size and scope by the Olympic Summer Games and the Asian Games. More than 7,000 athletes from across the Americas and Caribbean will participate in the Pan Am Games from July 10 to 26  and the Parapan Am Games from  August 7 to 15.

Appealing to many of the diverse communities in Toronto is the goal but succeeding at somehow including all is unrealistic. Yet, the Minister of Tourism, Culture and Sports – Michael Coteau – said Pan Am organizers have formed alliances – and have created programs – which will reflect the varying communities represented during the Games.

“These Games are successful, not only for people involved in sports and athleticism but also, there’s a cultural component to it… we want to make sure that we work with the community, all communities, to get this right,” said Coteau who is the minister responsible for the Pan Am Games in Toronto.

He also expressed that the Games will present “a great opportunity to get out and support your Canadian teams but also to support the teams that are here visiting … Ontario is the best place for these types of international sporting events because we are made up of the diaspora that is represented both through the Pan Am Parapan, Olympics or any other international sport event.”

Coteau, whose father is from Grenada, believes that the approximate 250,000 people from Jamaica in Ontario and the African Canadian diaspora at large will feel a sense of belonging during the Games.

Soccer, as the most popular sport in the world, will surely appeal to many communities in our diverse city. On Friday, April 27, the live draw for the men’s and women’s football (soccer) competition was held at Corus Quay – Corus Entertainment Building.

As for the live draw, it began with an upbeat performance by a Brazilian drumming group while the official Games mascot, Pachi the porcupine, danced to the rhythm of the beat.

The co-host for the tournament draw was Saad Rafi, Chief Executive Officer of the Toronto 2015 Pan Am Games. He was joined by Amanda Martinez – a Toronto-based singer/songwriter with Mexican and South African roots – who served as the draw’s second host.

Local soccer star Dwayne De Rosario, along with Nigel Reid and Ellen Stoumbos, were also present as the on-stage analysts for the soccer draw. De Rosario, who is the son of Guyanese parents, adds to the collection of personalities who help reflect the diverse communities of Toronto.

As one of Canada’s best soccer athletes, who himself played in the 1996 Pan Am Games in Winnipeg, De Rosario knows that the Games will be an excellent introduction to other cultures for the athletes and fans alike.

“When I played in the Pan Am Games… I got to meet people from other ethnic backgrounds and it gave me a greater perspective of different cultures.”

Naki Osutei, who serves as the Director of Public Affairs and Social Legacy for the Games, is partly responsible for making sure that the Games reflect and impact different communities in Toronto.

“…we’ve got a community outreach team that has been working very closely with different communities, and in large part really working the communities that represent the nations of the Games.” said Osutei.

Furthermore, she added, “we’ve got a Caribbean working group that has been convened, that are developing initiatives that will support engagement from the games. In addition to that, from a business perspective, we’re working with different professional associations making sure they are aware of the opportunities found within the games.”

As a daughter of Ghanaian parents, Osutei is just one of the many diverse people working behind the scenes for this multicultural, multi-sports event. As stated earlier, it will be impossible to adequately appease every ethnic community but the importance of the Games, much like the symbolism of the competition, is to reflect and include different cultures.

Whether you were born in an African or a Caribbean country, or maybe you were born in Canada with parents who migrated here to Toronto, the beautiful game of soccer (football) most likely conjures feelings of imagined or real allegiance to those roots; if not but only for a short period of time.

The women’s “Group A” teams will include: Mexico, Columbia, Argentina, and Trinidad and Tobago. The team most expected to emerge from this group is Mexico. Since the inclusion of the women’s game in 1999, the Mexican women’s soccer team have medalled in all but one of the Games.

The women’s “Group B” teams will include the host country, Canada, as the women’s national team look to repeat as champions after winning the Gold in 2011. The rest of the field will have Costa Rica, Ecuador, and Brazil vying to unseat the Canadians.

Key women’s matchup: Canada vs. Brazil on July 19. The two-time champion Brazilian women’s team lost on penalty shots to team Canada in 2011; they will be looking to avenge that loss.

The women’s soccer competition allows the nations to have representation from their top players, without an age limit. Some of the top ranked women’s players might play for their countries but the schedule of the FIFA Women’s World Cup (June 6 to July 5) will only give a window of six days before the Pan Am Women’s soccer competition begins. It is yet to be determined if this factor will result in some key international soccer players choosing to be absent from the Games.

On the other hand, the men’s competition is more transparent as the competition only features Under-22 players. Unless one is an international soccer almanac type of fan, one will not get to see any recognizable household names on the team rosters. The positive here is that the talent on display will surely be hungry to prove themselves, as they hope to eventually move up to the senior ranks for their countries.

In “Group A” of the men’s competition – Canada, Panama and Peru will try to edge out the Brazilian squad as they are the group favourites.

“Group B” includes: Uruguay, Paraguay, Mexico, and Trinidad and Tobago. Mexico is the historical favourite in this group; they are four-time winners of the tournament.

Key men’s matchup: Canada vs. Brazil, on July 12, will definitely be the highlight for Canadian soccer fans but a potential matchup between Mexico and Brazil will be the hot-ticket from the men’s draw.

A lack of established stars from the men’s competition, and likely from the women’s, will not diminish the level of play as national pride will permeate the matches.