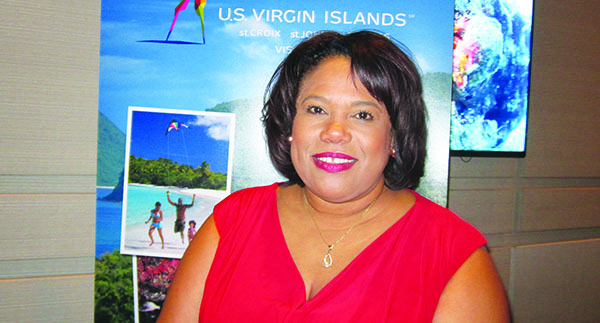 Photo above is of Beverly Nicholson-Doty, Commissioner of Tourism, United States Virgin Islands.

TORONTO, Ontario – Beverly Nicholson-Doty, Commissioner of Tourism, United States Virgin Islands, wants visitors to her homeland to “lean back and lean in” and enjoy what the country and the Caribbean region has to offer.

She was in Toronto for a few days and on April 16 held at a reception in Yorkville promoting the tourism experience of the islands of St. Thomas, St. Croix and St. John, but also championing tourism in the region.

The former chair of the Caribbean Tourism Organization is encouraging the Caribbean diaspora here to experience the islands of their ancestry.

Nicholson-Doty noted that the U.S. Virgin Islands is a transit port for many people that were going to the U.S., Canada and other places so there is an “incredible mix of people from around the Caribbean that live in the Virgin Islands.”

“We are a potpourri of many, many people throughout the Caribbean, the eastern Caribbean in particular, but there’s people from all over the Caribbean here in the Virgin Islands. We feel that its important that we, we certainly are always inviting Virgin Islanders to come home, bring your children. You know something, so many Virgin Islanders have had or people from the Caribbean, in general, they have moved away for economic reasons, whatever the reasons, but it’s important that they come home. It’s also important for them to have their children connect to their history and to their culture, and to the history and culture of the region,” she said.

The population of the U.S. Virgin Islands is 110,000 however 55,000 people that were born there live outside of the country.

Nicholson-Doty said the Caribbean is the most tourism dependent place in the world and she thinks that it is extremely important that “as Caribbean people we support our own.”

A reggae song is used in the promotion of an advertising campaign, “Virgin Islands Nice,” which started with one of the local artists, Delyano Brown, better known as Pressure Busspipe.

It may take a little bit more effort to travel to the U.S. Virgin Islands but Nicholson-Doty, says it is worth it.

Asked whether there were plans to have flights from Toronto to the U.S. Virgin Islands, she said she would be speaking to Canadian airlines during her visit.

“It certainly is important to us but we also recognize that we are a small destination and we have to have the growth and so that’s why it’s important to co-chair, like with WestJet and American Airlines but we certainly are always open for where the opportunities are for some direct service as well.”

The company, Canlink Travel Representatives, has represented the country for the last eight years in Canada.

Nicholson-Doty said the April 16 event was the largest that she has done in Toronto and that her visit was to say thank you because the U.S. Virgins has received great media coverage throughout Canada.

“But we also wanted to provide updates. There’s some new things that are happening: we have a new governor that has a passion for us to create experiences so that people come and they want to come back. We really want people to understand that we have three incredible unique islands. You may visit one on this vacation, there’s always two more to go to, or you can do all three in one vacation,” she said.

The commissioner of tourism said they have created visitor experience directors “so that people are looking everyday how we make sure that when people come to the U.S. Virgin Islands that they have an incredible experience, that it creates a memory that makes them want to return again and again.”

St. Croix is the lesser known and largest of the islands and according to Nicholson-Doty, it takes visitors on a step back in history. It is offers a rich mixture of history, culture and food where visitors can see someone operating a coal pot and frying johnnycakes.

St. Thomas, known for cruise activity, sells more Brightly watches than anywhere else in the world, said the commissioner.

A sixteen-century fort, which fortified the harbor and was under renovation for several years, will re-open during the summer and houses a museum.

The island also has the second oldest synagogue in the western hemisphere, which is one of the few that still has its sand floors.

Nicholson-Doty said St. John has the most beautiful beaches in the world and two-thirds of the island is reserved as a national park.

She also mentioned Water Island, which is where she started her career. It was deeded to the U.S. Virgin Islands in the 1990s and had been a primary positioning station during World War II.