TORONTO, Ontario — Prominent Guyana-born social science scholar, Professor Emeritus Dr. Wolseley (Percy) Anderson, passed on “as he lived — on his own terms and not without a fight” — on Sunday, May 3, at the Sunnybrook Health Sciences Centre, Palliative Care unit.

He is survived by his wife, Beatrice, of 59 years, and his daughters, Pamela Grant (Husband — Carl) and Camille Allen (Husband — John) and his grandchildren: Daniel and Gillian Grant, and Ryan and Nadia Allen.

His daughter, Pamela, remembers that, although her father always had time for many in the community — his students, extended family and friends — he was always there for her and her sister, Camille.

“We were talking about it yesterday, and couldn’t recall a time when Dad ever said, or indicated, that he was too busy for us… and that was especially amazing, given he was either out at community meetings, or holding community meetings in our home every day, including Sunday,” she told Pride News Magazine.

The Bishops High School Alumni Association of Toronto (BHSAA) for which Anderson and his wife, Beatrice, were staunch supporters since its inception, 30 years ago, upon hearing of his passing, said, “Percy was highly respected and well-known within the Guyanese community in Toronto, not only for his erudition but also for his ebullient personality. We shall miss him dearly, and extend our heartfelt sympathy to Bea, their daughters and all their family.”

Dr. Anderson was born in the tiny village of Vauxhall on the West Bank of the Demerara River, in Guyana. At the tender age of 11 he won a scholarship to attend secondary school at the prestigious Queen’s College — the first student in history from the West Bank to do so. It meant moving away from a one-room school and his home in the neighbouring farming village of Bagotville, to attend school and live in the capital city of Georgetown.

A Professor Emeritus of Social Sciences at York University since 1994, Dr. Anderson began his career as an educator, at the elementary level, at Christ Church Anglican School. Upon graduating as top student from Teacher’s Training College, he returned to Queen’s College to teach Latin and then to St. Swithun’s Anglican school, where he was promoted to Vice Principal, before heading off to UWI, Mona Campus, to earn his First Degree in History.

He returned to Guyana in 1961 and was appointed, shortly thereafter, to the position of Education Officer for the Essequibo-Pomeroon Region. Two years later, he won a scholarship to London University, where he studied textbook production, while earning his MA in Education, with distinction.

The politically astute scholar immigrated to Canada, from England in 1966, with his wife, Beatrice, and daughters, Pamela and Camille, where he earned his PhD at OISE, and became a well known educator and community leader, who taught at York University for 31 years.

As Associate Professor in the Social Science Division, his teaching, research and writing activities focussed primarily on the areas of Education and Caribbean-Canadian studies. For over four decades, Dr. Anderson actively initiated and supported a number of community groups, such as, the Black Education Project, Canadian Alliance Of Black Educators, Organization for Caribbean Canadian Initiatives, Urban Alliance on Race Relations, Jane Finch Community Legal Clinic, whose objectives were, and in many cases, continue to be, about promoting and improving the integration, settlement process, as well as the contributions, of people of Caribbean cultural heritage to the Canadian mosaic.

In addition to his work here in Canada, Dr. Anderson served as a consultant and advisor to the government of Kenya in human resource development and planning. On several occasions he returned to his native Guyana where, in addition to being a visiting professor at the University of Guyana, he served as a World Bank consultant to Guyana’s Ministry of Education and Social Development.

“We always felt included, loved, supported and of course challenged to be the best we can be — anything we wanted to be — and to live a life in service to others. He set high standards while being our greatest cheerleader and enabler. Yes, he critiqued all our school assignments before we submitted them and thankfully our teachers were far less meticulous than he ever was,” said Pamela, in fond remembrance of her father.

As PRIDE was going to press, on Tuesday, many friends expressed condolences, well-wishes and memories of Dr. Anderson.

Neville Allen, a long-time friend told PRIDE, “Percy had been a friend for many years. Our discussions were always about the politics of Guyana and our thoughts about the remedies to make it all right, as we saw it. These discussions usually went on to the dawn of the next day, of course, there were drinks to make it all lively.

“Percy was always fun to be with; (he had) a very dry sense of humor that always ended up in roaring laughter. He will be deeply missed by all of us.”

Victor and Sharmon Carrington remembers Dr. Anderson thusly: “Percy Anderson was a gentle and jolly giant in his own right; a man for all seasons, always ready with a humorous comment, but wisely and tastefully declared. Percy appreciated life and he radiated this glow wherever he went; he will surely be missed, but never forgotten.”

George McLean, a friend since the 1970’s, echoes the sentiments about Dr. Anderson’s humour, “What attracted me mostly to Percy was his sense of humour, his laughter and more importantly, his intellect and strong sense of family. Whenever, and wherever, we met, he was consistently jovial and energetic and brought humour and joy to every occasion.”

And Malcolm Cho-Kee, another loyal friend to Dr. Anderson, fondly recalls their happy times together, “After countless years of friendship, many times discussing the politics of Guyana and sharing great times of laughter, you have finally bid farewell to this world and now are in the hands of God.

“I can see you sharing your “silly” jokes and lovely contagious laughter, to all the angels in Heaven. Your sense of humor, contagious laughter and positive views of all ‘not so nice things’ are the few things that I will miss of you. I have been enriched by your friendship…”

Dr. Anderson is predeceased by his parents, Emily and Simon Anderson, of Guyana, and his siblings, Ashton and Wilfred Anderson, Elvina Carter and Hyacinth Bagot. His surviving siblings are Inez Fortune, Claude Anderson, Joycelyn McGarrell and Claudette London.

The public visitation and viewing for Dr. Anderson will be held on Thursday, May 7, between 6:00 PM and 9:00 PM, at Highland Funeral Home & Cremation Centre – Scarborough Chapel, 3280 Sheppard Ave. East. And the funeral service will be held on Friday, May 8 — at 10:00 AM — at St. Margaret-in-the-Pine’s, 4130 Lawrence Avenue East, in Toronto.

Dr. Anderson epitomized dedication and commitment to excellence in education, and by his deeds, challenged his students, colleagues, friends, family, and all whom he encountered, to do the same. May he rest in peace. 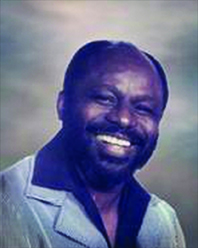