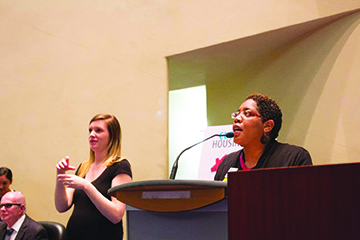 Trinidad-born Activist Campaigns To Save Co-op Housing In Canada

TORONTO, Ontario — A coalition, which includes members of the African Canadian community, is fighting to keep thousands of Ontario’s most vulnerable residents from possibly losing their cooperative housing units.

“The housing co-op is like a village – a healthy environment for people of all ages, ethnicities and walks of life to come together and thrive,’’ said Trinidad-born Nicole Waldron, a member of Atahualpa Co-operative Homes.

The CHF and other groups and individuals, including prominent politicians, are concerned about the future of affordable housing in Ontario, where nearly half of the province’s 550 housing co‑ops receive funding from the federal government to provide rent-geared-to-income (RGI) subsidies to low-income households.

Agreements under which this funding is provided have begun to expire and there is no commitment yet to replace this support.

Waldron and other advocates for housing co‑ops say, that without government intervention, some 7,000 households could lose the RGI subsidies, and they are on a public campaign to raise awareness of the issue.

“The funding needed to maintain the co‑op share of these subsidies is minimal, approximately $4.5 million over the next five years; but, the impact it would have on these households is fundamental,” Harvey Cooper, Managing Director of CHF Canada’s Ontario Region,’’ said at a rally in Toronto, last week.

“Keeping people in their communities by maintaining rent supplements is one of the most affordable and effective ways to fight the growth of poverty in Ontario. We hope that the provincial and federal government will come to the table to find a solution.”

The “Close the Housing Gap Rally’’ at City Hall was supported by the CHF of Canada, CHF of Toronto and Toronto Community Housing Corporation.

“Those rent-geared-to-income subsidies give our most vulnerable members the simple dignity of belonging, the dignity of a home,’’ Waldron said at the Toronto rally.

The campaign rally was backed by Senator Art Eggleton, who said that “decent, affordable housing is a basic right and governments need to work together to fulfil their duty to provide it’’. 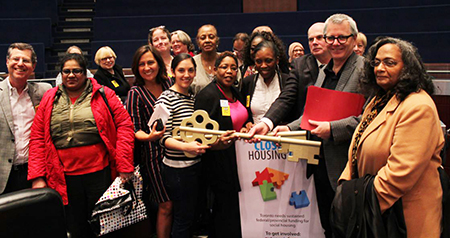 Other speakers – such as Councillors Joe Cressy, Pam McConnell and Ana Bailao, as well MP Adam Vaughan and representatives of tenant groups and labour organizations – demanded that federal and provincial governments invest in co-op and other affordable housing programs.

“Low income people are facing losing their homes,’’ said Executive Director of the CHF of Toronto, Tom Clement. “Without assistance from government, seniors, families, and the disabled may find themselves without housing. They will be forced to go on the social housing waiting list which means that they will not be housed in this decade.”

Waldron’s aunt, Muriel Donawa–McDavidsen – her mother’s oldest sister – was a former Trinidad government minister, and the first female deputy leader of the People’s National Movement (PNM). And, a grandfather was a PNM founding member.

“I come from a political family,’’ Waldron told Pride News Magazine. “It’s in my blood.’’

“For my family, living in a co-op is similar to how we lived in Trinidad,’’ Waldron said. “I have proudly lived in the same co-op for twenty-one years. It is the only home my son has ever known.’’

According to Waldron, “while there will always be people who come and go, for many of us a co-op is where we plant roots. It’s not housing, it’s home. When you know the value of community, it’s shocking to see it so easily dismissed. If governments allow the subsidies to disappear when federally-funded co-ops reach the end of their operating agreements, it will hurt our communities’’.