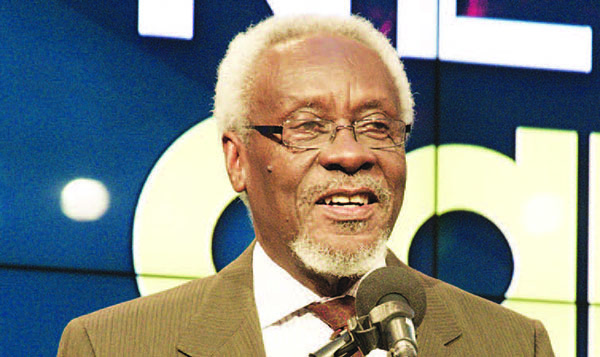 Photo above is of Jamaica’s former PM, P.J. Patterson. Photo by Eddie Grant.

TORONTO, Ontario — Jamaica’s former prime minister, P.J. Patterson, has issued a challenge to the Caribbean diaspora regarding the education of children in the region.

“Let us make educating our children our collective responsibility as Caribbean people,” he urged, noting that it will require new strategies to help at-risk students in school and learning and more assistance for boys who have left school prematurely and are hanging out on the corners.

“We want to provide every student in the Caribbean with a quality education and with your support, with your commitment and the right investments, we can make this happen,” he said.

Patterson, Jamaica’s longest serving prime minister, 1992-2006, was the keynote speaker at “Network Caribbean: Borderless Possibilities,” a town hall organized by GraceKennedy and Western Union in collaboration with the Caribbean Consular Corps at the CBC Atrium in Toronto on May 6.

He said education has to be a process that enhances values and reflects the right attitudes that “expands the minds of our people at the frontiers of knowledge and promote respect and tolerance throughout the social order.”

“As a Caribbean people, we have to know who we are. We have to know our history, where we come from, where we are, because without that we will not know where to go, and like Columbus, unnu gwine end up in the wrong place.”

The former prime minister said recently Canada was looking for people to work in port development here and visited Kingston where during one weekend they scooped up everybody at the Port Authority.

“When we invest in education it is not charity, it is enlightened self-interest,” he said, with an advice to companies that the time is right for full entrepreneurial
engagement for direct investments.

He also championed the importance of mentorships that can be done from here with young people in the Caribbean.

“In return, Caribbean governments need to support you in ways that reward quality and innovation as together you make down payments on the success of the next generation and those to come.”

Patterson also spoke of the knowledge economy, an area, he said, in which the Caribbean has an advantage, noting that knowledge is power and knowledge is money.

He said some things have to be looked at with fresh eyes, alluding to what is happening in Jamaica with the opportunities provided by the medicinal aspects of marijuana.

However, he cautioned that a number of things have to be done, including businesses encompassing the people who have been growing it for years and putting the right legislative framework in place “because if we don’t do it, companies from the United States and from Canada are going to come in and exploit it too and shut us out.”

Patterson said the time has come when whatever is the field of economic activity, the people of the Caribbean must be involved.

“We are very proud of those who come from the Caribbean who have excelled in every field of endeavor in Canada — in law, in medicine, in education, in the arts, in sports, in business, as managers — they have made us very proud but they have contributed substantially to making Canada the great country that it is,” said Patterson, who is the president of Heis Consults.

He noted that when he became prime minister in 1992, he shared his vision of Jamaica being a land without borders; 2.5 million were then living inside and 2.5
million outside.

At that time, he said Jamaicans had to create a partnership and form synergies in order not only to build the country and the Caribbean but also “to contribute to the development of the land in which you work and in which you reside.”

Patterson said many in the diaspora have remained passionate to their homeland because they care about its future and understand the culture.

“I want to say to you, you have had and will continue to have very important role in the growth and development of your country of origin.”

The former prime minister said while remittances are very important to the national economy, people have to go beyond that.

“We have to find ways and means in which, first of all, those remittances can be of even greater long term value,” he said, urging that people of the Caribbean diaspora look at other possibilities such as making the right investment which will earn dividends and ease the pressure on them in the diaspora.

He said remittances are important to the national economy because the foreign exchange that is coming from remittances, in the case of Jamaica, is second only to what the country earns from tourism.

Patterson said it is more than the money that Jamaica borrows from the World Bank, from the IDB and even from the IMF.

“If we could find a way of mobilizing those savings, we could also be able to generate greater circulation of money within the economy without having to rely on external sources of financial development. And that is something I really want the members of the diaspora community to look at together with us in the Caribbean.”

Noting that he had always encouraged the Caribbean diaspora to play their part in their adopted country, he said that it is not a choice of one or the other because they can contribute to both.

“You constitute a formidable force for the development of the Caribbean and there is nothing disloyal about that. You are not doing a disservice to your country when you defend Caribbean interests wherever they arise. Anytime anybody saying something bad ‘bout yuh country you have a duty to come to the defense of it.”

He said when one looks at incidents that are taking place, whether in Ferguson, Missouri or in Baltimore, Maryland, or even in the U.K, “we in the Caribbean can teach other people, by way of example, how it is possible for different persons of varying ethnic backgrounds to live and dwell together in harmony.”

The retired politician urged the Caribbean diaspora to not be hesitant about political engagement in the country in which they reside because if they don’t have a voice others who have a different interest are going to choose those who will promote their interests.

This message was underscored by Rahel Appiagyei-David, a representative of the Citizenship Initiative Group which encourages permanent residents to obtain their citizenship to be able to vote.

He noted that where people work and reside is now of less importance than it was in times past.

“The borders of national space are becoming increasingly irrelevant in the era of globalization and that is going to continue to be of increasing importance in the future, ” he said, noting that Caribbean people are transnational.

He emphasized that people in the diaspora have to find a way of coming together as members of a Caribbean family because the problems and concerns
that “we face go beyond whether you’re a Jamaican, or a Grenadian, or Vincentian.”

“We are a transnational people, not restricted to territory but defined by culture which extends across territories. The importance of the Caribbean diaspora in
the economic and social development is enriched when we forge an inseparable partnership between us. And, we are reminded that all a we a one.”

Wehby said the company’s journey to be an international company started in Canada, in Ontario in 1983 starting with Nicey’s West Indian Fine Foods and Charlie’s West Indian store.

“For us to get growth in Jamaica, we’re going to need in this new world an educated population,” he said.

Regarding corporate social responsibility, Wehby said GraceKennedy is playing its part by sending 500 children from the inner city to high school and university. The company wants to double that number by 2020 to change the lives of many young Jamaicans.

He is also proud of the sponsorship of the ISSA/GraceKennedy Boys’ and Girls’ Championship – the company’s single largest investment (US$1million) — noting that it is an investment in youth, in schools and in Jamaica.

Mason underscored the importance of education being a sustainable path to growth and said Western Union has invested in that area.

In 2012, the Western Union Education for Better Initiative was started and over the course of time the company has invested over $200 million in helping to facilitate improvements to secondary education needy families around the globe.

Ann-Marie Grant, executive director at American Foundation for The University of the West Indies and Allison Hickling, communication specialist at UNICEF Jamaica also made presentations about education initiatives.

Dr. Vidhya Tota-Maharaj, consul general of Trinidad and Tobago, extended the welcome, noting that there is nothing more powerful than a community coming
together to share ideas and dreams. Storyteller, Sandra Whiting, performed an Anancy story and the Pan Man Pat ensemble provided the music. The emcee
forthe event was Dwight Drummond of CBC TV.