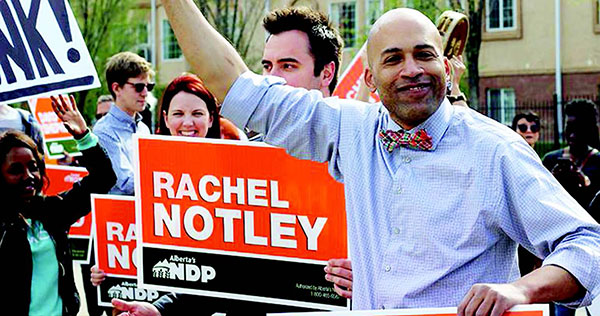 Photo above is of a jubilant David Shepherd celebrating with supporters after his win in last week’s Alberta election. Photo courtesy of the Shepherd campaign.

ALBERTA – Almost every political election produces elements of surprise and, true to form, so did last week’s provincial polls in Alberta, where the New Democratic Party (NDP) ended the 44-year reign of the Progressive Conservatives.

The Alberta PCs, first elected in 1971, had been the longest-serving government in Canadian history.

“We appreciate the trust that Albertans have put in us and we’re going to work hard to live up to it,” said African Canadian David Shepherd, who was elected a Member of the Legislative Assembly (MLA) on an NDP ticket.

In the race among six candidates, Blakeman picked up 25 percent of votes cast, compared to more than 54 percent by Shepherd – a musician, public speaker and recording engineer, with university training in marketing and public relations. He also holds a Bachelor’s degree in professional communications from the University of Alberta.

Shepherd, who is in his early 40s, said he has “nothing but respect for Laurie Blakeman” and that he is ready to fill her shoes in the legislature.

“Thank you to the residents of Edmonton-Centre for electing me to serve as your representative. I’m honoured by the trust you’ve placed in me and will bring the full weight of my abilities to bear in representing your voices and values,’’ promised Shepherd, who has worked in communications for the federal, provincial and Edmonton municipal governments.

Shepherd, who describes himself as “a life-long Albertan with a passion for fair and open government”, is an avid cyclist and environmental supporter.

“We all have the opportunity,’’ said Shepherd, “to make a difference in the (environmental) choices that we make; in the way we choose to live, the things we choose to buy and the types of policies to support. I encourage you to choose to continue to make our city, our province and our world a better place.’’

The Alberta NDP, headed by Rachel Notley, won 53 of 87 ridings, in what some refer to as the “orange crush.” Orange is the New Democrats’ party colour.

It’s the first time the New Democrats have formed a government in Alberta. At the election call, The NDP caucus had just four MLAs, with the Conservatives holding 70 of 87 legislative seats.

Notley’s father, Grant, helped found Alberta’s NDP but died in a plane crash in northern Alberta in 1984. The party’s previous best showing in an election was 1986; it won 16 seats and almost 30 percent of the popular vote.

Ousted Alberta Premier Jim Prentice retained his Calgary Foothills seat, but resigned as PC leader after his party’s defeat on May 5.

“While I am personally saddened by the (voters’) decision, the voters are always right in a democracy,’’ Prentice said.

Notley campaigned on having wealthy Albertans pay more to fund better healthcare and education in the province.

She also pledged to review the royalties oil companies pay to the province; boost the corporate tax rate to 12 percent from 10 percent; impose a ban on corporate and union donations to political parties; and increase the minimum wage to $15 an hour by 2018. The current wage is $10.20.

In her election night victory speech, Notley served notice that her NDP government intends to do things differently to the Tories.

“I believe that change has finally come to Alberta,’’ she said.

“I think we’ll see changes to things like election campaign laws and taking big money out of the electoral process, that can’t help but be good for Alberta,’’ said Urquhart.

Shepherd attributed the NDP’s success to a solid platform of proposals that resonated with many Albertans.

Of the victorious NDP candidates, some are university students and 24 are women.

“It’s a really great group of MLAs,” Notley said. “I’m very excited to be able to rely on their counsel, and their energy and their enthusiasm.”

The new NDP administration will not take office before May 26, but Notley has pledged that throughout her term as premier, her government will “deliver the stable and consistent leadership that our province absolutely needs”.

In Alberta, 33 percent of all legislators now are women. In British Columbia, with 31 women sitting in 85 seats in the provincial legislature, the figure is about 36.4 per cent; and, in Ontario, it’s 34.4 percent female, including Liberal MPP Mitzie Hunter and Premier Kathleen Wynne.

Hunter, MPP for Scarborough-Guildwood, is associate minister of finance, with responsibility for the Ontario Retirement Pension Plan.

According to Shepherd, the NDP’s triumph in Alberta was an “historic day’’ for the people of the province.

“I would like to acknowledge the change that’s swept across our province,’’ Shepherd said in post-election comments.

“You’ve rejected the politics of fear and made it clear you expect better of your governance. Today, we began the work of building the government Alberta deserves. It’s my honour to be part of that, he added.’’