A Track Star In The Making: Introducing Dontae Richards-Kwok

With the Toronto 2015 Pan Am/Parapan Games in a little less than two months away, track and field athletes are still competing for spots on the Canadian men’s and women’s teams.

One of the Canadian men’s track team hopefuls is Dontae Richards-Kwok. Richards-Kwok, who is 26 years old, competes primarily as a sprinter and 4x100m relay runner. He is from Toronto and has Jamaican roots – these roots, as I later found out, play a vital role in his drive to succeed in the sport.

He was training at the York University High Performance Centre (Toronto Track and Field Centre) for his first individual track competition of the season, this coming weekend. The outcome will partially impact his chance of making the Canadian track and field team for the Games. The qualifying period for the Games began on January 1, 2014 and ends on June 28, 2015.

This columnist got an opportunity to do a Q&A interview with Richards-Kwok, who touched on his influences and roots.

Question: Could you please tell the readers of Pride what your ethnic background is?

Answer: I was born in Canada. My dad is Chinese and my mom is Jamaican.

Q: Do ever feel a certain level of expectation or pressure from your Jamaican roots when you compete representing Canada?

A: To an extent. It’s always sort of cool to compare myself to Jamaican athletes ‘cause they’ve had so much success. It gives you the drive to try and bring that out of myself, I guess. I mean, the Jamaicans are obviously very talented. If I can get a little bit of that out of myself for Canada… all the better, right?

Q: Aside from the countless hours that you have put into track and field, what or who is your motivation to keep getting better?

A: All the hard work that you have putting in is a big part of what motivates me. Also I feel like, for me family is a big part. Especially my grandma – my grandma is from Jamaica and like a lot of older people, they came to Canada to find a better life. I just want to be successful to kind of give back. I mean she likes seeing me be successful – I got to school and got to do so many things that she may not have got the opportunity to. I try to do things for her in that way… not getting into trouble and stuff like. She’s my inspiration for a lot of things. The life she’s had and things she’s gone through… shows me that if you have faith and have courage; never to give up. I feel like she’s the perfect example of that in my life and makes me want to strive to be better.

Q: If you don’t mind me asking, what is you grandma’s name?

A: Her name is Avis Lindsey.

Grandma Avis, Pride News Magazine salutes you for all that you have done for your grandson!

Q: When is your next meet? 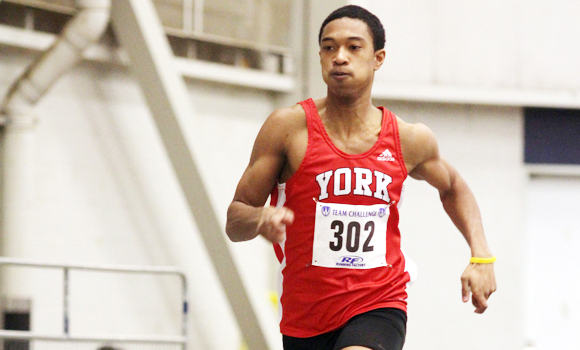 A: My next meet is actually this weekend. I am going down to Florida to open my season. I haven’t run my season yet. I have done relay stuff; we did ten relays and we did worlds but now I get to open individually. We’ve got about a month to qualify for Pan Am [because] the deadline is mid-June. [I’m] hoping to go down there to get some fast times.

Q: What is the competition like for this generation of Canadian track athletes?

A: Canada has really been coming up with young fast athletes. This is good because it raises the bar and everyone has to be on their game. You can’t slack… I feel like in the past you already know who’s going to make the team. I feel like … I don’t want to say deflated but it’s almost like it’s been predicted before it happens. Whereas now everyone is on the ball and there is parity. That’s good for us… just raising the competition level, making everybody train harder and run faster.

Q: Which country poses the toughest competition aside from the Jamaicans?

Q: I like what you said, that you can “bang with the best in the world.” That resonates with the type of confidence from the Donovan Bailey and Bruny Surin days when they had that swag, that confidence. Are you guys connected to them in terms of motivation or advice?

Q: I was doing some research about you and found out that you actually wanted to play basketball (he laughingly says “Yeah”) – instead of track. So what got you to switch over?

A: I think it was being realistic with myself. I really liked playing basketball and I was good for where I was at but, I think, later in my high school years I had to make a choice between what I loved and what I was naturally better and more gifted at. I was okay [at basketball] but compared to guys who have been playing since they were five years old and learn all the basic fundamentals and all that stuff, I felt like I had a way better chance of doing something with track than basketball. Based on what I did in high school… I used to not train and win track meets. When I look back on it, it’s like a no-brainer… like, I’m winning and I’m not really putting much into it. That’s when I actually fully committed myself to doing it [track].

Q: Lastly, what would you like to tell the African Canadian and Caribbean community and particularly the youths in Toronto – since the games are right in our backyards?

A: You look at athletes who have put in work and dedication and really focus on what they want to do … I feel like, in Toronto, a lot of young people just have so much going on. They put themselves into so many different things and get distracted from what they want to do. I think it’s important to have that conversation with yourself be like… my parents brought me here [Canada], how can I use whatever talents I have – whether it’s book, sports to further myself. At the end of the day, you’ve got to give back to your family, right?