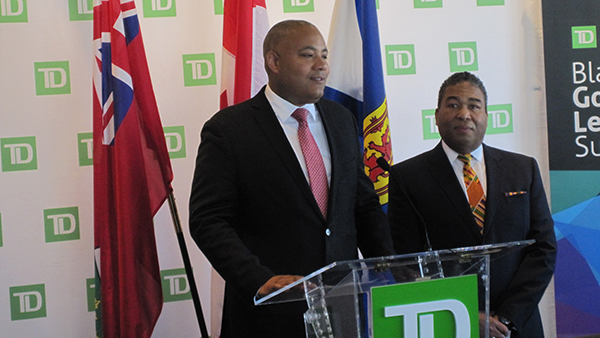 The photo above is of Michael Coteau, Ontario Minister of Tourism, Culture and Sport, left, and Tony Ince, Nova Scotia Minister of Communities, Culture and Heritage and Minister of African Nova Scotian Affairs, speaking at a press conference to launch the inaugural Black Government Leaders Summit in Birchtown, Nova Scotia, June 8-10. The event was held on the 54th Floor of the TD Tower in downtown Toronto on May 14. Photo by Neil Armstrong.

TORONTO, Ontario — Thirteen black politicians will meet in Birchtown, Nova Scotia next month for a historic occasion – the inaugural Canadian Black Leaders Summit, June 8-10 — to increase awareness of the United Nations’ International Decade for People of African Descent, among other things.
The agenda includes an extensive discussion on governance models that facilitate leadership within minority communities, engaging black youth, and opportunities presented by Canada’s 150th celebrations in 2017.

The anticipated outcome of the summit is to promote equity and discuss best practices in the design of programs that embrace opportunity and address current day realities for African Canadians.

Co-chaired by Michael Coteau, Ontario Minister of Tourism, Culture and Sport, and Tony Ince, Nova Scotia Minister of Communities, Culture and Heritage and Minister of African Nova Scotian Affairs, the summit will be held at the new Black Loyalist Heritage Centre which will open on June 6.
Birchtown is the location of the largest free black settlement of its time, 1783-1792, and a prominent location in Lawrence Hill’s award-winning novel, The Book of Negroes.

Speaking at a press conference in Toronto on May 14 on the 54th floor of the TD Tower, Minister Coteau said the idea for the summit was born a little over a year ago in his office when he met with Minister Ince, who was in Toronto to celebrate the launch of Ontario’s Black History Month, to discuss stories of resilience and of success.

They talked about having that conversation on a larger scale resulting in the idea of “an incredible opportunity in Canadian history to do so.”
Coteau traced the long history of African Canadians in this country from the arrival of Mathieu DaCosta in 1603.

“We agreed that too much of Black history in Canada has been overlooked and under-celebrated. And that’s when Michael suggested we bring together other Black government leaders, so we could all connect to more of our shared history, talk about issues we have in common and work together to achieve our collective hopes for the future,” said Minister Ince.

He noted that several months after this meeting, the United Nations launched the International Decade for People of African Descent.

“The Decade is a gift. It’s an opportunity to celebrate our past, acknowledge the challenges of our present and embrace the possibilities that are feasible within a 10-year timeline. The Decade is a unifying force. And, as Black government leaders, it is both an opportunity and a responsibility.”

Minister Ince said, coincidentally, when the Congressional Black Caucus in the U.S. started, it did so with 13 people.

Among the 13 black government leaders invited to the summit are five from Ontario, four from Quebec, two from Nova Scotia, one from Alberta, and one from British Columbia.

Alongside the co-chairs of the summit, others expected to attend are Stephen Gough, MLA for Sackville-Beaver Bank, Nova Scotia; Mitzie Hunter, Associate Minister of Finance, MPP for Scarborough-Guildwood; Granville Anderson, MPP for Durham; Senator Don Meredith and Senator Anne C. Cools, — all from Ontario.

“I am thrilled that the Summit will bring Canada’s Black government leaders to the Black Loyalist Heritage Centre in Birchtown, Nova Scotia. This site is where our story began. For many African Canadians, this is where their ancestors arrived. For others, the site is more symbolic. Birchtown is sacred ground for 3,000 African Americans who took their first steps as free people. In June, Birchtown will be the place where Canada’s Black government leaders will take their first steps together, as a group,” Minister Ince said.

Peter Flegel, director of programs and communications of the Michaëlle Jean Foundation, will discuss ways to empower Canadian youth to use the arts to advance the aims of the international decade.

He commended the co-chairs for deciding to make youth leadership the focus of the summit “because ultimately with such a large proportion of young people in the black communities across the country it’s really important that their voices be heard and that they be included.”

Shelley Hamilton, an award-winning actor, writer and singer, who is Nova Scotian, represented the Black Loyalist Heritage Society at the announcement.

“We get to celebrate the actual opening of this “historical” historical society, and all those that are involved making this opening happen. I am honored to be here, to see this center finally come to its fruition, and it is a proud moment that we as Canadians have a place that we can see another very important aspect of our history immortalized, recognized, and remembered,” she said, noting that her roots run deep, being Metis, Jamaican Maroon and Black Loyalist.

When she was 17, she and her classmates wrote a play, “Freedom,” a gripping recreation about the history of the Loyalist in Nova Scotia and how these black settlers became the first large free black community living in the world outside of Africa, and the hardships and racism they endured.

“They believed when no one else did, they saw the importance of this heritage centre to be built when others didn’t believe the money would come, and over the years others came on board seeing the importance of the legacy, and the belief of the impossible,” she said about the tenacity of the members of the Black Loyalist Heritage Society.

In 2006, an arsonist set their office on fire, destroying many of its archives and historical papers.

Jeremiah Sparks, an award-wining actor, singer and Nova Scotian, was the emcee and sang “We’ve Come A Long Way.”

“As an early contributor to the Black Loyalist Heritage Centre’s capital campaign, TD is a proud sponsor of this inaugural summit and is committed to promoting the history, heritage and culture of Birchtown, NS,” said Scott Mullin, vice president, community relations, TD Bank Group.