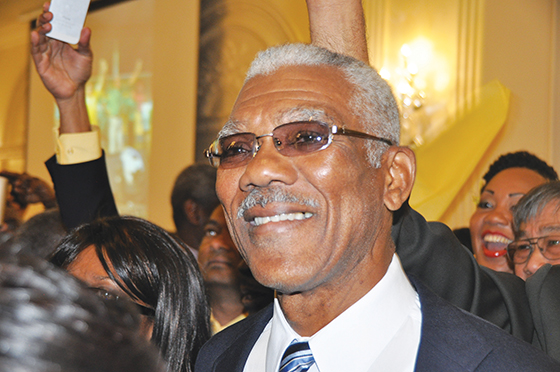 David Granger Sworn In As President Of Guyana

GEORGETOWN, Guyana CMC – David Arthur Granger, a 69-year-old former army Brigadier, was sworn in as the eighth head of state of Guyana on Saturday, promising an inclusive government and urging his predecessor Donald Ramotar to be part of “this movement of national unity”.
Granger was sworn into office by the Chancellor of the Judiciary, Justice Carl A. Singh, just over an hour after the Guyana Elections Commission declared the final results of the May 11 poll that gave the opposition coalition alliance victory over the incumbent People’s Progressive Party Civic (PPP/C).
According to GECOM, the coalition comprising A Partnership for National Unity and the Alliance for Change (APNU+AFC) received 207,200 votes as compared to 202,694 for the PPP/C.
Before thousands of Guyanese nationals, members of the diplomatic community as well as religious leaders, Granger, who has vowed to end race politics in Guyana pledged to be “ a President for all the people”.
He reminded the country that on January 1 this year, the APNU+AFC had declared that 2015 would be the year of democratic renewal.
“We were right. Let us therefore rejoice in the people’s choice, let us embrace each other regardless of religion, regardless of race, regardless of class, regardless of occupation.
“As fellow Guyanese, let us work together to realize our inspiring national motto “One People, One Nation, One Destiny,” he said, urging the people gathered outside the Parliament Building in the capital to hold hands and sing “that famous national song “Let us cooperate for Guyana, Let us cooperate for our land, let us resolve to fight together, see we do it right together….”
The retired army veteran who was trained in Britain, Brazil and Nigeria, had campaigned on a platform of increased security and fighting drug and human trafficking.
He told the nation that while there would be rejoicing, the country had to face up to the stark reality of unemployment, poverty and other social ills, including crime.
He described Guyana as the “best, the biggest and the most bountiful country in the Caribbean” adding there was good reasons for rejoicing.
“We rejoice not only in the favourable results, but more particularly in the enjoyment of our democracy,” he said, thanking all the international observers, GECOM and other stakeholders who played a part in ensuring that the polls were free, fair and transparent.
He also promised not to prorogue the Parliament, a reference to the decision of former president Ramotar who prorogued Parliament last November, rather than allow for a debate of no confidence in his administration.
Granger said he was encouraging the new legislators, who will be sworn in on Independence Day on May 26 at the National stadium, to be faithful to their oath of office and their constituents.
“Guyanese the elections are over, the people have chosen their representatives, the Constitution has been respected, our democracy has been fortified. Let us now put past rivalries behind us and work in unity to banish poverty, ignorance, fear and hatred.
“We assembly here today to witness the swearing in, not of a party leader, but of a president of all the people, and I shall be a good president for all the people,” he told the crowd in the sweltering heat.
He thanked the voters for choosing the “most multi-party inclusionary democracy” organization to lead the country, saying “We are convinced this is the best way to overcome the past, and the damage done to the country.”
Granger said that agreement had been reached with the outgoing administration, on the establishment of a transition team “to facilitate the transfer of assets and the transmission of information, needed to ensure the continuation of government, and to guarantee the stability of the state.
“And in so doing, I extend the arm of friendship to former president Donald Ramotar and members of the PPP/C to join this great movement for national unity,” Granger told the cheering crowd.