The chairman of the Guyana Elections Commission (GECOM), has dismissed a call from the People’s Progressive Party/Civic (PPP/C) for him to resign.
Dr. Steve Surujbally told reporters that he is in no way concerned about the call from the PPP/C. 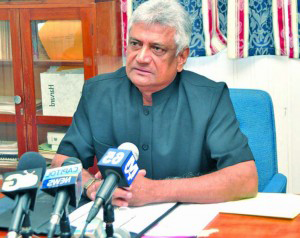 The party in a statement, on Monday, pointed to concerns raised before the May 11 general and regional elections, including their dissatisfaction of how Surujbally handled the electoral process.
“Fears were also expressed about the removal of the foreign IT Specialist at a critical time just two weeks before the elections and the denial of requests for public disclosures of GECOM Elections Day staff. This lack of transparency and willingness to enhance public trust and confidence by GECOM in the face of blatant infiltration of the machinery by known APNU+AFC activists is an indictment,” the PPP/C statement said.
According to the party, the various issues have contributed to the loss of confidence in the GECOM machinery and in particular, the chairman. However when contacted for a comment, Dr Surujbally was in no way bothered by the Party’s call.