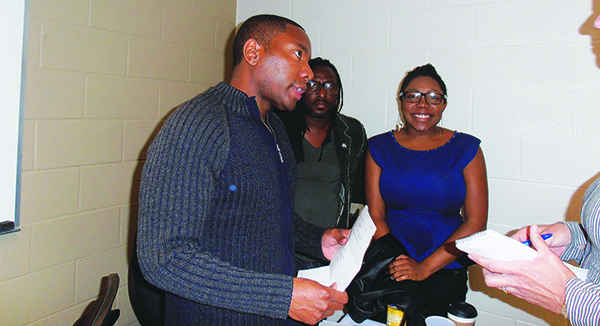 Ontario Premier Urged To Speak Out On Carding “Assault’’

The photo above is of reporters being addressed by ABRN members (left to right) Chris Williams, Dr. Rinaldo Walcott and Pascale Diverlus. Photo by Lincoln Depradine.

TORONTO, Ontario — Members of coalition opposed to carding – the police practice of stopping, questioning, and documenting a person, and which is said to overwhelmingly targeting African Canadians – are concerned at the silence on issue by Ontario Premier Kathleen Wynne.

The Toronto-based Anti-Black Racism Network (ABRN) is calling for action to be taken, if the concerns about carding are not addressed by other such as Toronto Mayor John Tory, newly appointed Toronto Police Chief Mark Saunders, and chair of the board the Toronto Police Services, Alok Mukherjee.
“Carding must be abolished without prejudice,’’ ABRN member Dr. Rinaldo Walcott told Pride News Magazine.

“We need to engage the premier and the mayor in a conversation about the ways in which policing particularly impacts the Black community. The same way that the premier has led on questions of sexual violence, it is imperative that she, too, leads on the questions of police violence and poverty, poor housing – all of these issues that are affecting Black people’s lives in the Province of Ontario.’’

Walcott, an Associate Professor at the University of Toronto, was one of the speakers at a May 13 news conference of the ABRN, which describes itself as “a group of scholars, activists, professionals and community members’’, who are “concerned by the ongoing declining prospects that Black people continue to face in Canada, specifically Toronto’’.

Police carding must be considered as an “assault’’ on the African Canadian community, said Walcott, who was joined at the press conference by Dr Akua Benjamin, an Associate Professor and Director of the School of Social Work at Ryerson University; Ryerson journalism student Pascale Diverlus, a founding-member of “Black Lives Matter – Toronto’’; lawyer Anthony N. Morgan of the African Canadian Legal Clinic (ACLC); and Chris Williams, a York University PhD. student and a member of the “Toronto Police Accountability Coalition’’.

“Some of our most important Black community associations have to refuse to meet with mayors, premiers and MPs, who refuse to be responsive to our communities in ways that allow us to be able to live our lives like other citizens,’’ Walcott urged. “We must respond similarly by saying we will not meet with you, if you do not value the contributions that we bring to the table.’’

ABRN members and other community activists say the policy amounts to an arbitrary detention, and violates rights enshrined in the Canadian Charter of Rights and Freedoms.

They also argue that no evidence exists to demonstrate that carding impacts crime by reducing criminal activities.

Morgan, policy and research lawyer at the ACLC, said that “instead of preventing crime, anti-black police practices seem only to be effective at mass criminalization and incarceration of the African-Canadian community’’.

He said, “at no time in the history of our city has a mayor of Toronto, a chair of the Toronto Police Services Board, or a Minister of Community Safety and Correctional Services ever pointed to a modicum of conclusive evidence to demonstrate that over-policing of Black communities actually decreases or prevents crime’’.

According to Diverlus, “police practices such as carding serve as a precursor to other forms of violence. In a broader context, violence isn’t just always physical. Sometimes the most aggressive form of violence comes out of politics of exclusion’’.