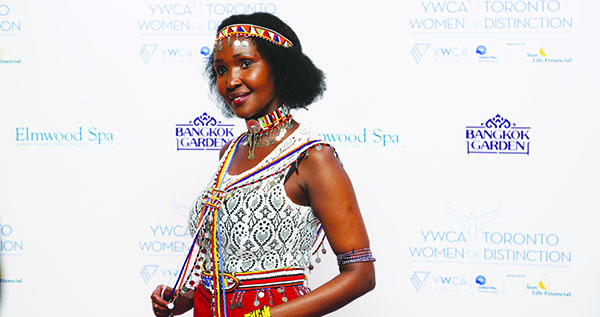 TORONTO, Ontario — Seven women were recently recognized at the 35th YWCA Toronto Women of Distinction Awards for creating opportunities that improve the lives of women and girls in the city.

Heather McGregor, CEO of YWCA Toronto, and Marli Ramsay, Board President, described the recipients as “passionate and courageous women” who are “transforming the lives of women and girls in Toronto and around the globe.”

The annual awards presentation was held at the prestigious The Carlu in Toronto on May 21.

“The award recipients are women whose leadership, determination and innovations are challenging the barriers women and girls face, As our largest fundraiser, the Women of Distinction awards brings together our friends and supporters, who give generously so we are able to continue to provide the critically needed services and supports women and children need to thrive,” said McGregor.

Lesancha is not only the first woman, but the first person from her Maasai village, Loodariak, to graduate from university. Anitafrika is an internationally celebrated African-Jamaican-Canadian dub-artist, arts educator and theatre director.

Ninety-nine per cent of women and girls in Loodariak are illiterate and pre-teen marriages are common.

Lesancha was to be married at the age of 12 but her mother convinced her father to allow her to obtain an education instead.

With help from World Vision, she was able to go to school in her village and come to Toronto to study social work at Ryerson University.

“There are so many things that inspire me. First of all, my own personal journey  because I have faced a lot of challenges but every challenge has a tie to an opportunity, and my community, because I’m Maasai. I grew up in a Maasai community, we just love who we are, we really embrace our culture; we haven’t changed to adopt western ways of life,” she says, noting that she’s always in touch with her community.

Lesancha says her parents really believe in her and while her dad makes her laugh and is very traditional, her mom is the inspiration and the reason that she is in school.

Being the first one of sixteen children, she sees herself as a role model for her younger siblings and all the young people in the Maasai community and in Kenya who believe in her.

“I tell myself I cannot give up because there are so many other people that are looking at me even when its tough — that keeps me going.”

There was a time when Lesancha did not appreciate her culture and changed her name to an English one. This happened at a much younger age when she got baptized because the school that she attended in Nairobi was affiliated with a church.

The anti-oppression social work program that she did at Ryerson, which taught her about colonialism and where she heard about slavery for the first time, helped to change her perspective of her culture.

She has collaborated with the women in her village to create the SupaMaasai Women’s Beadwork Cooperative to provide women with the means to build economic security.

The cooperative markets handcrafted, artisanal items produced by the Maasai women while building the women’s skills in entrepreneurship and small business development.

Lesancha recently established the Maasai Girls for Education Project which includes building residential housing for primary school girls so they don’t have to walk 2-3 hours a day to attend school.

It also involves conducting workshops on gender equality, female empowerment, and career counseling. Her long-term vision is to construct and establish the first ever Maasai Girls Secondary School in Loodariak.

Anitafrika was recently featured as a top ten poet on CNN and is the recipient of a Vital People award from the Toronto Foundation for her relentless commitment to social justice through the arts. 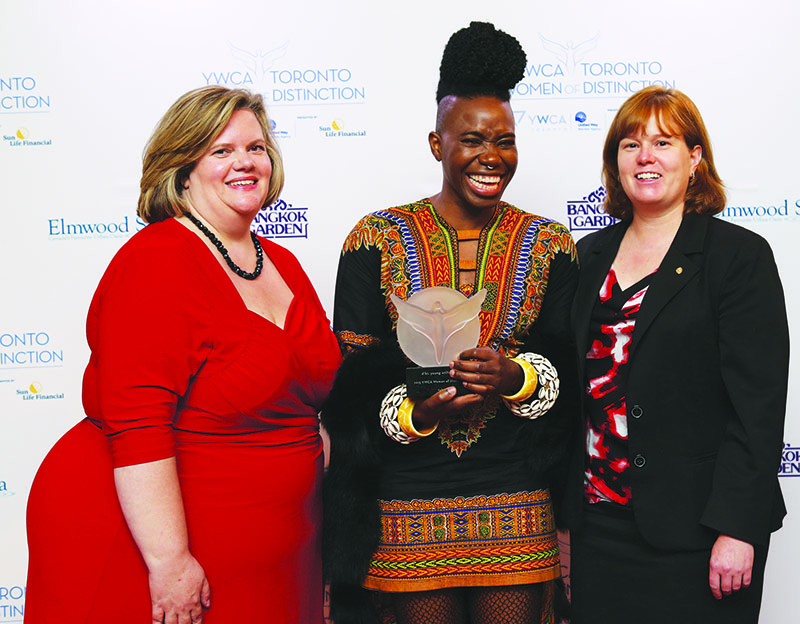 The actor, artist, and storyteller is the founder and artistic director of the Watah Theatre Institute where she designs and facilitates residences for emerging and established artists.

“It’s really humbling and really emotional and inspiring. It makes me reflect on those moments when the challenges are so deep and so profound and it makes you think when you move through those moments, what you possibly can receive is a community ritual of celebration that is recognizing not only me but recognizing everyone who works hard for a better and a more just world,” says the published author of ten plays, two collections of poetry, six dubpoetry albums, a comic book featuring a female superhero called Shemurenga and numerous anthologies.

Her Pan-African trans-disciplinary explorations of identity, gender, sexuality, class and human experience continue to make an indelible mark on the Canadian and global cultural landscape.

She feels totally enveloped by the creative community in Toronto and credits her mom and the supportive community.

Her mother, Anita Stewart, is a Jamaican pioneer dub poet and was a member of Poets in Unity.

This year, YWCA Toronto will support more than 11,000 women and girls across the city by providing emergency shelters, affordable housing, employment training, and key supports for women and children who have experienced violence.

After showing a video featuring the YWCA Toronto’s 1st Stop Shelter, which has been helping women facing violence, poverty and mental health, addiction and lack of affordable housing, Tonika Morgan, an African Canadian woman who lived in the shelter, encouraged patrons to help women and girls escape the cycle of poverty.

Come September, Morgan, whose admission to Harvard University attracted much media attention and support for her tuition through crowd funding, will start her Masters at the Ivy League school.

Last year, 1st Stop Shelter housed 239 homeless women, some of whom were in their 80’s but most were girls in their teens. It is Toronto’s only shelter for young homeless women.