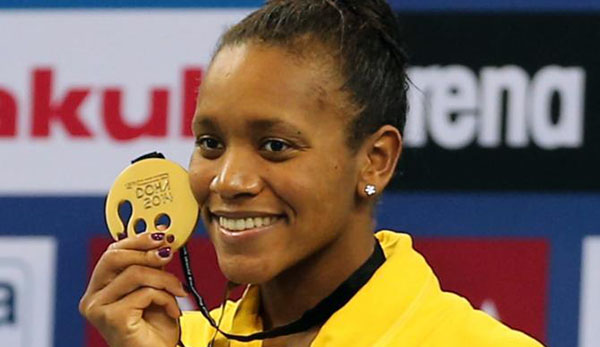 Photo above is of Alia Atkinson with her Gold Medal in the 100-meter breaststroke at the Short Course World Championships in Doha, Qatar (KARIM JAAFAR – AFP – GETTY IMAGES).

If you are a black person of a certain age living in North America, at some point in your life, you would have heard some sort of saying or pseudo joke about black people and swimming. A colloquial example begins something like this: “Everybody knows black people can’t swim….”

This statement obviously does not apply to Alia Atkinson because of what she has accomplished in the pool, but it is an unfortunate reality for so many black children and youth, and she is doing everything in her power to change it.  Although she primarily swims for medals, her secondary motivation is to influence the swimming culture in black communities through education and awareness.

In 2014, Atkinson made history when she became the first black woman to win a world title in swimming in the 100-metre breaststroke at the Short Course World Championships in Doha, Qatar. Before her victory in 2014, Atkinson had an attention-grabbing performance in the 2012 Olympic Games in London,  where she finished in fourth place.

In 2011, Atkinson won a silver medal at the Pan Am Games held in Guadalajara, Mexico. Her showings at the 2004 and 2008 Olympic Games also served as major stepping stones for her career.

According to a national research study in 2008 by the USA Swimming Foundation and the University of Memphis, approximately “seventy percent of African-American … children cannot swim.” What this statistic illustrates is a potentially higher risk of drowning. Although the above statistics were sourced from American society, one might conclude the numbers also reflect the numbers of African-Canadian children who cannot swim.

Atkinson will be one of the gold medal favourites during the women’s 100-meter breaststroke competition at the Toronto 2015 Pan Am Games this summer.

After hearing her speak recently during a media event, I got the impression that even though she competes with a Jamaican flag on her swimming attire, she understands how important it is for children in black communities around North America to learn to swim. This is why she is a water-safety advocate and a swimming role model for children and adults.

“…I would love to medal in all the events…”

Those words by Atkinson seem ambitious considering the fact that she would most likely be competing on the relay team, the 100 and the 200-meter events. Ambitious, not as one might think that she arrogant, but rather that she is motivated to reach the podium – reaching the podium not only for personal goals and accomplishments, but also to raise the standard, from a grassroots level, when it comes to how black people view swimming.

“I’m a Special Projects Manager for the International Swimming Hall of Fame and we are trying to promote more water-safety books… and colouring books to get people not only educated but to have children at a younger age have the importance of [swimming] knowledge…. They’ll have the books translated into six different languages, so it’s easily available in the Caribbean and in African nations as well.”

Atkinson stands as the perfect beacon for the children who need to learn how to swim, and hopefully her work will help to reduce the societal stigma surrounding black people and swimming.

“They (Sigma Gamma Rho) have a foundation with USA Swimming that promotes swimming lessons all over the USA. Start to promote black people in swimming – people of colour – to get them educated, to get them in the water and just learning how to swim, so they can help themselves in case something happens in the water … hopefully when I retire, I’ll be able to do more stuff.”

At this point in Atkinson’s career, the big picture is about the little girls and boys who have heard about or have seen her winning in the pool. It is about raising awareness so that black children in North America are no longer part of a statistical number, which paints a dire and disappointing picture.

Atkinson was recently named as the Sportswoman of the Year in Jamaica for 2014. She mentioned that there was a forty year gap between her and the previous swimmer who won this same distinction.

Without a doubt, Atkinson is a role model for young black swimmers all over the world. Hopefully, her recent successes and overall accomplishments can inspire and bring attention to the need for swimming education and inclusion for black people in general.

After she competes in next month’s Pan Am Games, hopefully more black children can take up swimming – taking advantage of the 65 indoor pools, 57 outdoor pools, 106 wading pools, 93 splash pads, and the Kidstown water park that are operated by the City of Toronto.