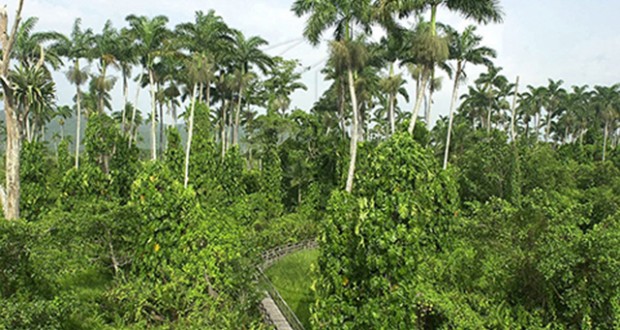 Ian Allen/Staff Photographer The Royal Palm Reserves in Negril, one of the resort town's most noted attractions.

KINGSTON, Jamaica CMC — The Scientific Research Council (SRC) and the National Environment and Planning Agency (NEPA) have signed a Memorandum of Understanding to protect the country’s biodiversity.
The focus is on four primary areas  —  protecting endemic plants using Tissue Culture; maintaining an in vitro germplasm for genetically identical planting materials; propagating endemic and endangered plants for introduction into the wild; and exploring the development of molecular diagnostic tools to identify and characterize plants that are endemic to Jamaica.
Initially, two  species of plant are to be the subject of protection. They are the  Malpighi Proctorii  and the  Turnera Campaniflora. It is expected that these plants will be protected and through tissue culture, planted in other locations. They will also undergo testing for medicinal benefits.
Jamaica is ranked fifth in the world for its biodiversity with over 173 families of flowering plants and approximately 784 species are endemic to the island.
Chief Executive Officer of NEPA, Peter Knight, said the MOU, signed lastweek,  is a very important tool in protecting the country’s endemic plant species, some of which are under threat.
Executive Director of the SRC, Dr. Cliff Riley, said the tissue culture technique has been used to preserve and revive several species of plant life, and to spur economic benefit and food security and safety for the island.
These include ginger, banana, pineapple and ornamental plants.
“Jamaica is a goldmine for scientists, scientific research and development.  Of the 80 plants identified globally with known medicinal properties, 50 are endemic to Jamaica.  There are many opportunities that we have lost because we failed to partner, to collaborate and explore what we have,” he said.