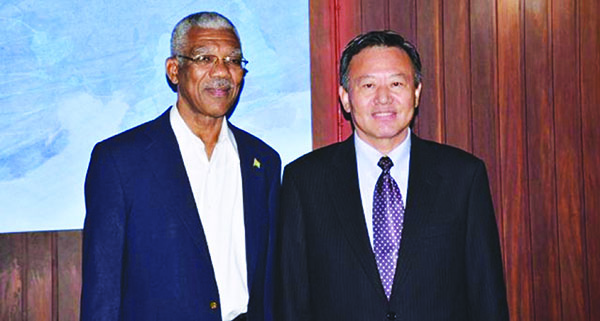 Photo above is of Guyana President, David Granger (left) and Ambassador Liu Huanxing, Special Envoy, Caribbean Affairs, Ministry of Foreign Affairs, China, taking a photo opportunity before the meeting at the Ministry of the Presidency. Photo credit: GINA.

GEORGETOWN, Guyana, CMC – China says it is looking forward to strengthening its relationship with Guyana following the general elections of May 16 that brought a new party to government.

A delegation from China’s Ministry of Foreign Affairs Monday met with President David Granger for discussions on a wide range of issues.

The delegation was headed by Ambassador Liu Huanxing, Special Envoy, Caribbean Affairs of Ministry of Foreign Affairs of China.

Following the meeting the Chinese diplomat said he was pleased with the discussions.

“We have a high number of bilateral relations in the past 40 years, and we are looking forward to strengthening our cooperation in economic trade, culture, education, human resources and other fields.”

In the interim, Ambassador Huanxing said China would remain committed to promoting “bilateral relations to a new high level.”

He said Beijing would continue to provide assistance in the area of health, as they will explore other opportunities to strengthen cooperation with Guyana in this area.

Guyana and China have enjoyed 43 years of diplomatic relations with a government statement indicating that one of the most important areas of cooperation has been in the health sector.