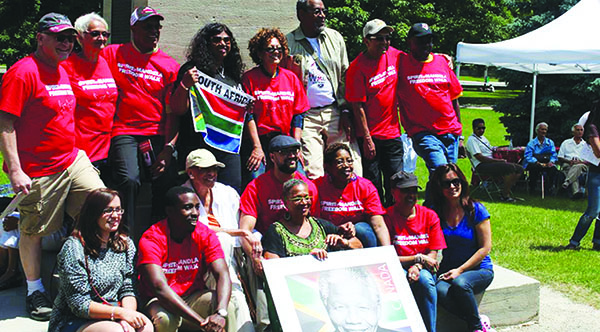 Spirit Of Mandela Celebrated With Defiance

Photo above is of members of the Mandela Legacy Committee taking a break. Photo by Brandon Hay.

Dressed in white T-shirts, the students sang the Canadian national anthem and a special song for the occasion in front of the Ontario Legislature on June 20.

Happening on the eve of National Aboriginal Day, Aboriginal elder, Andrew Wesley, offered a prayer noting that, “Mandela is almost like one of our elders of our people.”

Reflecting on Mandela and on the recent shooting of nine black people in Charleston, South Carolina, Premier Kathleen Wynne said there is a need to build a new partnership based on mutual respect.

“The path to freedom and justice is never clear, never straight, always mired in obstacles,” she said encouraging the forging of a path guided by Madiba’s ideals and principles.

“His legacy continues to show us the way. We can’t be swayed. We cannot assume that we are there.”

South Africa’s High Commissioner to Canada, Membathisi Mdladlana, said he was deeply hurt when he heard the news of the shootings in Charleston, South Carolina and saw what reminds him of the old South African flag flying there.

The Confederate flag, which is considered a symbol of hatred, sits atop the South Carolina Capitol.

He said the South African freedom fighter and first democratically elected president of South Africa stood for equality and democracy for all.

The high commissioner said Mandela was also concerned about the poverty that exists in the world. “The world knows no peace; there is war in every corner,” he said.

Alluding to the issue of carding, Mayor John Tory said he was proud that the Toronto Police Services Board and the provincial government are taking steps to be leaders and to show respect for peoples’ rights while keeping the city safe.

The mayor said they are committed to promoting human rights and social justice.

“Nelson Mandela has been and continues to be a great role model,” he said.

Keynote speaker, Akua Benjamin, social justice activist and director of the School of Social Work, Ryerson University, said to see Nelson Mandela when he came to Canada 25 years ago was rewarding, after her involvement in fighting against apartheid for many years in Toronto.

She said at the time that this was happening there were also calls in this city for justice regarding police violence.

Benjamin listed the names of those who died at the hands of the police, Lester Donaldson, Buddy Evans, Sophia Cook, among others, and noted the leadership of colleagues, Charles Roach, Dudley Laws, Sherona Hall, Hetty Roach, Margaret Gittens and others who waged a war against police violence and brutality.

“Justice must be indelibly marked on this city because we walked these streets,” she said.

The longtime social justice activist said Ontarians cannot afford to live with policies such as racial profiling and carding.

She alluded to the passbooks system in apartheid South Africa and described carding in Toronto as a “sophisticated apartheid system.”

“Black men must show who they are for them to be recognized in the society,” she said.

Among the performers were: Amanda Martinez, Hispanic Canadian singer/songwriter who sang and danced with some in the audience; Digging Roots, Juno-award winner of Best Aboriginal Album in 2010; and others on the bill included poet, Dwayne Morgan; Lorraine Klaasen, South African singer who is compared to Miriam Makeba; and Najjah Calibur, upcoming Hip Hop artist.