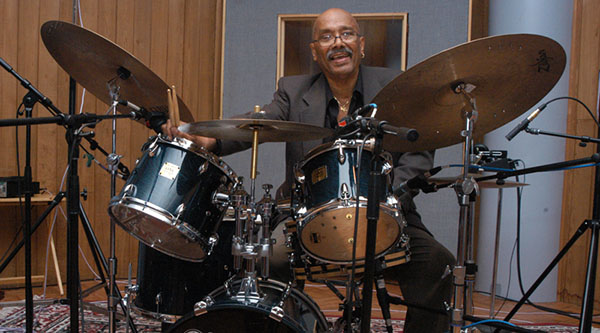 TORONTO, Ontario — It was a fitting tribute to the late Archie Alleyne, Canadian jazz legend, when many of Canada’s finest musicians, his family, friends and fans gathered to celebrate the man who loved making people happy.

The event took place at The Ada Slaight Hall, Daniels Spectrum, an arts and culture hub in the revitalized Regent Park in Toronto and was attended by over five hundred people on June 23.

Tessama Alleyne, the youngest of his three daughters, in the eulogy, said her father lived a life full of melodies and love and that he withstood discouragement and difficulty.

“He’s the gentle giant. He left an indelible mark on everyone,” she said, noting that, “His flesh is gone but his spirit will remain.” She said her father lived a full life.

His life was celebrated in word, music and song, backed by Alleyne’s nine-piece Evolution of Jazz Ensemble, and Kollage, the contemporary hard bop sextet, he co-founded with the late Doug Richardson in 1999.

He met him through Alleyne’s longtime friend, Howard Matthews (who attended the tribute to Alleyne with his wife, Salome Bey “Canada’s First Lady of Blues”), who told him in 2002 that the musician needed a legacy and it was time that they find him one.

The result was the Archie Alleyne Scholarship Fund, founded in 2003, which got its initial funding from money left over from a party that was organized to celebrate Alleyne’s 70th birthday.

Catherine Mitro, director of the Community Music School at Humber College, said Alleyne knew talent when he heard it, “the talent could be raw, it could be untrained, it could be juvenile.”

He went out to The Rex one afternoon when the youth were playing there and listened to them.

“By the end of the afternoon, he had literally lit up like a proverbial Christmas tree based on the talents that he was hearing. And I learnt something about Archie that afternoon. I learnt that Archie is an old school musician. He came on the scene at a time when one honed their craft with the masters in the music and as an old school musician he had a rare and keen ear for talent,” she said.

There was a rare opportunity to see photos and biographies archived by Alleyne chronicling his 60 plus year career in music, business and philanthropy.

Born Archibald Alexander Alleyne on January 7, 1933 in Toronto, he gained critical attention as the resident drummer at the famous Town Tavern for more than a decade from 1955 to 1966.

The legendary self-taught drummer broke colour barriers in Toronto clubs in the 1940s.

He also traveled all over the world with various artists, appearing in Birdland, New York, The Blue Note in Chicago, Baker’s Keyboard Lounge in Detroit, festivals in Europe, and tours in Egypt, Nigeria, Scotland, Ireland, Spain, Italy and Brazil.

After an automobile accident in 1967, Archie put his music career on hold and ventured into the world of business. He partnered with entrepreneur, Howard Matthews, and former Toronto Argonauts stars, Dave Mann and John Henry Jackson, to establish the popular Underground Railroad Soul Food Restaurant in Toronto.

Throughout the mid-1980s he became an outspoken activist who vehemently protested the Canada Council exclusion of jazz artists from funding, and successfully led a high profile lobby to ensure Black musicians were represented in the Toronto Jazz Festival.

In 2001, he created the Evolution of Jazz Ensemble (EOJ) to provide mentorship and performance opportunities for young, primarily, African-Canadian students graduating from post-secondary music programs.

At the end of 2011, he received the highest civilian recognition in the country, as a Member of the Order of Canada. He was also awarded the 2015 Harry Jerome Lifetime Achievement Award.

Jackie Richardson, who is one of Canada’s foremost singers of gospel, blues and jazz, had a friendship with Alleyne that dates back many years.

Performing with artists such as the late Ray Charles, Anne Murray and Celine Dion in a recording career spanning more than 35 years, she teamed up with Archie for his final public performance last fall at “An Evening with Jackie Richardson, Black Women Effecting Change.”

“It is truly an honour to pay our respects in music, song and word to an icon, mentor and friend who has left an indelible mark in Black music and history,” she said.

“He raised the bar by breaking down the racial barriers that existed in the Canadian musical scene back then.  The bar has been set high for anyone who aspires to do something great.  Artists, like myself, appreciate his sacrifices and his determination to pursue something he felt so passionate about. What is amazing is that up until the day he passed, he enjoyed and was continuing what he loved doing.”

Stoddart said he had an amazing opportunity to photograph Alleyne for his “LIVE IT WEAR IT” campaign.

“I also was honored to work alongside him and learn from him and his foundation. One thing I can take from Archie’s passing is that I am going to be more of an advocate for prostate cancer awareness. I have lost too many people to this disease. It has really become that taboo conversation and it needs to stop. We all need to get ourselves checked early. Preventative measures and early detection are at least one step we definitely can do, along with emphasizing the importance of doing this and bring awareness to this disease.”

Musician, Michael Shand, described Alleyne as his friend and mentor.

“Always one to not just talk the talk but walk the walk when it came to giving back to our community, it was he, who quite literally opened a door for me to be where I am today in the music scene, by giving me the MD chair in the quintet, Kollage. My heart aches for all his loved ones, beautiful children and grandchildren,” said Shand in a posting on his Facebook page.

Aijia Waithe, the 2013 recipient of a scholarship from the Archie Alleyne Scholarship Fund, says she was blessed to have met him.

“Personally, I was able to develop a bond with Mr. Alleyne. He was a mentor who truly had my best interest at heart when it came to offering his wisdom, teaching from a place of passion in order for him to help me better myself, as a developing musician and young woman. Although his physical presence is no longer with us, I stand knowing and believing that his legacy will NEVER be forgotten and his mantra remains true that ‘without the past, there is no future.’

“Without Mr. Alleyne’s print on Canadian history and the many trials he faced as an African-Canadian, I, myself nor any other budding musician would have the opportunities we are able to embrace today. Although it’s sad that I will never be able to share a laugh with him again, or hear his words of encouragement as he supports in the audience, I find peace in knowing that he is no longer suffering, and am glad for his leading example in my life. Our generation has a responsibility! A legacy to uphold”.

She said his legacy is one of excellence, of love, and one that contributed to the evolution of black musicians in the industry.

“He endured much trial and tribulation to arrive where he was upon passing, but he did not do it in vain. His thoughts were always of others and what was important to him was bettering those who followed in his footsteps as musicians, as cultivators of change and as motivators. His legacy is truly one that inspires.”

The event embodied his fearless spirit and celebrated the songs he loved best.

“He will always be with us,” said his eldest daughter, Tyyra Alleyne. “Archie had a joy for life. He loved living, he loved his family, he loved music and it was truly a great passion for him in every sense. It was important for us to organize this public tribute for his family, friends and fans.”

The launch of his memoir, Colour Me Jazz, which was to be held mid-June at the Paintbox Bistro, has been postponed until further notice.