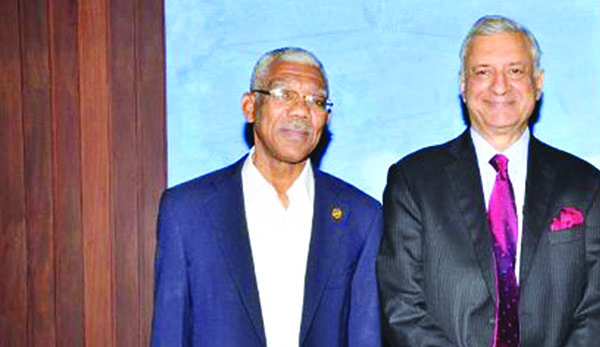 Photo above: President David Granger and Commonwealth Secretary General, Kamalesh Sharma, along with Minister of Social Cohesion, Amna Ally, shortly before the convening of the meeting. Photo credit: GINA.

GEORGETOWN, Guyana CMC — The 53-member states of the Commonwealth have pledged to support Guyana in the ongoing maritime border dispute with Venezuela.

Commonwealth Secretary General, Kamalesh Sharma, sought to assure the government of the groupings commitment on his arrival here on Saturday.

“The Commonwealth stands as one and speaks with one voice in our commitment to Guyana’s sovereignty and territorial integrity. We are an association of 53-member states worldwide accounting for one quarter of the United Nations membership. Commonwealth member governments, individually and collectively are also committed to be peaceful resolution of disputes and to the rule of law,” he said.

Sharma, who met with government officials said, the Commonwealth has “moved swiftly and appropriately in collective solidarity with Guyana”.

The Secretary General has convened a meeting of the Commonwealth Minister Group on Guyana, which is scheduled to meet in New York in September.

The issue has also been placed on the agenda of the Commonwealth Foreign Affairs Ministers meeting that will also be held in New York in September.

At the last Commonwealth Heads of Government Meeting, held in Sri Lanka in 2013, the Commonwealth leaders, “…reaffirmed their unequivocal support for the maintenance and preservation of Guyana’s sovereignty and territorial integrity,” said a statement from Sharma.

Venezuela has recently laid claim to Guyana’s territorial waters, having issued a decree which states that a very large area of the sea belongs to Venezuela and has instructed its navy to enforce the zone.

This claim comes on the heels of news of the discovery of a significant quantity of oil in Guyana’s internationally recognized territorial waters, several weeks ago by Exxon Mobil.

In the wake of the dispute, Guyana also said it would be asking the United Nations Secretary General Ban Ki-Moon to approach the International Court of Justice (ICJ) to review the 1899 Arbitral Tribunal Award and in an effort to settle the 60-year old border controversy.