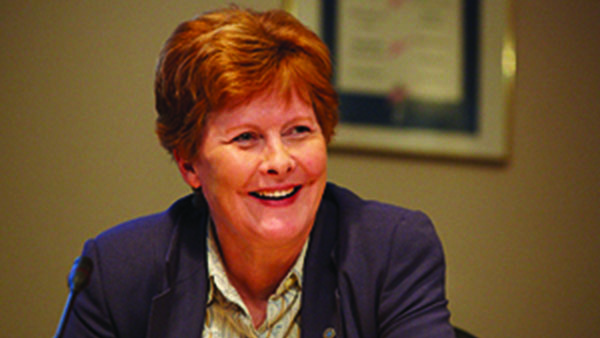 PEEL School Board To Review Report On Anti-Black Racism

Photo above is of Janet McDougald, Chair of the PDSB.

PEEL, Ontario — Starting in early fall, the Peel District School Board (PDSB), one of Canada’s largest public school boards, will review a recently released report on anti-Black racism in the education system.

A report of the review will include “identified gaps in our work that will benefit students of all equity-seeking communities,” says Janet McDougald, Chair of the PDSB.

“It is expected that this gap analysis and report will be completed before the end of December 2015.”

McDougald was responding to the report, VOICES OF ONTARIO BLACK EDUCATORS: An Experiential Report, commissioned by the Ontario Alliance of Black School Educators (ONABSE) and released at its first annual conference in May.

The report finds that systemic anti-Black racism is still entrenched in the education system to the point where it not only hampers the hiring of Black teachers, it also retains significant barriers in the promotion and advancement of Black teachers, and has very serious repercussions within the classrooms.

Based on research conducted by Turner Consulting Group Inc., the report calls on the provincial government to enact employment equity legislation in an effort to combat this persistent problem that is not only affecting teachers but students as well.

Meanwhile, McDougald said the PDSB is reviewing the report in its entirety and in the context of a previous report entitled, “FACES: The Black Community in Peel.”

The F.A.C.E.S. report – Facilitating Access, Change and Equity in Systems — examines the social wellbeing of Black youth in Peel region and the supports needed to ensure the opportunity to thrive.

According to the report, the majority of the Black population in Peel lives in Brampton (60%), followed by 39% in Mississauga, and 1% in Caledon.

The Census of Canada, 2011 indicated that there were 116,225 Black persons living in Peel Region. The Black population in Peel is increasing at a relatively high rate, between 2001 and 2011, it grew by 64%, compared to a 31% growth rate for the Peel population as a whole.

Black youth in Peel reported feelings of isolation and marginalization in the public education system.

“It is our intention to review the reports and the recommendations in order to better understand what programs and interventions are already underway here in the Peel District School Board. Such a review is a standard part of what our equity-focused staff would do when such a report is issued,” said McDougald in a letter.

She said the PDSB is committed to fair and equitable hiring practices and has made available to those responsible for hiring, several resources to ensure that the principles of fairness and equity are evident at all stages of the hiring and promotion processes.

“Over two years ago, we commissioned a full review of our hiring and promotion practices and, in a report entitled, ‘The Journey Ahead,” we made recommendations to the Board that created an action plan containing 33 findings with over 90 specific actions.”

She said work that is related the action plan has been reported to the Board on a regular basis throughout the past two years.

“Part of this action plan has involved a combination of mandatory bias-free training for those responsible for hiring and promotion and optional professional development seminars on inclusion awareness, which has helped to ensure that our staff are critically and continually engaged in promoting equity and inclusion.”

In November, the PDSB will be conducting a Workforce Census which will provide self-identification information on the various identities reflected by its employees.

McDouglad said the Board’s commitment to equity and inclusion is reflected in its human rights policy which addresses harassment and discrimination on the basis of any of the enumerated grounds in the Ontario Human Rights Code.

A key finding from the VOICES research is that all teachers and education staff should receive training to increase their ability to effectively educate Black students.

This includes increasing staff understanding and awareness of racism, racialization, and racial profiling and how they affect the success of Black students.

However, McDougald said training is geared to all equity-seeking people and is not specific to Black students.

“The Peel District School Board has a rich history of equity and inclusion training, and programs such as The Future We Want, Manifesting Equitable and Respectful Environments, Teaching for Diversity and Social Justice, to name only a few, provide training to our employees which increase their understanding and awareness of equity issues,” she said.

Among the report’s findings is that while racialized people represent 26% of Ontario’s population, they make up only 10% of the province’s 70,520 secondary school teachers, and 9% of the 117,905 elementary and kindergarten teachers.

The report calls for changed staffing models, noting the connection of Black educator to the academic success of Black students.

The report said it is critical that school boards not only increase the number of Black educators within the system as a whole, but specifically in schools with a significant number of Black students.

“While we are fully committed to ensuring that all PDSB staff are well trained in the areas of equity and inclusion, there are currently no plans to target any colour or ethnicity in our hiring practices,” said the PDSB Chair.

The VOICES report notes that, “the redaction of African Canadians from the curriculum and classrooms continues to be a concern for both Black educators and students,” and that “school boards can do more to help Black parents understand the Ontario public education system and support their children’s education.”

According to the F.A.C.E.S. report, there is an issue with “the relative absence of Blacks and Black culture in the curriculum in a positive manner.”

Regarding addressing this matter, McDougald said, “This question will be considered as we engage in our gap analysis beginning in the fall of 2015.”

Reacting to the VOICES report, Liz Sandals, Ontario’s Minister of Education said the government believes a safe, inclusive and accepting learning environment is essential for our students’ success and wellbeing.

“It is important to us that all students, parents, teachers and members of the community feel welcomed, safe, and respected within their school community.”

Sandals said the Ministry of Education continues to support school boards in addressing bullying and victimization through prevention, intervention and supports.

Minister Sandals said educators play a critical role in building and sustaining a positive school climate and “there is absolutely no place for discrimination or harassment in our school system.”