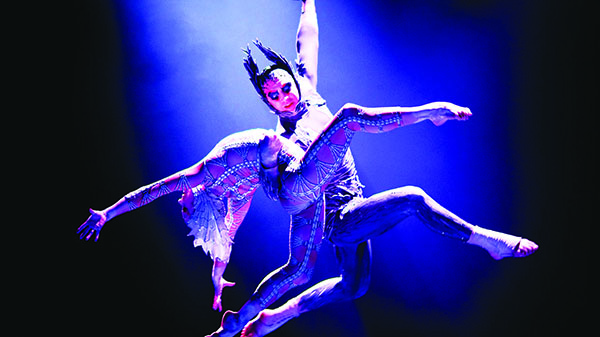 Toronto Set To Host Games And Cultural Showcase Of The Americas

Photo above is of performers of Cirque du Soleil performing their spectacular routine.

There are more than 30 competition venues across Ontario for the TORONTO 2015 Pan Am/Parapan Am Games.

“The TTC wants to keep you moving during the Games. As Toronto hosts the Games, consider changing your travel routine. Travel off-peak hours, if possible. Plan for some stations to be busier than normal. Have your fare ready to move through lines quickly,” declares the poster on the subway train,” it advises.

While the competitions are happening across the province, visitors and residents will have a chance to check out PANAMANIA, the 35-day arts and culture festival to enrich the Games experience, sponsored by CIBC.

More than 250 unique performances and exhibitions, both free and ticketed, will take place across Toronto from July 10 to August 15.

PANAMANIA will showcase the diverse cultures and artistic excellence of Ontario, Canada and the Americas through music, theatre, dance, visual arts and fashion.

There will be 40 national and international performances and exhibitions, including 28 commissioned world premieres at more than 20 locations across Toronto.

World-class athletes and fans will be at the nightly Victory Celebrations that are part of PANAMANIA Live @ Nathan Phillips Square from July 11 – 25 for the Pan Am and August 8-12 during the Parapan Am.

There will also be free performances at PANAMANIA Live @ The Distillery District and at the CIBC Pan Am Park.

CIBC Pan Am Park encompasses several different sites and venues located along the shores of Lake Ontario, including the historic Exhibition Centre and Toronto Coliseum, the waterfront wonder that is Ontario Place West Channel, the open-air Exhibition Stadium and the temporary venue only available for the Games — the Chevrolet Beach Volleyball Centre.

The Park hosts 16 sports at these five competition venues, making it the largest sport cluster at the TORONTO 2015 Games.

World Premiere of The Postman by Appledore Productions

Staged from selected porches on Brunswick Avenue, Major Street, and Palmerston Boulevard, with additional performances at Margaret Fairley Park. Ticket holders will receive an email on the performance day informing them of the audience meeting point for each particular show.

In an interview, Dora winner David Ferry of Appledore Productions, co-creator and project director of the play, said he was reading an article in the Toronto Star about the naming of Albert Jackson Lane a couple years ago.

It included a picture of one of the houses that Jackson owned on Brunswick Avenue, now owned by publisher, Patrick Crean, who was on the porch with two descendants of Jackson.

“I was so intrigued by the heroism of Mrs. Jackson and the bravery and honour of Albert in his fight against racism in Toronto to get his job, and the added twist of John A. McDonald being involved in the story. But then the picture of the porch really made something go boom in my head,” said Ferry, who told his colleague and actor, Laurence Dean Ifill, that it could be a really great theatre project to tell the family’s story.

He wanted it to be done on the porches where Jackson used to deliver the mail, including the one in the photograph that now has a plaque about Jackson.

“I think it’s a very empowering story. When David first told me about it I was surprised that I hadn’t heard this story before. It just seemed like, to me, such an important story of Canada’s national fabric,” said Ifill who plays Albert Jackson.

Karen Glave, who plays Mrs. Anne Maria Jackson, describes her as a courageous woman who had to find her own inner strength and resources to save her seven remaining children.

After her husband, John, died from, presumably, a broken heart caused by the sale of his two eldest children, she decides to escape the plantation for freedom.

(July 16, 7:30pm) Celebrate the flair of the Caribbean and its people in this series of contemporary fashion events. The elegance and sophistication of “island-chic” will come alive on the runway in this cultural celebration by Joan Pierre & Associates.

World Premiere of Obeah Opera by Nicole Brooks at the Young Centre for the Performing Arts at the Distillery District.

(August 4 – 8) Obeah Opera is a hand clapping, foot-stomping, spirit-lifting, musical sensation. Steeped in black music and sung entirely a cappella by a powerful all-female cast, Obeah Opera is a retelling of the legendary Salem witch trials from the fascinating perspective of Caribbean slave women. | Produced by Culchahworks Arts Collective in association with Nightwood Theatre and b current. Tickets start from $20.15.

Born in Gonaives, Haiti, Michel’s first experience in music was singing gospel in a choir at her local church there and then in Port-au-Prince.

After completing her education, she accepted an opportunity to study at the Detroit Jazz Centre and returned to Haiti as a professional musician.

Speaking on the phone from New York where she now lives, having resided in France and Montreal, Michel says her performance will be organic.

“When an audience is there I don’t apply a formula, I tend to really be very open to who’s there, inviting them to not only discover the beauty of that music but also for them to be a part of it. A lot of the songs we lined up are mainly directed to really get everyone together, not like only impose or stuff, get everyone to share a moment of joy. This is what’s in the menu so far,” she says laughing.

In her song, “Nasyon Soley” (Sun Nation), she talks about Haitians carrying the flag under their skin and that “wherever you go your flag is yourself.”

The Opening Ceremony of the TORONTO 2015 Pan Am Games will be held on July 10 at the Rogers Centre featuring Canada’s internationally-renowned Cirque du Soleil, the Parade of Nations, and the lighting of the Games cauldron.

The Closing Ceremony on July 26, will feature music organized by Live Nation Entertainment and will include top Canadian and international musical acts. It will honour outstanding Games performances and the contributions of all Games partners, while handing the baton to Lima, Peru, the Host City of the 2019 Pan American Games.

Meanwhile, on August 7, the Opening Ceremony of the largest Parapan American Games ever will be held at the CIBC Pan Am/Parapan Am Athletics Stadium at York University in Toronto.

The entire schedule of PANAMANIA can be seen at www.toronto2015.org/panamania.