New in Pride
Home / Sports / Black Canadians In Sport: Connecting The Dots From Past To Present 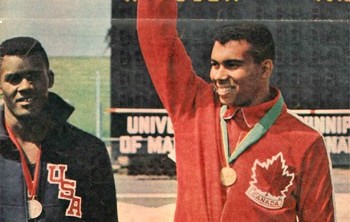 Black Canadians In Sport: Connecting The Dots From Past To Present

Photo above is of Harry Jerome receiving the Gold Medal for the 100m win (10.2 sec) at the 1967 Pan-Am Games in Winnipeg. Photo credit: HarryJerome.com.

While I watched the Opening Ceremony of the Toronto 2015 Pan Am Games, which aired on CBC, the broadcast showcased a number of iconic Canadian athletes.

One of those athletes was Harry Jerome. In the past three years, I have had a few casual conversations with other black Canadians and somehow the flow of our chatter resulted in me talking about Harry Jerome. Yet, whenever I asked others if they have ever heard of him, the overwhelming response was “no”.

I should not pass judgement on anyone who has never heard of Mr. Jerome, as I myself did not know anything about him until about three years ago.  It was not until I got the opportunity to volunteer as the Social Media Specialist for the 33nd Annual Harry Jerome Awards — organized by the Black Business and Professional Association (BBPA) to celebrate excellence and the achievements of African-Canadians — that I began to know and understand the legacy of one of Canada’s historical athletes.

It is with this in mind that I want to shed light on an exhibition which took place last month and aimed “to celebrate the excellence and success of Black Canadians in sports,” as explained on the Ontario Black History Society (OBHS) website. This showcase displayed an array of Black Canadian athletes from years past, and also the current carriers of the torch.

The importance of such an exhibition cannot be overstated especially considering that a majority of young black Canadians tend to know more about African-American sports icons, past and present. A lot of black Canadians in my generation have heard of iconic black American athletes such as Tommie Smith and John Carlos, Jackie Robinson, Hank Aaron, Althea Gibson, and of course, Jesse Owens.

So why is an accomplished Canadian icon mostly unknown across this country in general, and most shamefully, unknown to many black Canadians?

Who is Harry Jerome?

Well, in a nutshell, he was Donovan Bailey before Donovan Bailey existed. The moniker of the ‘world’s fastest man’ once belonged to Jerome. He represented Canada at the 1960, 1964 and 1968 Olympic Games (he won a bronze medal at the ’64 Olympics).

He was a gold medalist at both the 1966 Commonwealth Games and the 1967 Pan Am Games. His fastest ‘unrecorded’ time was at the Canadian Olympic trials in 1960 – this time was contested and not believed due to the fact that all races where hand timed until 1972, and track governing officials refused to believe he had run the 100m in 9.90 seconds. They rounded out his results to 10.00 seconds.

It is because of black Canadian athletes such as Harry Jerome, that the OBHS Black Canadians in Sports exhibition was a great opportunity for us to learn about athletes, past and present, from the black diaspora.

The exhibition was held at the Metro Toronto Convention Centre, North Building from June 26th to 27th. It should be noted that the OBHS is a proud partner of TO2015 IGNITE and the exhibit itself is “sponsored by the Department of Canadian Heritage and aims to showcase Canadian values, culture and identity as well as promote pan-Canadian participation in the 2015 Games.”

This exhibition reminded us that there should be a place for us to highlight the accomplishments of black athletes – although in this day and age of the 24 hour news cycle, any record breaking accomplishment by any Canadian athlete, is covered and reported through sports news networks, and is shared through the plethora of social media platforms. This should not, and does not, detract from the necessity of creating more showcases like this one.

In the spirit of the Pan Am Games, this showcase of Black Canadians in Sports highlighted the past of black athletes in this country, and thus illustrated the passing of the torch to ones competing on the tracks, fields, courts and ice of today.

We should always strive to know more about those who accomplished feats before our time; for those in our communities who had the honour and privilege of attending the exhibition, the overwhelming sentiment would most likely be, that they were able to connect the dots regarding black Canadian athletes – from Harry Jerome to Donovan Bailey, to Bruny Surin and Andre De Grasse.

Let us hope that more of the history of black Canadians in sports become well known to most in this country, and especially to us in the African Canadian and Caribbean communities.