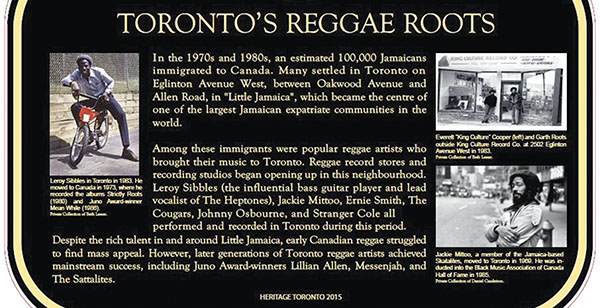 TORONTO, Ontario — Anyone walking along Eglinton Avenue West and Oakwood Avenue, in the heart of “Little Jamaica” in Toronto, will be soon be able to read about Reggae Lane on a Heritage Toronto plaque.

Another street sign for the lane will also be installed right on Eglinton Avenue West.
Toronto city councillor, Josh Colle, whose idea it was to name something to celebrate Reggae’s history in the area says things have been snowballing and led to other initiatives, which are all being coordinated for the launch.

“There’s going to be a mural fest by a group called STEPS Initiative and our local artist at the laneway that will hopefully reflect a lot of that history. We have also received approval for a Heritage Toronto plaque that will be installed right on Eglinton, another reminder, kind of a little bit of history lesson for those people just walking by who might not know the significance of some of the area’s history.”

The STEPS Initiative is an award winning public arts organization that builds the capacity of citizens to take action in creating more vibrant and connected communities through what it calls public space ARTivism.

Located at 1529 Eglinton Avenue, facing the Green P Parking lot, the completed mural will be an over 1200 square foot new work that reflects the rich culture of the neighbourhood.

“As the word gets out, we find out that the Toronto Public Library is really intrigued by it and has started to create a bit of a history project around cobbling together as many interviews and books, records, articles they can about that area and the area’s history,” says Councillor Colle.
They are also looking at honouring some of the Reggae pioneers with something like a Toronto Reggae Hall of Fame – a final name for it hasn’t been decided yet.

Councillor Colle said the lane itself was never intended to be the focus of his idea.
He said city council has run out of things to name in this city. “We don’t have new streets and we know a dozen lanes around this city that have been named and it doesn’t necessarily reflect what happens in the lane.”

He said the laneway has its challenges like any laneway does, what they are trying to do, above and beyond commemorating the Reggae history of Toronto, is also just cleaning up that lane.
That requires businesses to get on board and according to Councillor Colle, some are and some aren’t.

“The city can do their part but we’re also trying to bring some services back to Eglinton, especially during this real transition phase with the construction right now and so we’ve got a push for the city health services that will be coming, a community hub on Oakwood, and well sort of launching with us and other units in the area some supports just to kind of help out some people in and around the streets, in the lane itself.” He says it’s a kind of work in progress to clean up the lane too.

Councillor Colle has secured funding for the plaque, the naming, and the mural.

Regarding the work on the area, in general, he said some of it is just happening because of the subway coming, like the development at Oakwood and Eglinton that wouldn’t have been there without the subway.

While he has gained funding for certain projects to address some ongoing and persistent issues, there are still others that he will continue to push for more.

“That’s really one of the reasons why I’ve really worked hard to get the Oakwood station included in the Crosstown but also to get this community hub established on Oakwood which is now coming, and we’ll have an arts centre and community health centre in the neighbourhood that hasn’t been there in something like 30 or 40 years.”

The hub will be close to Oakwood and Vaughn but the organizations will serve a much wider community.
Nia Centre for the Arts will be there and their focus will be on youth and the arts, and also on the African and Caribbean Canadian communities. The health centre has been an identified need in the area as long as the councillor has lived there.

They will be the two main anchor tenants of that space on Oakwood and I think there’ll be a real positive reception and service in the neighbourhood, Colle said.
There are also growing business development interests and a new Montessori school and a dance centre on Oakwood.

“Eglinton is in transition. As much as I’ve done this Reggae Lane project to capture some of this history so its not lost because I just know that when we look back in ten years Eglinton will look very different. There is also still a lot of work to do as we transition to make sure that the people who need assistance and business will get. That’s something that we’re always working on.”

Meanwhile, the York Eglinton Business Improvement Area will hold its International Street Festival on August 15 and 16.