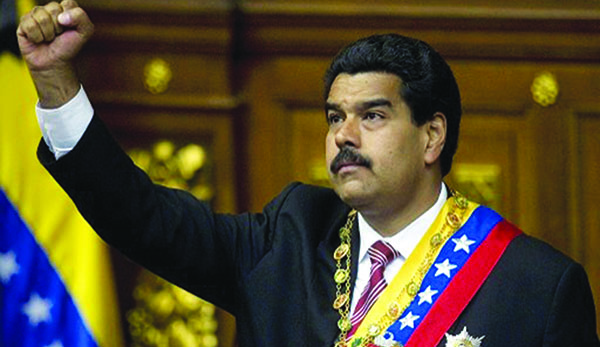 UNITED NATIONS, New York, CMC – Venezuelan President Nicolas Maduro said, on Tuesday, that a United Nations mission will visit his country and Guyana in a bid to encourage dialogue and deal with the centuries old border dispute between the two countries.

Maduro, who met with UN Secretary General Ban Ki-moon, said, the top UN official gave an undertaking to “immediately activate a commission” to visit both countries.

Venezuela has asked Ban to name someone whose “good offices” could be used to try to resolve the dispute over the Essequibo territory, which encompasses two thirds of Guyana.

Maduro also said Ban had pledged to try to arrange a meeting between the leaders of the two countries on the sidelines of the UN General Assembly in September.

Earlier this month, Maduro accused the newly elected Guyana President Donald Granger of disregarding the history surrounding the border dispute between the two countries and seeking to provoke and isolate his oil-rich country.

Last Friday, as he addressed delegates at the William Perry Center of Hemispheric Defense Studies in the United States, Granger, a retired Brigadier in his country’s army, warned that the border dispute had the potential to destabilise the rest of the region if it is not dealt with quickly.

“Guyana at the moment is facing a challenge to its survival by a larger state,” he said, warning that the conflict could spill over to the rest of the region if not dealt with quickly.

Caracas has said it has withdrawn the controversial decree regarding the border dispute with the two countries and recalled its ambassador there and ordered Foreign Affairs Minister Delcy Rodriguez to comprehensively review diplomatic relation with Guyana.

While Caracas is reported to have withdrawn the May 26 decree that includes all the Atlantic waters off the Essequibo Coast, it has since replaced it with a new one which is to support and justify the actions of the Bolivarian National Armed Force in defending the newly created Integrated Defense Maritime Zones.

The May 26 decree had included all the Atlantic waters off the Essequibo Coast and the purported annexation of the waters off Essequibo now takes in the oil-rich Stabroek Block, where American oil giant Exxon Mobil in May found a “significant” reserve of high quality crude oil.

ExxonMobil said the discovery was made in one of the two wells it dug, in the Liza-1 drill site, which realised more than 295 feet of high-quality oil-bearing sandstone. Venezuela has demanded that Guyana halt the oil exploration.

Maduro has criticised Granger for engaging in an “aggressive provocation.”

“Sooner or later he will have to rectify a position that hurts the very people of Guyana,” said Maduro.