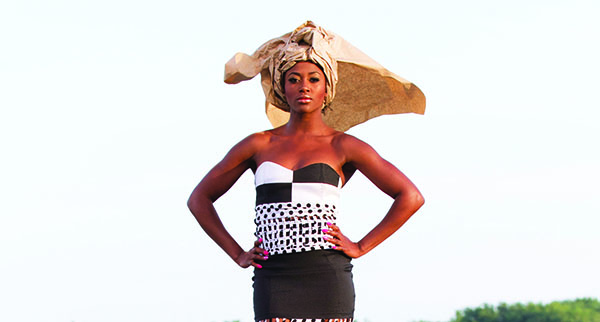 TORONTO, Ontario – With summer temperatures mimicking the heat of excitement that was the Toronto 2015 Pan Am and ParaPan-Am Games, which ended last Saturday, residents and visitors to the mega-city that is Toronto, will not soon forget their experiences. 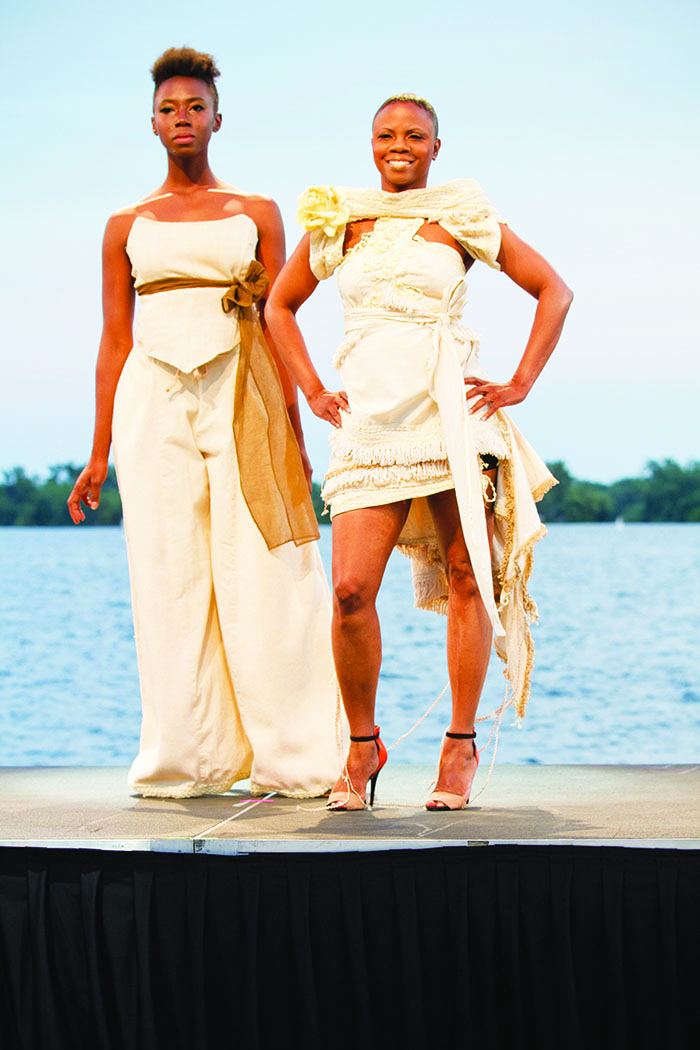 Medals, disappointments, applause, laughter, tears and shouts of excited jubilation were the music and decorations of not only the athletic events, but also PANAMANIA.

Presented by CIBC, the 35-day arts and culture festival was designed to enrich the TORONTO 2015 Pan Am/Parapan Am Games experience. More than 250 performances and exhibitions, took place across the city, leaving audiences appreciative of the multicultural tapestry that is Toronto.

PANAMANIA showcased the diverse cultures and artistic excellence of Ontario, Canada and the Americas through music, theatre, dance, visual arts and fashion.

Event Planner extraordinaire Joan Pierre, whose stewardship of cultural events in Toronto has proven itself trustworthy and solid, pulled it off again. With her team of diehard Caribbeanists and proactive cultural activists, noteworthy of which is Production Manager, Nicole Waldron, Pierre delivered a high calibre production, which certainly added to the landscape of hallmark creative endeavours at the 2015 Pan Am Games.

Pierre echoes the sentiment of her creative director, a man who has been dubbed a “fashion evangelist” by the leading lifestyle magazine of the region, SHE Caribbean magazine, when he proclaims, “There is indeed a Caribbean aesthetic, to which all the imagers, designers and creatives subscribe, validating its influence so resplendently through the multifaceted interpretation of its ethos.” The packed ballroom witnessed a tapestry of alternative silhouettes, textures, hues and designs, energized by exotic musical vibes from the multidimensional spectrum of genres of the region. 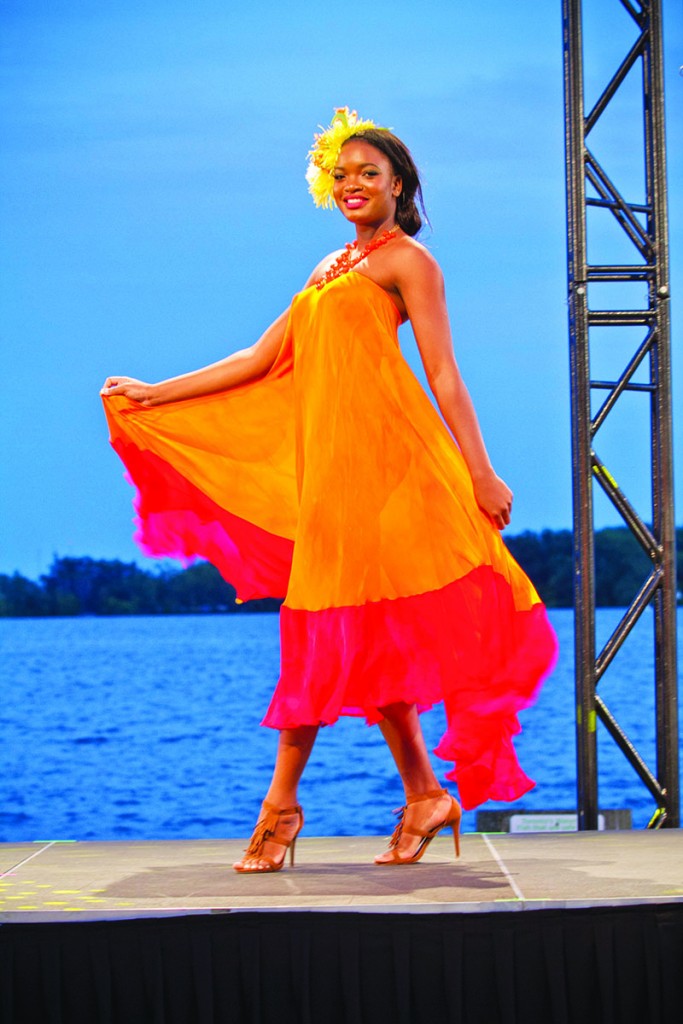 The theatrical splendour at the Metropolitan Ballroom was prefaced by the spectacular imagery styled on the waterfront at HTO Park, two days prior. Torontonians, in addition to the eclectic array of Pan Am onlookers, beheld resort style in its Caribbean magnificence, thrown into sharp relief against the waterfront, on the one hand, and the remarkable Toronto skyline, on the other.

The vibrant colours of the brands, The Cloth and that of Zadd and Eastman, both from Trinidad and Tobago, enlivened the waterfront and demonstrated opposite ends of the continuum of Caribbean design application, presenting a “paradise people” resort look. The Cloth with their idiosyncratic Picassoesque applique technique accented with bold tropical floral prints in breathing textiles, and Zadd and Eastman’s hand-dyed silks in kaleidoscopic blends in cool, caressing silhouettes wafting in the waterfront breeze.

Dominic Hutch emblazoned the ‘fashion by the water’ showcase with his resort wear boasting of ethnic print shorts, complemented with retro-tribal beads, testifying to a New World Viking, sunglasses and flip-flop, to boot. His sirens, in tow vamped in daring swimwear, as an accolade to the bravura of a Caribbean bombshell. Calvin Southwell of Antigua and Barbuda focussed on the swagger of the Caribbean male trendsetter, strutting with an air of inimitable confidence, in silks and linens, yet integrating a global perspective to his silhouette. His women sashayed with an ease and a “cuttin’ style” edge, proclaiming a ready-to-take-on-the-world confidence.

There were two recipients of the most prestigious award for fashion in the region, the Grand master of Fashion, presented by Caribbean Fashion week, in Kingston, Jamaica, Claudia Pegus – Claudia Pegus Designs and Robert Young – The Cloth.

Claudia Pegus is literally the Grande Dame of fashion in the region. Her signature couture has been a trailblazing brand for decades. She is a virtuoso in branding her luminous, lush, luxurious silhouettes, textured in luxuriant fabrics with intricate features of haute couture artistry. Her fashion story was a distilled composition in exclusive silks, masterful embroidery, arresting silhouettes, with a languid Caribbean panache that screams DIVA!

A new guard of on-the-cusp designers demonstrated their on-trend capturing of international flair and Caribbean verve. Rhion Romany is a young designer who specializes in a sophisticated modern take to swimsuit resort wear. He outfits the new lifestyle choices of the athletic, the calisthenic, the poseur and the absolute fashionista. Adding an enchanting sheer throw-over, be it a billowing pareo, or simply a decidedly making-an-entrance textile accessory, Rhion testified to an amazing body gossip story rendered by his incredible high fashion swimwear. 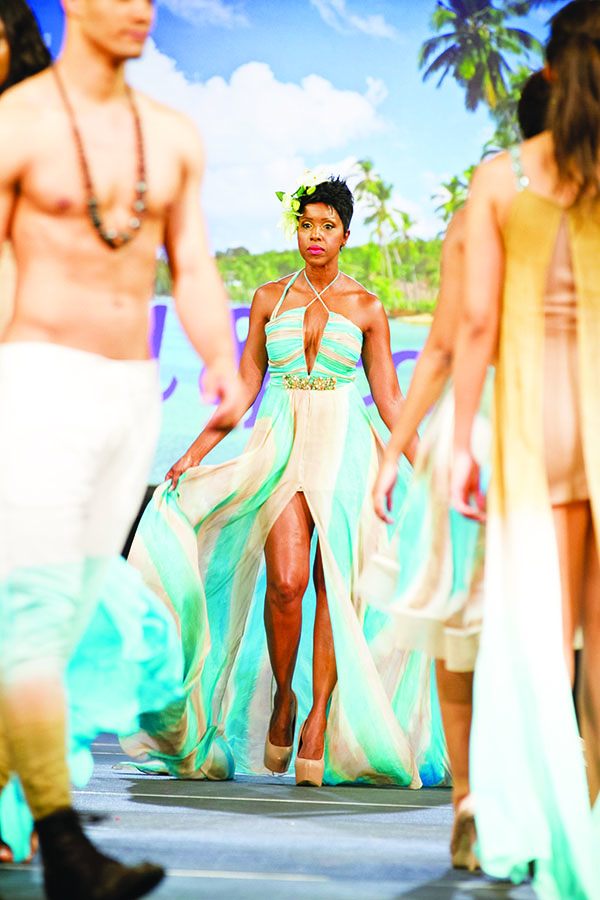 Another two designers of immeasurable talent were Noreen Phillips and Shaun Griffith Perez. The Vincentian born Antigua-based Phillips, who  prides herself in being part Carnival, part Park Avenue, believes in drop-dead glamour, at all costs. Her fuller figure designs in personalized fabrics, milled to her design template specifics, celebrate the majesty in all. She boasts of highly accessorized looks with timeless detail, which are destined to remain seamless in place and time. Shaun Griffith Perez consistently re-tunes the nuances of island elegance to capture novel experiences within our plural fashion mosaic. These interpretations are unashamedly Caribbean, positing a refined upgraded, outstandingly impeccable of-the-islands feel.

Designers par-excellence and celebrity models melded to create an unforgettable experience, it is of no surprise that the accolades for Cuttin’ Style Caribbean continue to flow.

Founder of the How She Hustles organization, Emily Mills, commented, “As an event planner myself, I must say: Hands down, this event has been five-star! Joan Pierre, you inspire me so! The food, the fashion, the accessories, the models, the entertainment, the decor, the audience, the vibe. She went on to say that, “Pan Am Games and Panamania got this one right!”

Kike-Lola Odusanya, a member of “How She Hustles” shared that as a child, her father took her to the Ebony – Fashion Fair Fashion Shows. “Last night as I watched the Cuttin’ Style Caribbean Fashion Show it brought me back, back to a time when things were not rushed, carefully planned, super classy and done with pride.” Praising Joan Pierre and Associates for completely outdoing themselves, Kike-Lola’s comments suggested that a Cuttin’ Style Caribbean filled a much-needed void. “Never before have I seen a fashion show of that calibre done within the Caribbean Community held in Toronto!” Excited, she continued, “Everything was ‘just’ perfection… the venue, the ambiance, the fashion, oh and not mention the food. I know everyone present thoroughly enjoyed themselves. I was completely blown away, I know the countless hours and thought that must have went into putting on such an incredible event of that magnitude. No detail was left to chance. It was amazing from start to finish.” Herself an entrepreneur, Odusanya applauded Joan Pierre. “Having an idea is one thing but executing the way you did last night is something else,” she said. 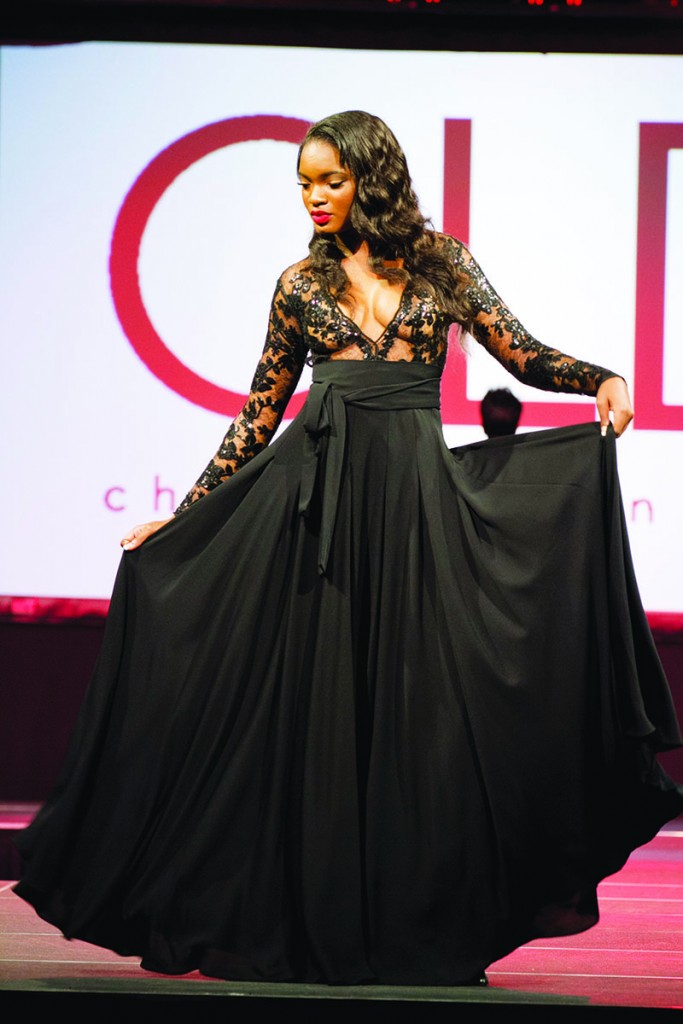 Noted social advocate and politician— the first African-Canadian woman elected to the Parliament of Canada—Jean Augustine, sent Pierre a personal note about her experience of the show.

“Thank you for the opportunity to enjoy a wonderful evening of “cuttin style”. Not only did I enjoy the models and the creative genius(es) coming from T&T but also the very Professional atmosphere.”

The Grenadian native also lauded the attention to detail evident in the show, making it, “a very special event.”

“Notice that I was among the last to leave as I was enjoying the camaraderie with old friends and the exchange with some young beautiful people,” she continued.

Cuttin’ Style Caribbean created not only a venue to observe and enjoy a wide range of Caribbean fashion, from Resort to Haute Caribe—it was a celebration of different Caribbean aesthetic elements that excited the palette, the aural and visual senses.

Those in attendance and those hearing about the pageantry of Cuttin’ Style Caribbean all agree on the reality that the show must be repeated—and be expanded.