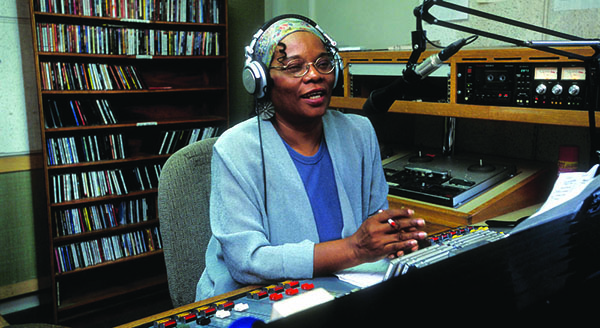 Rose Willock on her Saturday morning Radio Montserrat show. Rose played a vital role in informing the population during the volcano crisis. Thousands were evacuated from their homes in the south of the island after it was abandoned after the 1995 and 1997 eruption of the Soufriere Hills volcano. The southern area which contained most of the farm land is still out of bounds to everyone except scientists. Photo©Steve Forrest/Workers Photos

Photo above is of Montserratian, Rose Willock.

Holder, who died in January last year, was recognized as being instrumental to the birth of the region’s first ever television news exchange, “Caribvision” as well as the regional television magazine, “Caribscope”.

Willock, a fomer manager of the now defunct Radio Antilles in Montserrat, was recognised for her service to the region, especially in building capacity for emergency broadcasting.

Editor Emeritus of the Barbados Nation Newspaper, Harold Hoyte noted that Willock’s career had been marked by her time as Head of the English Service of Radio Antilles in the aftermath of the devastation by Hurricane Hugo in 1989, as well as her recognition on the Queen’s honours lists in 1986 and 1996 with an MBE and an OBE respectively.

“These latest additions to the CBU Hall of Fame bring the total number of awardees to fourteen,” the CBU said in a brief statement.