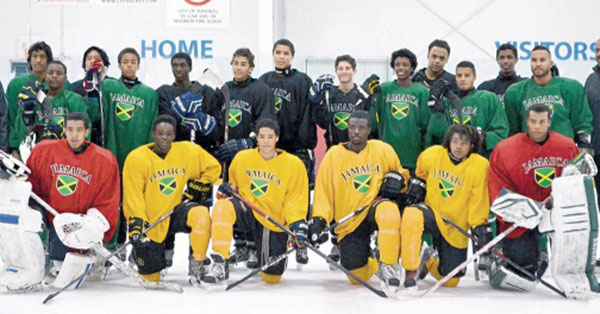 Canada is a country with a deep love for hockey. I remember how much hockey content used to drown out most other sports on the television back in the early 90’s. The sport was viewed by many immigrants and their children as a way to speed up their sense of belonging. Being a true Canadian meant, to some, being a hockey fan.

For Graeme Townshend, the hockey influence had a lasting effect as he eventually went on to become the first Jamaican-born player to play in the NHL. Townshend was born in Kingston, Jamaica and moved to Canada when he was almost three years old – it is safe to conclude that hockey had a strong influence on him as his overall hockey career spanned 10 years.

A few years ago, Townshend was asked if he would like to be the head coach of a Jamaican hockey team. His answer was a resounding yes – the team now holds the distinction of being the first Caribbean nation to become associate members of the International Ice Hockey Federation (IIHF).

In some ways, the accomplishment of a team comprised of Jamaican players has some similarities to the well-known bobsleigh story from Jamaica.

Let us take a trip down memory lane to the 1988 Winter Olympic Games in Calgary, Alberta – when a group of Jamaican athletes decided they could compete in a winter sport. We all know the story of these men – Devon Harris, Dudley Stokes (who was eventually replaced by Chris Stokes), Michael White, Freddy Powell, and Howard Siler.

Most people automatically think of the movie, “Cool Runnings”, which featured the late great John Candy, along with Leon Robinson, Malik Yoba, Doug E. Doug and Rawle D. Lewis, when the words Jamaica and ice are concerned.

Sometimes we forget how much the real Jamaican bobsleigh team helped to change the image of black and Caribbean athletes – as professionals who could compete beyond track and field, cricket, a soccer pitch or a basketball court.

What cannot be lost in translation is that fact that Jamaica has had representation in bobsleigh at in 1992, 1994, 1998, 2002, and 2014 Winter Olympics. Which makes one realize that the concept of ice-sports is becoming increasingly well-matched with Jamaica.

Hockey players of Jamaican heritage are on the rise and these U-16 players who make up the Jamaican hockey team will continue to develop their skills and will one day represent the island country at a Winter Olympic Games; certainly, their goal is to qualify for the 2018 Games.

The kids in the U-16 Jamaican hockey team might not be able to relate to the original bobsleigh team from 1988 but they sure can connect, in some way or another, with current NHL players of Jamaican ancestry; here are a few of them: P.K Subban, Trevor Daley, Nigel Dawes, and Mark Fraser.

These players were born in Canada and thus their country of representation at any international competition is most likely Canada – this is what makes U-16 Jamaican hockey team even more special. They get to fulfill Townshend’s dream of one day bringing to fruition a Jamaican hockey team competing at the Olympics.

In an interview with Sportsnet.ca, Townshend reminisced and elaborated on his Olympic dreams for Jamaica:

“I used to joke around with my teammates, during Olympic time, that the only chance that I would ever have playing in the Olympics is if Jamaica had a hockey team…and since I was the only Jamaican, then I would be the head coach, equipment manager, I’d play the first power-play unit, I’d be killing every penalty, maybe even playing goal… it was funny back then and when I was approached with this three and a half-four years ago… I couldn’t believe it. It was a dream come true.”

Being named as the head coach is definitely a good start to his dreams coming true. The next phase is to keep developing the members of the current team as Jamaica works towards making that Olympic dream a reality.

Townshend and the Jamaican Olympic Ice Hockey Federation (JOIHF) – www.joiht.org – are working towards starting a youth hockey program which will build on the success and history making achievement of Jamaican hockey team.