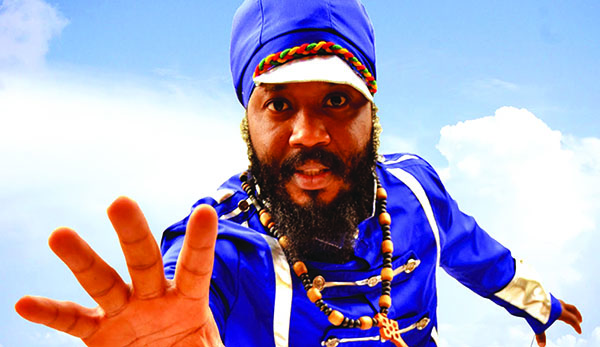 Photo above: Warrior King was recognized, in August 2010, by the United Negro Improvement Association (UNIA) Marcus Garvey Awards for his contribution to music.

Jamaica’s Artist of the Year in 1975 and 1976, Johnny Clarke, and Warrior King, a devout follower of the Rastafarian faith — who uses his music to reinforce messages about love, tolerance, education and upliftment — are the headliners for this year’s Rastafest Music Festival.

Presented by the Upfront Theatre Foundation, the ever-popular music festival will be overflowing with the enchanting and seductive sounds of the Rastafarian culture, on Saturday, August 22, at the Downsview Park, 35 Carl Hall Road (Keele Street and Sheppard Avenue, West).

In addition to expected spectacular performances by Clarke and King, will be a host of popular artistes, including Blakka Ellis, Jawara Ellis, Carol Brown, Lenn Hammond, Rasana11, Ishacure, Schulleby, Kandice KASH, and the Bobo Shanti Drummers, from Jamaica.

Clarke grew up in the Kingston ghetto of Whitfield Town and attended Kingston College. In 1971, he won a talent contest in Bull Bay; his prize: a meeting with producer Clancy Eccles, with whom he recorded his first song, “God Made the Sea and the Sun”, the following year. The single didn’t sell well, and disappointed with the lack of promotion from Eccles, he moved on to Rupie Edwards, who produced Clarke’s first hits in 1973, with “Everyday Wondering” and “Julie”.

In 1974, Clarke moved on again, recording “Jump Back Baby” for Glen Brown, before beginning a long association with Bunny Lee and his band, The Aggrovators, in 1974. “None Shall Escape the Judgement” was an immediate success and became the title track on Clarke’s debut album.

Clarke became one of the most popular singers on the island of Jamaica, mixing original songs with covers of popular reggae songs by other artists, and mixing roots and lovers-themed material.

Many of Clarke’s songs concern his faith as a Rasta and the beliefs of the Rastafari movement, including anti-violence (as on “Let Go Violence”) and legalization of marijuana (“Legalize It”).

He helped define the “Flying Cymbals” period that preceded the “Roots Rockers” sound of the mid- to late 1970s, and was one of the first Jamaican artists signed to Virgin Records’ Frontline subsidiary in 1976, releasing the albums Authorized Version and Rockers Time Now on the label.

He enjoyed further hits in the early 1980s with producer, S Douglas, before working again with Lee. His popularity in Jamaica, however, declined, and he relocated to London in 1983, recording with Mad Professor, as well as further recordings for Jamaican producers King Tubby, Errol Thompson, and Prince Jammy.

He has since occasionally reappeared with new material — Rasta Nuh Fear in 1992, and Rock With Me in 1997 — and continues to tour regularly. His song “None Shall Escape the Judgement” was featured on the Trojan roots compilations.

Clarke is known for his so-called “African Roots” or knee-length dreadlocks, which, when performing live, he frequently conceals inside a large hat. At the climax of his concert, he removes his hat, revealing his “African Roots” to the audience.

He set up his own Hit Machine label, his first album on the label being Jamaica 50 Johnny Clarke Sing Then Dub Them, released in 2012 to coincide with the 50th anniversary of Jamaican independence.

Warrior King, aka Mark Dyer, was born in Kingston, Jamaica on July 27, in 1979. He is a reggae singer, known within the Caribbean, and internationally, for his music that is focused on messages about education and uplifting women.

His musical career began in high school where he performed in talent shows. At that time, he followed the musical style of reggae artiste, Bounty Killer..

Over time, his style evolved, eventually leading to his international chart-topping single, Virtuous Woman, in 2001 (produced by Michael Johnson).

In October 2001, this song was # 1 on the Jamaican reggae charts, as well as, the New York Top 30 Reggae Singles chart. In 2002, his debut album, Virtuous Woman was released by VP Records and spent nine weeks on the Billboard.com charts.

This album included the songs Hold Da Faith and Breath of Fresh Air. In 2005, he released another album called Hold Da Faith whose songs were on the charts for Jamaica’s Weekly Countdown and included singles such as My Life, Baby Girl,  Education and Can’t Get Me Down.  His music became known, not only in his native Jamaica, but also Tokyo, London and New York.

His 2009 album, Love is in the Air, featured the hit, “Wanna Give You Love”, which spent two weeks at the top of the Jamaica Music Countdown Top 25 Reggae Singles Chart.

In September 2011, he released a new album called Tell me how me Sound featuring songs such as Jah is the Only One and System is Crazy.

In 2001, when the hit “Virtuous Woman” became well known on the international reggae scene, The Jamaica Observer declared Warrior King “one of the artists who made a difference in 2001.”

And in August 2010, he was recognized by the United Negro Improvement Association (UNIA) Marcus Garvey Awards for his contribution to music.

He continues to tour the world, including Europe, South America and the United States, and, in April 2011, he completed a tour with renowned reggae singer, Luciano, focused on raising funds for countries that had suffered natural disasters, such as Japan.

This year, Upfront Theatre Foundation is also staging, as part of the 2015 Rastafest program, a three-day Rastafari/Reggae Film Festival, which starts today — Wednesday, August 19 and runs until Friday, August 21.

The film festival, that is being held at the Carlton Cinema at 20 Carlton Street in Toronto, will feature a free-admission panel discussion each day between 5:00 P.M. and 6:30 P.M.

On Wednesday, there will be screenings of short films and documentaries; Thursday — documentaries; and Friday — music videos. Each day there are two screenings: at 7:00PM and 9:00PM, and the admission is $10.00.

The 2015 Rastafest music festival, which runs from 3:00PM to 11:00PM, will also feature emcees, Blakka Ellis and King David, and music will be provided by Boxer Joe, Steady Vybz and the Earth Roots Band.