China’s Economy Has Sounded The Alert; Will Latin America Listen?

Photo above: Costa Rica’s National Stadium, donated by China as a gift for the reestablishment of bilateral ties in 2007, and built in 2009-2010 by a Chinese company with Chinese labour. Photo credit: Diego Arguedas Ortiz/IPS.

SAN JOSE, California (IPS) — For years, Latin America has exported its raw materials to China’s voracious factories, fuelling economic growth. But now that the Asian giant is putting a priority on domestic consumption over industrial production, how will this region react?

China’s dizzying growth gave a boost to the economies of Latin America, and in exchange, this region received manufactured products, credits, and heavy investment in infrastructure.

Given the slowdown in China’s growth, the countries of Latin America have two options: move toward a more value-added economy or lose relevance with an obsolete economic model inherited from the 20th century, said several experts consulted by IPS.

“But this may be about to change,” added the research fellow at the Boston University Global Economic Governance Initiative, where she coordinates the Working Group on Development and the Environment in the Americas’ China in Latin America project and coauthors the China-Latin America Economic Bulletin.

According to Ray, China’s leaders are shifting toward a development strategy with an emphasis on slower but steady growth, which prioritises internal consumption over factory production, thus opening up opportunities for importing manufactured goods from other countries.

The path toward that future, was one of the central focuses of the Forum for East Asia-Latin America Cooperation (FEALAC) meeting in the Costa Rican capital from Tuesday, August 18 to Friday, August 21, which brought together foreign ministers and other senior officials from 36 countries, under the theme “Two Regions, One Vision”.

The experts who spoke to IPS all agreed that given China’s slowdown, decision-makers in Latin America must take the initiative, and propose economic alternatives based on more value added.

But the region has been slow to make the leap. Just five commodities – soy, iron, oil and unrefined and refined copper – account for 75 percent of exports to China, only a tiny share of which are manufactured goods. 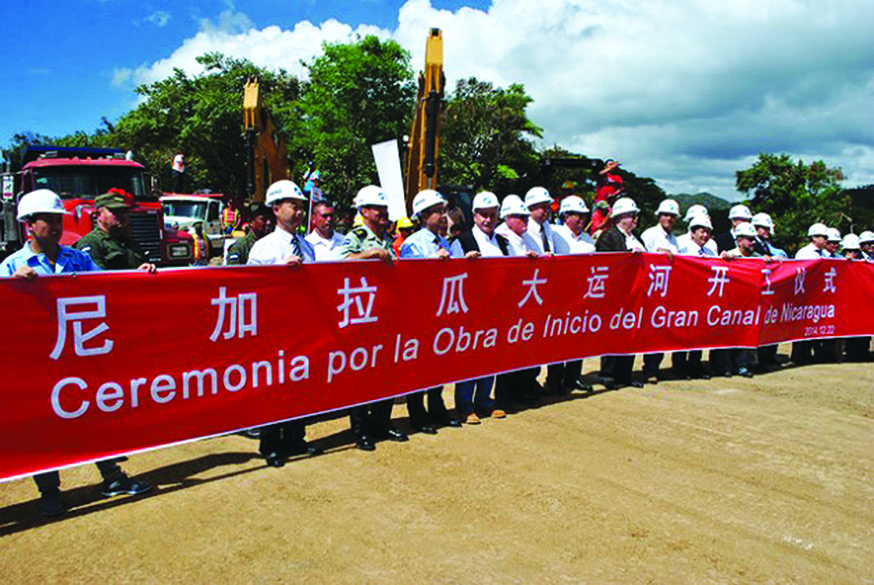 Executives of the Chinese consortium HKDN-Group behind a big banner on Dec. 22, 2014 in the town of Brito Rivas on the Pacific ocean coast, at the ceremony for the formal start of construction of the Great Canal of Nicaragua, which will cut across the country. Photo credit: Mario Moncada/IPS.

But the other major economic flow between China and Latin America, investment in infrastructure, could paradoxically benefit from the slowdown, and the shift in direction of the Chinese economy, the experts said.

The deceleration in the engine of the global economy since 2014, when China’s growth stood at 7.4 percent, the lowest level in 24 years, “May hurt Latin American economies that have become dependent on exporting those few commodities. In contrast, China’s infrastructure investments can help all industries do well,” Ray said.

Well-administered, she said, Chinese-financed projects could close the region’s historic gap in infrastructure, and serve as a platform for the development of other industries that would benefit from investment in transport and energy, two main areas of interest for China.

“Hopefully, policy makers will make use of this opportunity to spur development in non-traditional industries,” Ray said.

Keiji Inoue and Sebastián Herreros, with the Economic Commission for Latin America and the Caribbean’s (ECLAC) International Trade and Integration Division, concurred.

“To the extent that these projects are aligned with the priorities of countries in the region, a greater Chinese presence could help gradually close Latin America’s infrastructure gap, thus strengthening regional integration, and improving the region’s international competitiveness,” they stated in a joint analysis for IPS.

One of the aims of China’s investments in infrastructure in Latin America, they noted, is for that country to invest people’s savings.

But the direction taken by the growing links between Latin America and China, do not leave much room for optimism.

Up to now, the region’s exports to China “Support fewer jobs, generate more net greenhouse gas emissions, and use more water than other LAC (Latin American and Caribbean) exports,” according to a study by GEGI.

China, meanwhile, has been promoting and financing controversial megaprojects in the region, like the “great inter-oceanic canal” in Nicaragua, to be built by the Chinese consortium Hong Kong Nicaragua Canal Development(HKDN-Group), at an estimated cost of 50 billion dollars, and the projected 5,000-km Transcontinental Railway, which would connect Brazil and Peru.

Chinese investment has also fuelled trade ties based on raw materials. According to ECLAC, between 2010 and 2013 nearly 90 percent of China’s investment in the region went into the extractive industry, mainly mining and fossil fuels.

“From that perspective, China’s high level of demand for raw materials at a global level has effectively consolidated and reinforced the specialisation of these processes, also known as ‘re-primarisation’ of the economy,” Enrique Dussel, director of the Centre for China-Mexico Studies of the National Autonomous University of Mexico, told IPS.

But Dussel said emphatically, that the countries of Latin America will have to respond, given the signals. “It is Latin America and the Caribbean that have the responsibility – and need – to make a decision, not China,” he stated.

This refocusing of the economies of the region, on the production of primary commodities for export, happened when Latin America was seduced by last decade’s high commodities prices, and prioritised exports of raw materials over exports of greater added value.

Raw materials represent more than 60 percent of the region’s exports – the highest proportion seen since the early 1990s, according to ECLAC studies – up from 44 percent at the start of the century.

Manufactured goods like machinery and electronic devices, meanwhile, make up 64 percent of China’s exports to this region, and are less sensitive to price swings.

Dussel said China’s growth highlighted the serious problems faced by the region’s exports. In his view, the problems do not necessarily lie in the predominance of raw materials, but in the fact that these industries have “very little value added and technology.”

ECLAC’s Inoue and Herreros say that the shift in focus of China’s development presents an opportunity.

They said that “in simple terms, China’s rebalancing is aimed at reducing the relative importance of investment, and exports in its economic growth, relying on household consumption playing a larger role.”

“To the extent that this process has an effect, it should favour the diversification of Latin America’s exports to China,” they said.

They expect sectors like agribusiness and processed food to become more important in the region, although they warn that it could take years for the effects to be felt, and say that in order for that to happen, decision-makers would have to take ambitious steps toward consolidating the region as a trade bloc.

“We must also make more decisive progress towards a truly integrated regional market,” Inoue and Herreros wrote. “That would make Latin America more attractive and increase its bargaining power vis-à-vis China, the rest of Asia and other big global economic actors.”