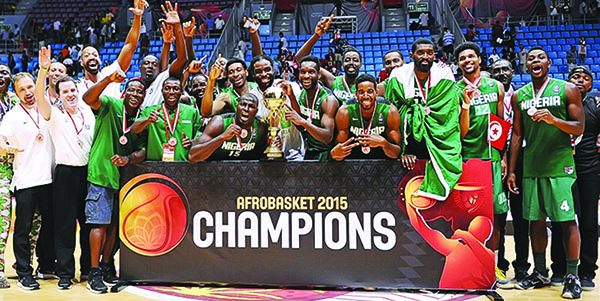 FIBA (Fédération Internationale de Basketball) is an association of national organizations which governs international competition in basketball. The AfroBasket tournament was to determine which country would qualify for Rio Olympics basketball tournament in 2016.

Nigeria’s qualification for Rio adds them in a list of three other teams that have already qualified for Rio – United States (qualified after winning the 2014 FIBA World Cup), Australia (they defeated New Zealand in an home-and-home series) and Brazil (the host nation always gets an automatic bid into the Olympic Games).

Obviously after much excitement and jubilation, I wondered whether this success would translate onto the international stage. Currently, Nigeria is ranked 24th in the world (one spot ahead of Canada). What this means is that the basketball program in Nigeria is doing fairly well but it has fallen short of many expectations.

Could this AfroBasket title, potentially, be the beginning of something special?

I was born in Nigeria but spent most of my life in Canada. So when I speak about the World Cup of Soccer, the usual comments are filled with overtures and undertones of the potential greatness of the Nigerian soccer team. People often talk about the many good Nigerian players who play for club teams in Europe and why doesn’t that translate into success for the national team?

This expectation that comes with having potential, or the attributes to become good or great, is normal. If you follow that logic, it’s not a surprise that fans expect Nigeria to have great teams in any sport, including basketball. I liken it to the idea that if you find a golden nugget at the foot of a mountain, then there surely has to be more gold in the mountain. This analogy reminds me of Hakeem OIajuwon, when he was drafted by the Houston Rockets back in 1984.

In sports, when a “gem” of an athlete is discovered, there is usually a herd of basketball decision makers who send scouts to mine for more talent in that region.

That was the expectation once Olajuwon came on the scene and started to display outstanding basketball IQ and skills, but instead of unearthing more Olajuwons, players like Yinka Dare and Michael Olowokandi made it to the NBA. Dare lasted only four years in the NBA with career averages of just 2.1 points and 2.6 rebounds per game. Olowokandi was drafted with the first overall pick by the Los Angeles Clippers, in 1998. His NBA career lasted nine seasons with averages of 8.3 points and 6.8 rebounds per game.

Many of these scouts hoped they would find another big-man like Olajuwon who possessed such graceful footwork on the basketball court. They hoped to get even a fraction of the one of the greatest Centers to ever play the game.

Olajuwon was the golden nugget and Nigeria was the mountain.

To say the least, anyone who expected Nigeria to produce more top-notch basketball talent) back in the 80’s and 90’s was gravely disappointed by the crop that followed “Hakeem the Dream”.

That’s not to say the talent didn’t exist during the 90’s in Nigeria, but the spotlight remained on the talent in the NBA. The reality is that most fans, including myself, pay little attention to Nigeria basketball players around the world, unless they play in the NBA.

Ime Udoka is a prime example of this. Udoka, who is now an assistant coach with the San Antonio Spurs, was completely unknown to me until I saw him play in the NBA. He was undrafted during the 2000 NBA draft and played in various leagues before getting his opportunity with the Los Angeles Lakers in 2004. He spent the 2004 season split between the Lakers and the North Charleston Lowgators of the National Basketball Developmental League (NBDL) and a team – Club Baloncesto Gran Canaria – in Spain. Udoka was finally able to stick around in the NBA from 2006 to 2011, where he spent most of those years with the Spurs.

Much like Udoka, the Nigeria men’s national basketball team hashad their ups and downs.

The D’Tigers defeated Angola by a score of 74-65 and became only the third team to unseat the mighty Angolan men’s basketball team since 1989. For Nigeria, this victory caps many years of finishing second or third – to be exact, Nigeria has finished in second and third place 3-times each since 1995.

The reason for the breakthrough in AfroBasket might be due to coaching – they have a new coach in William Voigt. According to a Nigerian media publication, the Premium Times  “Coach Voigt was the Head Coach/General Manager of the Bakersfield Jam of the NBA Development League from August 2009 to July 2014, during which he won more games than any other Coach in the D-League and helped his team to be regular season Champions in 2012-2013.”

Bringing Coach Voigt to run the team definitely made a difference but one cannot ignore that approximately eighty per cent of the Nigerian roster have been representing the country at various tournaments over the past few years. This speaks to the chemistry between the players.

It might be that a combination of coaching and play chemistry played a major role in finally reaching the top of African basketball.

The next step is to keep building on this momentum on the international stage. Nigeria’s recent basketball history has shown us times where progress is immediately followed by regression.

For instance, the one-point loss to Germany in the knock-out stage of the 2006 FIBA World Championships simply salivates one’s basketball palate into wanting more performances like that – especially since it was against a perennially strong German team – only to be followed by not medalling at all in the 2007 AfroBasket tournament.

For fans of Nigerian basketball within the country and elsewhere, the hope is that this African title amounts to more African titles.

The hope is that this African title translates to a very noteworthy showing in Rio, or elsewhere on at international competitions.