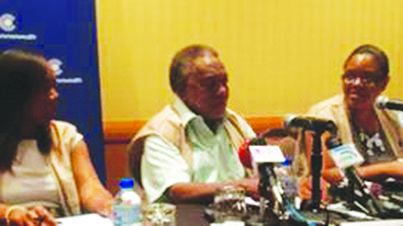 Commonwealth Group Pleased With Election Process In Trinidad And Tobago

PORT OF SPAIN Trinidad CMC — A Commonwealth team that observed Monday’s general election said, it re-affirmed the country’s record of “peaceful and credible elections that demonstrated the commitment of the people of Trinidad and Tobago to democracy”.

PNM leader, Dr. Keith Rowley, will be sworn into office on Wednesday.

“Based on our observation and consultations with a broad range of stakeholders, our preliminary conclusion is that the poll was inclusive, peaceful and well conducted,” said Sir Paul Tovua, who headed the Commonwealth Observer mission.

He told a news conference that the minor shortfalls observed, to date, by members of the group, are not significant enough to question the credibility of the outcome.

He said, the Commonwealth Observer team wanted to commend the people of Trinidad and Tobago “for the peaceful and orderly manner in which they exercised their franchise” adding, “the electoral environment on polling day was conducive to the free exercise of the people’s franchise and basic freedoms were respected”.

But he noted, some of the presiding officers and polling staff “were not very familiar with the process” of intermixing of special elector ballots and ordinary ballots.

“However, we note that, where misapplication of procedures was made, they were promptly rectified. Although this resulted in a lengthy and arduous process, we were satisfied that polling officials were carefully following the prescribed rules for accuracy and transparency.”

Sir Paul also told reporters that it was necessary for Caribbean countries to deal quickly with the issue of social media and its use in election campaigns.

“In this days and age, when media is well advanced, I think it is …up to the countries that they should be looking at ways to address certain issues, so that it does not become a negative, in terms of campaigning and electioneering,” he said.

The elections were also monitored by a team from the Caribbean Community (CARICOM).