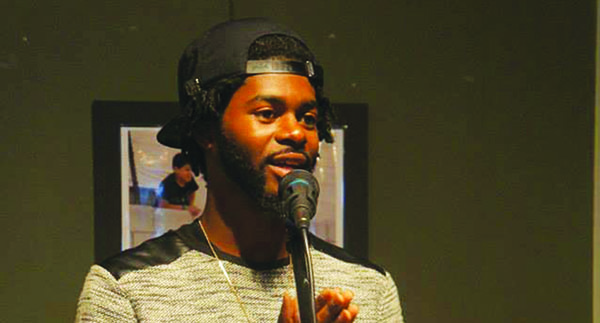 The R.I.S.E. Of Randell Adjei

Photo above is of Randell Adjei. Photo by Jeannine Pitas.

TORONTO, Ontario — It’s true a lot of bad things happened in August, like shootings and stabbings, but Randell Adjei had nothing to do with that. In August, he was very, very busy. Adjei was working hard to give young people an outlet for their issues and energies, to steer them away from bad choices.  Like the shootings and stabbings he knows firsthand.

“When I was 17, I was stabbed in my back,” Adjei, in his endearing, conversational tone told riders on the packed 2015 Freedom Underground Train in the early hours of August 1. He was one of the featured performers on the midnight subway trip from Union Station to Downsview, organized by A Different Booklist bookstore to usher in Emancipation Day. “I was stabbed in my back twice, by some brothers moving backwards in life,” Adjei recited from his popular spoken word poem, The Journey.

Adjei is “known to the police.” He openly shares that background information at many of his public appearances, weaving anecdotes about his escape from the life of suspensions from school, street fights, thefts, and miscellaneous petty crime.

“The Journey is a compilation of different pieces of my poems,” says Adjei. “It’s the journey of my learning, my friends learning. It allows me to go into my feelings about my experiences.”

On August 7, Adjei was at Evergreen Yonge Street Mission hosting the launch of the August-November 2015 issue of Street Voices magazine. He was featured on the cover, with the tag line “Rise Up Against all Odds.” Again, he shared some experiences with the audience.

He told the story about the time he was coming out of a nightclub and heard gunshots. He shrugged it off and continued on his way, only to find him and his group of friends being robbed at gunpoint a short distance away. He managed to break free and run to ask for help from another group of young men he saw nearby. They responded by robbing him and beating him up for what he says “felt like half an hour.” He had to fight like a wild animal to save his life.

“In life, you have to fight; to find it in yourself to overcome,” Adjei tells the gathering.

Several times in August, Adjei performed before enraptured audiences, sharing stories of his struggles and his turnaround from being a statistic of the Youth Criminal Justice System, to him founding R.I.S.E – Reaching Intelligent Souls Everywhere – in Scarborough in April 2012.

Adjei started RISE as an open mic sharing of poetry and stories with a group of 20 young persons in a small youth resource centre at Scarborough Town Centre. Attendance grew rapidly and in quick time RISE Poetry Mondays had a regular turnout of over 100. RISE eventually moved to its current, bigger location at Burrows Hall Community Centre on Progress Avenue.

RISE regularly organizes programs for artists and advocates of various social causes. These include artist development and professional skill building, mentoring workshops in schools, social activities and community events in collaboration with other groups. Adjei, a “spoken word edutainer and artivist” is the creative director of the group, now called RISE Edutainment.

Adjei says his message to people is that they have overcome more than they think. “Take a moment to recognize your past is not meant to define you,” is one of his many nuggets of wisdom. At the Street Voices party on August 7, he shouts out from the stage what has come to be a motto for both Adjei and RISE: “We suffer to inspire.”

The response is an appreciative roar from the audience. What is Adjei’s magic?

“He is not a phony, he is honest about his past,” says Anthony Gebrehiwot, coordinator and photographer with RISE, who joined about two months after RISE started, having first met Adjei at the group’s third poetry night. “His story is one a lot of youth can relate to.  Randell makes young people realize that instead of being on the streets, you get to channel what you are feeling and let it out.”

One young person that Adjei was able to reach and rescue with RISE is Rene Henry, who performed at the Street Voices event. When she stepped on stage, her pink ukulele and understated presence did not suggest anything special, until she sang. Giving one of those stunning “what a voice” moments with a number she had introduced as “the first song I ever wrote, and RISE poetry is the first place I ever performed it, and it’s because of RISE I am still here.”

Later, with Adjei back in his host role, he tells the audience: “Raise your hand if you have had struggles.” Lots of hands shoot up from the approximately 110, mostly youth, including Rene Henry’s.

The only child of her mom, who had her with a dad of seven by six mothers, Henry says she felt abandonment and loneliness growing up. “I had no siblings, no one to talk to, so I became very insecure and detached.” Just before she turned 16, her boyfriend committed suicide. A few days before, her grandfather had passed. Her recovery story from the depression that followed includes being able to attend the University of Toronto later on. However, around 2003, her spirit was sinking again.

“I was struggling, I was not going to any classes,” says Henry, who met Adjei through a mutual friend around that time.  “That took me to RISE and RISE took me to confidence.”

Adjei engages his audience with mantras and affirmations from his poetry. He often asks them to repeat the line, “I am not my struggles, I am not my pain, they are just roadblocks proving how far I came.”

His appeal cuts across age and racial groups. Mara Herscovitch frequently attends RISE poetry nights. The Jewish Canadian senior says she is usually the oldest person at Rise and is “always made to feel very welcome.” Adjei first landed on her radar about 18 months ago at another spoken word event featuring Mustafa the poet, who mentioned RISE and invited Adjei on stage. Herscovitch found him “very inspiring and very compelling, with a lot of natural energy – a beautiful soul.”

However, the main reason for her gushing praise is Adjei’s journey.

“He’s turned himself around. That fascinates me,” says Herscovitch. “Anyone who changes his life that way has accomplished something major. But he’s done it so early. He’s a star.”