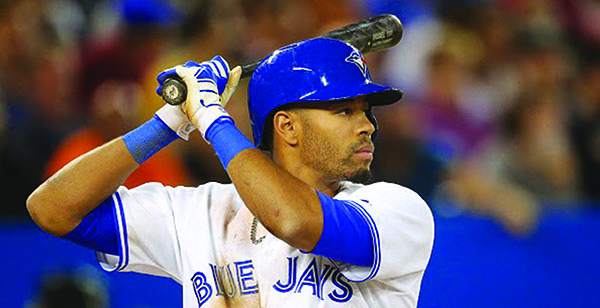 Photo above is of Dalton Pompey. Photo credit: www.bluejayhunter.

It is September in baseball. This means Major League Baseball teams in postseason race are making moves for October (MLB postseason). They are looking to add depth to their rosters for the postseason run.

For Pompey, this call up is a wonderful opportunity to return home

The 22 year old Pompey is a Mississauga, Toronto native who was supposed to helm the center field position for the season. He played in the 23 games to start the season but was sent down to the minor league affiliates of the Blue Jays – the double-A New Hampshire Fisher Cats and the Buffalo Bisons – due to poor play

He played a total of 96 games in the minors – 31 games with the Fisher Cats and 65 games with the Bisons.  He hit 351 with six homers and 22 RBIs and .285 with a home run and 18 RBIs respectively for those teams. Those numbers were a strong contrast to the poor .193 average with two home runs and six RBIs he had at the beginning of the season.

During his time in the minors, he was replaced at center field by Kevin Pillar, another young talent who seized the opportunity given and has produced strong play for the team, especially on defense.

Young players get sent to the minors quite often for many major league teams. It is done for various reason – as mentioned earlier, teams do this around this time of the year, but sometimes it is done so the player being sent down can work on a few things about their game, with the goal of being recalled back up to the majors.

Many young players in the majors might lose confidence if things are not going particularly well for them. Their statistical numbers begin to suffer and they might got through a long slump.

Sending them down to work on a few things is a very calculated move. One which worked out really well very Pompey.

With only a month left in the MLB season, the Jays are twenty games above the .500 mark and have held on the to the first place spot, in the American League East standings, for most of the past month – the time was right to bring back Pompey.

The September call-ups were the prudent thing to do, for a team that wants to keep its players fresh, and also to have depth at every position. Blue Jays manager, John Gibbons, explained the moves to the National Post on their website:

“Kawasaki gives us an extra infielder, Pompey an extra outfielder… You don’t want to overload everything but those guys fit a role we could use.”

Pompey gets to return home and be a part of what is already something special, and could become even more special in the postseason. Although he does not have his starting position back, this opportunity and experience should be a boost to his confidence.

His contributions might come sparingly for now, but his improving bat, and his speed should garner him a spot on the team in the near future.

The very same day he was called-up, Pompey was put into the game as a pinch runner in the 7th inning, he promptly stole second, and moments later he stole third – at the plate was Pillar (the man ahead of Pompey on the depth charts). The game was tied at two, and Pillar hit a sacrifice fly ball which allowed Pompey to score the go-ahead run.

Pompey showed that even in a limited role, he can be called upon to make a difference in the game.

“There is Dalton Pompey, that’s what they got him here for”

This comment was from the Jays play-by-play announcer, Buck Martinez as he stole second his first day back with the team. He was talking about Pompey’s speed as being the main reason why he is back on the majors. This might be true, but the young Canadian who was supposed to stay as the team’s center fielder has more tools in his toolshed.

In the 2014 season in the minors, Pompey batted .317 with 9 home runs, 51 RBI, and 43 stolen bases. Those numbers are what got him his call-up at the beginning of this major league season. This just shows that he can do more than stealing bases

On his Twitter account, Pompey posted “Christmas came early!” when he got word of his September call-up.

Christmas might be even better for him, and the city of Toronto, if the team continues to play this well deep into the MLB postseason.