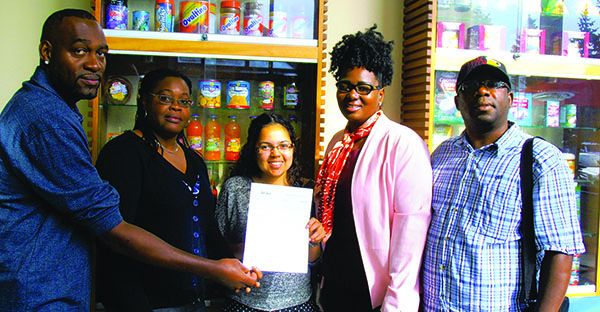 In photo above (l-r): Kyron Lewis, Sophia Mc Larty and Alexandria Mottley of GraceKennedy (Ontario), and Jane Corion and Floyd Hazzard, with a copy of the agreement under which 10 bags of race were supplied in support of the Dominica relief effort. Photo by Lincoln Depradine.

TORONTO, Ontario — Several thousand dollars worth of food and clothing are being donated to Dominica by a small group of Toronto-based Caribbean nationals, who have responded to appeal to help the Caribbean country that suffered extensive damage and loss of lives last month in tropical storm Erika.

The Dominica-bound items, solicited from individuals and organizations, include some 2,000 pounds of rice. Of that amount, 881 pounds – 10 bags – were donated Monday by GraceKennedy (Ontario).

“We will be looking at sugar now. We’re trying to focus on sugar to see if we could assist the people of Dominica,’’ said Kyron Lewis, a former president of the Grenada Association (Toronto).

He and three other Grenadian-Canadians – Floyd Hazzard, Jane Corion and Louise Noel-Ambrose – are spearheading the Dominica relief effort.

In addition to rice, they also have collected more than 50 bags of clothing and shoes, Lewis disclosed.

He explained that he and his partners had only recently agreed to collect clothing and non-perishable food to send to the Cadrona Home for the Aged and the Bel Air Children’s Home in Grenada.

However, the focus of their efforts changed after Dominica was hit by Erika on August 27, leaving at least 31 dead and dozens more reportedly missing.

In the storm’s aftermath, an appeal for regional and international assistance was made by Dominica’s Prime Minister Roosevelt Skerrit and Grenada’s Prime Minister Dr Keith Mitchell, in his capacity as chairman of the OECS Authority. There was an immediate outpouring of support from organizations in many countries, including Canada.

“We decided that, seeing that they have a more urgent need than we do, we’ll heed the call and assist Dominica,’’ Lewis said. “Our efforts will continue in aid of Dominica but we haven’t forgotten the Bel Air Home and the Cadrona Home in Grenada.’’

Volunteers are packing the supplies in containers for shipment to the Caribbean in coordination with Frances Del Sol, Dominica trade and investment commissioner in Canada.