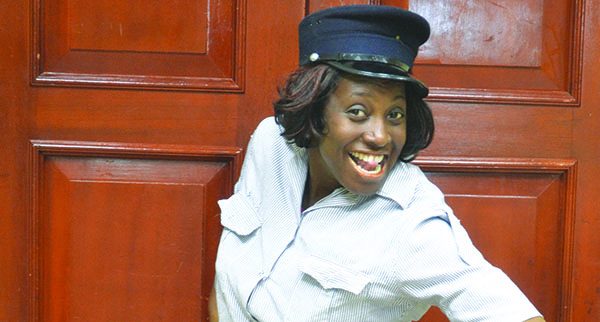 In “Border Patrol”, Delcita Coldwater’s customary ugly Blackface and rotten teeth are ditched for a police uniform and a sparkling, white smile. As the cute police corporal, Delcita will have you in stitches.

Veteran Theatre Practitioner, Michael Reckord, of the Gleaner, described “Border Patrol” as the play with thorough laughter that has as many curves and turns as Fern Gully.

Wright broke hearts when she announced, she would no longer be playing Delcita but, she told The Sunday Gleaner, she is now back — but with a difference.

Wright has done away with Delcita’s characteristics, but has retained her mannerisms.

Many were astounded when the decision was made to abandon Delcita’s character, and in The Sunday Gleaner, Wright gave insight into what really took place.

“There was an issue with the conceptualiser of the character. I don’t own the rights to the character, so basically, I had to be paying royalties to this person. I just decided to do away with this character because, at the end of the day, I own my talent,” she said.

Wright, who plays Delcita and wrote and co-directed this new play, added that she was still in serious demand both locally an internationally and, as such, has once again returned to the spotlight.

“My new play, “Border Patrol”, is currently what I’m promoting. It was written by me and directed by myself and David Tulloch. The play opened a few weeks ago (in Jamaica) and, so far, the reception has been very good. Persons have even come to see it a second time. Andrea ‘Delcita’ Wright has been re-launched with her own face — my pretty face. I’m back on stage,” she told The Sunday Gleaner.

“Border Patrol” exposes and reviews the church wives — church wives who are sold out to spiritual publicity by creating a false image of a healthy marriage; church wives who quote scriptures to defend their activities, or lack thereof, in the private room, says a release from the producers of the play.

Are women pushing their men too far? Are women as faithful as they pretend to be? In “Border Patrol”, answers are provided, including “the man to woman ratio requires sharing to promote a healthier family life”.

Delcita will be her crazy, lively, risqué self in “Border Patrol”, that is being staged in the GTA at three locations: On Friday, October 9 at the Jamaican Canadian Centre, 995 Arrow Rd, in Toronto; Saturday, October 10, at the Hamazkayin Theatre, 50 Hall Crown Place, in Toronto; Sunday, October 11 at the Chinguacousy Secondary School, 1370 Williams Pkwy, in Brampton.