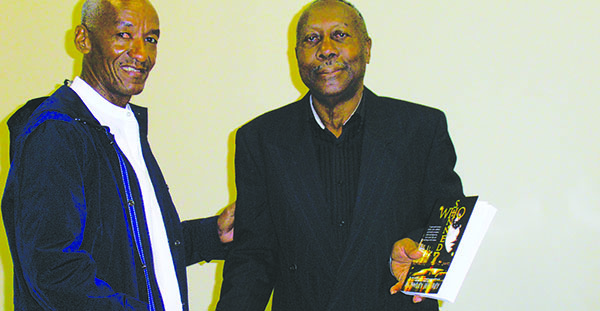 Photo above: Rowley Jeffrey (right) after autographing a copy of his book for visiting Grenadian George Robinson, a former national track athlete. Photo by Lincoln Depradine.

The seeds were planted many years ago, miles away in the Caribbean; now, Rowley Jeffrey is producing the fruits – releasing two fictional novels in seven years.

The York University graduate, and retired paralegal, credits the passion he developed for literature and writing to a deceased English teacher, who also was a longtime principal of the Grenada Boys’ Secondary School (GBSS).

“The late H.D. Baptiste (Daddy Bakes)’’, according to Jeffrey, endeavoured to impart “the value and the beauty of words’’.

“Those who knew him will agree that our little island was literarily enriched by his ubiquitous dispersal of syntax. Mr. Baptiste was a mild-mannered gentleman of decorum, with a humorous dash of eccentricity. His dedication to service was nonpareil and indeed he cast a mighty academic shadow,’’ Jeffrey said recently at the Toronto launch of Who Sinned?

The launch, at Tropicana Community Services, follows the 2008 release of Gems in the Cracks, which made it to the long list of nominees for the 2010 IMPAC Dublin Literary Award in Ireland. This year, 142 books have been nominated by libraries worldwide for the award that carries a winning cash prize of €100,000.

Matriarchal figures are central to both novels, with Who Sinned? a bit more “raunchy’’ than Gems in the Cracks, said Jeffrey, who was a games master and head of the English department of a secondary school in Grenada before migrating to Canada.

“This novel, like my first, Gems in the Cracks, celebrates the magnanimity of a matriarch to children who are not biologically hers,’’ Jeffrey said.

Jeffrey, who also has studied at Hertfordshire University Law School in England, said it’s not until the final pages that readers discover the answers to some questions in Who Sinned?

The author, a self-confessed avid footballer and sailor, described Who Sinned? as a “spiritual fiction with dramatic juxtapositions of murder and love, temptation and fidelity, faith and forgiveness, adultery and salvation, marinated in romance; and a harrowing courtroom trial. It is a moving story of a man whose life and soul hang in the balance to the end as the people who love and care for him work, pray and agonize over him in dramatic anxiety as he defies them to the end’’.