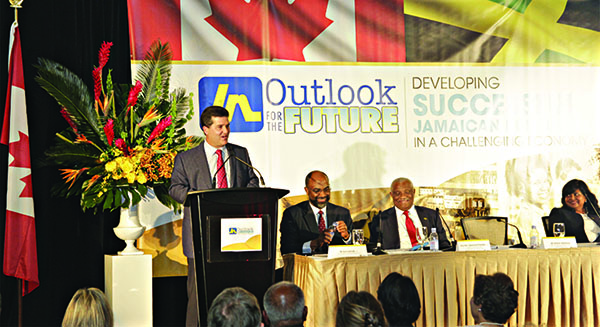 Diaspora In Toronto Told That Jamaica Is Open For Business

Photo above: William Mahfood, President of the Private Sector Organisation of Jamaica and Chairman of the Wisynco Group in Jamaica, addresses Jamaicans residing in Toronto during the JN Outlook for the Future series. Seated at head table, from left to right, are: Earl Jarrett, General Manager, JNBS; Glenford “Glen” Christian, Chairman and CEO of the distribution outfits, Cari-Med and Kirk Distributors in Jamaica and Her Excellency, Janice Miller, Jamaican High Commissioner to Canada.

TORONTO, Ontario — A successful Jamaican business leader says, the country is open for business and everybody is coming, including the Chinese who are building highways, thus making it easier to travel from one part of the island to another.

Glenford Christian, chairman and CEO, Cari-Med Limited, Kirk Distributors Limited and Federated Pharmaceutical Limited, says whenever he is asked about how he manages a business in Jamaica with all of the existing problems, his answer is “business is difficult.”

Christian and William Mahfood, president of the Private Sector Organization of Jamaica (PSOJ) and chairman of Wisynco Group Limited were the keynote presenters, instead of the usual politicians, at the 12th annual JN Outlook for the Future public forum, “Developing Successful Jamaican Businesses in a Challenging Economy,” which was held at the Omi King Edward Hotel in Toronto on October 7.

“For anybody who wants to be successful in business, it is always going to be difficult but if you accept the fact that it is difficult, it is no longer difficult. So the problem is in the acceptance and then you move on,” Christian said.

He said he tells people, who want to get in business just to make a money, that they will not last long.

“If you’re real serious about business, to build business, there is a real difference between building a business and being a true entrepreneur, as against just wanting to make a money. If you just want to make a money, you will not invest.”

He advised that to start a business and do well one has to have an intimate knowledge and understanding of the business.

The Mico Teachers’ College graduate said he got into the pharmaceutical business in 1971 working with H.D. Hopwood Limited for 16 years where he acquired all his sales experience.

In 1986, he started his own pharmaceutical distribution company, Cari-Med Limited with three employees. Today, it is the leading Jamaican distributor of pharmaceutical and consumer goods, with a workforce of over 400 employees.

Christian said opportunities are always there in Jamaica, one just has to look hard enough to find it.

The businessman said when people ask him how did he do it, his reply is, “You can’t do it without people.”

“Part of my success story is developing people, training people,” he said, noting that he has engaged a Canadian university to help him with his company’s three-year strategy plan.

Christian also emphasized the importance of early childhood education. In 2014, he established the Union Gardens Foundation which seeks to forge partnerships to construct state of the art early childhood facilities in low-income communities across Jamaica.

Mahfood said about two-and-a-half to three years ago, Jamaica was facing a meltdown equivalent to what was seen in Argentina and Greece.

He said the fiscal deficit was running at 3.5% of GDP at about $47Billion and is now running at just under $30Billion and at 0.7% of GDP. The unemployment rate was close to 20% and today is just over 13%.

He noted that the recent World Economic Forum Global Competitive Index Report shows an improvement in Jamaica’s position from 97 to 86 out of a total of 140 countries.

“We still have some problematic factors which have impacted on the ability to be competitive as a country and for the business environment, in effect, the inefficiency of our government bureaucracy, crime and theft, and I would like to add to that justice and justice system, tax rates, corruption, and access to finance,” said Mahfood.

He said these are the things that the PSOJ is focusing on, but primarily, it wants to see the removal of the inefficiency in government bureaucracy.

“It is the single, biggest impediment to growth in Jamaica,” he said, noting that over the last two-and-a-half years there have been some initiatives that have come out of collaborative partnerships with the government concerning areas of crises in the country.

“The government formed, along with private sector representatives and the trade unions and labour, and with the church and civil society, the Partnership for Jamaica chaired by the prime minister.”

He sits on it and said the partnership has spun off the Economic Policy Oversight Committee (EPOC) that is co-chaired by Richard Byles and the governor of the central bank.

He said the committee looks at all the measurables under the IMF programme and identifies the areas that need focus, whether it’s on revenue or areas of expenditure, and effectively forms a sort of oversight committee on the economy.

Mahfood said Christine Lagarde, the head of IMF, when she visited Jamaica last year, said EPOC was the first of its kind anywhere in the world and that it was a tremendous outcome of the Jamaican programme — she would try to promote it in other countries.

He said the collaboration that now takes place gives him a sense of real motivation in doing business in Jamaica.

“It says we have a government who is prepared to not only listen and participate but to take advice.”

“What Jamaica is desperately lacking today are young, bright, intelligent people,” Mahfood said, reflecting on the brain drain that happened in Jamaica’s history and the possibilities for the country if all of those people had reinvested their intelligence, capacity, and funds into the country.

Mahfood is very active in outreach programmes in Spanish Town and its environs, and serves on boards of charitable organizations, such as Food For The Poor and The Laws Street Trade Training Centre.

“The economy is stabilizing and I think there are glimmerings of growth. There are a number of things happening in Jamaica that are important — people are investing,” said Olive Clarke, chairman of Jamaica National Building Society (JNBS), noting that what Jamaica needs now is for people to look at it again, in terms of investing money and trying to make the economy grow.

There were several questions from the audience about matters such as extortion, corruption in the customs department, promoting Brand Jamaica, a database of  investment opportunities, and the reduction of public sector bureaucracy.

Mahfood told them to resist extortion at any cost and Janice Miller, high commissioner of Jamaica to Canada, reminded those in attendance of the value of the Diaspora Mapping Project to help identify human capital that may be needed by the country.

“As far as security and extortion, regardless of what anybody will tell you, you can get things done in Jamaica through the channels. They are there and the agencies are there that will work with you to get things done,” Mahfood replied to a question.

Lloyd Wilks, Jamaica’s consul general at Toronto, urged those planning to return to Jamaica to contact the consulate general or high commission for information pertaining to returning residents.

The forum was chaired by Earl Jarrett, general manager of JNBS, who noted that in spite of challenges in the economy, it is still possible to achieve.

Organized by JNBS, the Outlook for the Future series has been held in the USA, Canada and the United Kingdom since 2003.

It has brought together representatives of successive administrations and key leaders overseas to engage in frank, open discussions about issues of national importance to Jamaicans locally and in the Diaspora.

In addition, it provides an environment in which investors can network and explore opportunities for investment in Jamaica.